“Donald Trump and I are committed to suspending the Syrian refugee program and programs and immigration from areas of the world that have been compromised by terrorism,” Pence said. He painted their position as a matter of national security, arguing that the Clinton campaign would compromise the safety of the American people.

In one of the rare debate moments that focused on the records of one of the two candidates on stage, Virginia Sen. Tim Kaine brought up the judge’s decision to block an effort to keep Syrian refugees from being settled in the Hoosier state.

Judge Richard Posner wrote in the court’s opinion that there is no evidence that refugees pose a “terrorist threat” to the U.S. “And if Syrian refugees do pose a terrorist threat, implementation of the governor’s policy would simply increase the risk of terrorism in whatever states Syrian refugees were shunted to,” he wrote.

As TIME reported on Monday, an Indiana non-profit called Exodus sued Pence after he directed state agencies to deny federal funds to groups working with Syrian refugees. The Hoosier State is one of several states facing legal battles over Syrian refugees.

Pence pushed back against Kaine in the debate, arguing that he would continue to put the American people first if he and Donald Trump are elected in November.

“As governor of the state of Indiana, I have no higher priority than safety and security of people in my state,” he said. “So you bet I suspended that program. And I stand by that decision.” 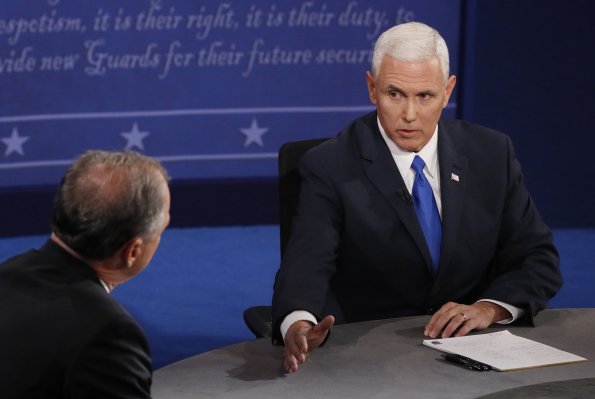 Mike Pence Showed Donald Trump How to Debate
Next Up: Editor's Pick