Tim Kaine Brought Zingers With Him to the Vice Presidential Debate

It’s a well-worn strategy for these kinds of debates, though none of the lines landed with the kind of punch that past debate zingers have. Pence, by contrast, had fewer prepared lines.

Here are seven of Kaine’s attempts:

Kaine used so many rehearsed lines that he seemed even to be keeping track, at one point acknowledging he’d already used a line six times before saying it again. Pence also called him on the strategy: “Did you work on that one a long time? Because that had a lot of really creative lines in it,” he said after Kaine’s Mount Rushmore critique.

Some other Republicans who weren’t onstage jumped to that same line of attack against Kaine, criticizing him for sounding too “canned”: 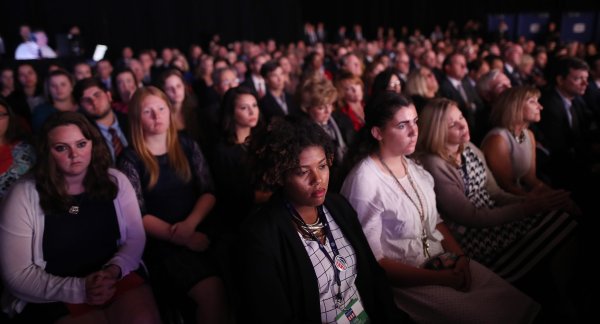 This Photo Sums Up How the Audience Felt About the Vice Presidential Debate
Next Up: Editor's Pick