The forthcoming romantic thriller Allied should probably be most noteworthy for its combination of an Oscar-winning director (Robert Zemeckis), Oscar-nominated writer (Steven Knight) and Oscar-winning lead actors (Marion Cotillard and Brad Pitt—who, to be fair, actually won his little gold statue for producing, though he’s been nominated three times for acting). But early buzz about the movie’s actual substance has been overshadowed by the personal drama surrounding its leading man, which precipitated rumors linking him to its leading woman, which have been vehemently denied if not erased from moviegoers’ consciousness.

If anything, all of this has served as a boost to publicity as the movie enters a crowded field of prestige releases headed for theaters this fall. And a new trailer released Wednesday morning, paired with a sneak peak of footage offered by Paramount on Tuesday, offers new insight into what to expect from the movie itself, which so far looks to be one part Casablanca, one part Mr. and Mrs. Smith, all parts old-fashioned old-Hollywood throwback.

The new trailer depicts a love story gone awry, with Pitt’s American intelligence officer, in Morocco in 1942, falling for Cotillard’s French Resistance fighter, with whom he’s allied on a joint operation, only to find later—post-marriage and baby—that she may be a Nazi spy. If she is, it’s up to him to kill her. The trailer plays up the movie’s action-thriller elements much more than the scenes shared with reporters on Tuesday, which quietly depict the evolution of a working partnership into a steamy romance, propelled by the reckless abandon that accompanies a courtship which may at any point be truncated by the swift and untimely deaths of its lovers.

From what we’ve seen so far, you can expect a lot of stolen glances, an (intentionally) terrible Parisian accent from Pitt and at least one steamy desert sex scene. At the very least, Allied, which hits theaters Nov. 23, offers up beautiful people bedecked in beautiful costumes—which may be more than enough to pack theaters Thanksgiving weekend. 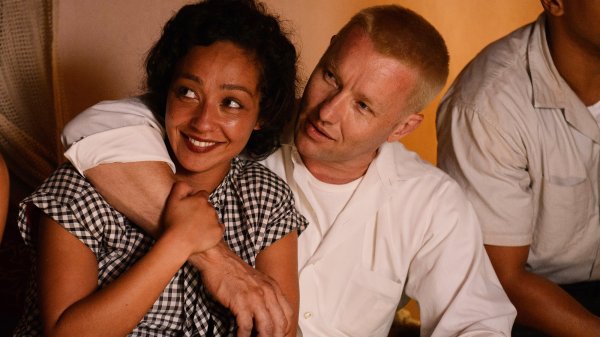 Loving Inspires Interracial and Same-Sex Emojis in Honor of the Upcoming Film
Next Up: Editor's Pick