Was Kim Kardashian a Victim of the Pink Panthers?

The audacity of the assault was extraordinary: Men dressed as police officers stormed a top-end luxury mansion in central Paris in the dead of night, forced a security guard to lead them to one of the world’s most famous celebrities, then tied her up and shoved her in the bathtub, before making off with at least $9 million worth of her jewelry—all without a single police officer being alerted.

As the world soaks up the details of Kim Kardashian’s ordeal, stunned French police and investigators are grappling with two questions: Who could have pulled off a major heist in the heart of the capital, in defiance of France’s national state of emergency? And did Interpol roll up its investigation into the world’s biggest jewelry-thief gang just a few months too soon?

Although police have made no arrests yet, the French media have quickly speculated that the robbery could be the work of the Pink Panthers, a network of jewel thieves from the Balkan countries whose raids have targeted the most valuable gems on the planet. The group — named after the 1963 Blake Edwards movie — has netted about $372 million worth of gems in about 380 heists since 1999, in countries across Europe, and in Dubai, Japan and elsewhere, according to Interpol, the international police organization.

The Kardashian robbery is not the first time sophisticated jewel thieves, including the Pink Panthers, have focused on France, especially during events like Paris Fashion Week, which ends on Tuesday. In March last year, armed men ambushed two secure vans on the highway between Paris and Lyon, and robbed about $10 million worth of jewels inside. A Harry Winston store on Paris’s top-end Avenue Montaigne was robbed twice, in 2007 and again in 2008, with men dressed as construction workers stealing about $35 million worth of jewels in the first robbery, and the same network dressed as women, with wigs and fishnet tights, making off with about $79 million worth of gems a year later.

And, in one of the Pink Panthers’ most audacious hauls, a lone member strolled into an Carlton International Hotel in Cannes in 2013, and walked out a minute later, with $138 million worth of gems, part of a exhibition entitled “Extraordinary Diamonds.”

If the Kardashian operation was the work of the Panthers, it is likely to be a big disappointment to police, who have arrested key figures in the network during the past few years, leading many to believe that it was on the wane. Earlier this year, Interpol ended its nine-year investigation called Project Pink Panthers, saying on its website that it had helped to pool data among governments around the world, and “enabled investigators to make links between crimes in different countries that might not have been noticed otherwise.”

Interpol spokeswoman Rachael Billington told TIME on Tuesday that the organization believes Project Pink Panthers was no longer necessary, since individual police forces now shared the group’s data directly among themselves. “The main aim was to create a network of officers who would investigate these crimes on a national level,” she says.

In town for the fashion shows, Kardashian was installed in the Hôtel de Pourtalès, a hôtel particulier or private mansion, in a neighborhood sandwiched between two tourist destinations: The Madeleine church and the Galeries Lafayettes department store. She was staying in the 350-square-meter (about 3,500 sq. ft.) penthouse with jaw-dropping views of the Eiffel Tower and city around it, and paintings on the wall by Jean-Michel Basquiat and Keith Haring, that rents for around €15,000 a night, according to previous articles about the residence.

For criminals plotting an attack on the selfie-loving Kardashian, it did not require sophisticated detective work to discern her whereabouts. The French business magazine Challenges featured on its site three years ago an article on the hotel, titled “The very discreet hôtel particulier that has seduced Kim Kardashian.”

Gossip sites like TMZ are speculating the theft might have been an inside job, but plenty of information on the star’s movements could be gleaned from her forensic dissection of her own life on social media. Just four days before the robbery, Kardashian posted a photo of her $4-million diamond engagement ring. And mere hours before the robbery she tweeted a photo of herself on a Paris street with her bodyguard Pascal Duvier at her shoulder, and the words, “This guy is always in my shot!”

However Duvier was not “in her shot” after midnight on Sunday, since he had accompanied two other Kardashians to the Paris nightclub l’Arc. He raced back to the hotel after news of the assault broke, and on Monday flew with Kim Kardashian to New York on her private plane.

France has been under a national state of emergency since the night of the terror attacks last Nov. 13, which killed 130 people, just about one mile from where Kardashian was staying. Armed soldiers patrol outside train stations, museums and department stores. Bags are now searched—by unarmed doormen—at the doors of many public buildings.

Yet despite all that, there are deep worries about how to truly secure Paris, which still hosts international salons, conferences and exhibitions virtually every week of the year. Just one night before Kardashian was robbed, tens of thousands of people jammed central Paris late at night for the annual “Nuit Blanche,” an all-night event with street parties, open-air restaurants, fashion shows and museum openings. There seemed to be very light police presence, despite the throngs on the streets.

French officials have for months trodden a fine line of trying to avert another major terror attack, and restoring the normally easygoing atmosphere on Paris streets. That ambiance is essential to Paris. The city’s economy relies heavily on tourism, which accounts for about 500,000 jobs in the city, and it has already been impacted by the terror attacks of the past year. Hotel revenues have plummeted about 20% since the end of 2015, according to industry figures, and restaurant revenues are down nearly 30%. Parisians fear the Kardashian’s robbery could exacerbate things. “This will give a bad image to France, voilà, and to Paris,” one woman told LeParisien.fr on Monday. “This will hit Paris, once again,” another woman sighed.

Paris Mayor Anne Hidalgo assured Kardashian that she would always be welcome in Paris, and in a separate statement warned French politicians not to use the assault as fodder in the presidential elections next spring, for which security has become a pivotal campaign issue. “I have full confidence that the police force, as part of their investigation, will quickly identify and apprehend the perpetrators of these acts,” Hidalgo said in a statement.

Yet judging by the track record of sophisticated jewel heists, there is no knowing whether Kardashian will ever recover her jewelry. And quick arrests are hardly a sure thing. It took years before French police stumbled upon some of the jewels stolen in 2007 and 2008 from the Harry Winston store in Paris; about $19 million worth of the gems were uncovered in a drainpipe in the suburb of Seine-Saint-Denis. Four men were jailed for the robbery in February last year. But the rest of the stolen jewels from those heists have vanished. 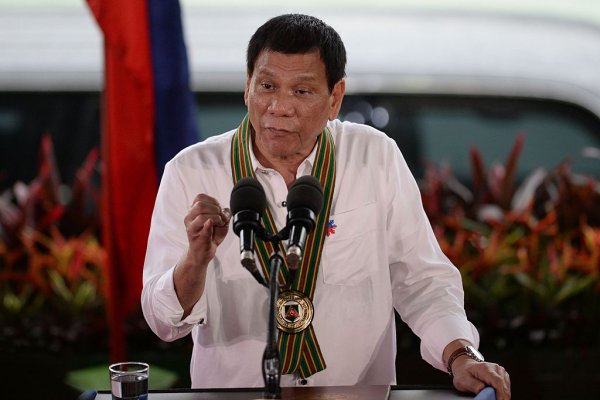 Now Duterte Tells Obama to ‘Go to Hell’
Next Up: Editor's Pick