It was Colombia’s Brexit.

In a result no one predicted – not pollsters, pundits, or politicians – Colombian voters in Sunday’s plebiscite shocked the world by narrowly rejecting a peace accord designed to end Latin America’s longest-running guerrilla war. The “no” vote topped the “yes” vote by 0.5 percentage points in a surprise outpouring of disgust over the agreement’s many concessions to the Marxist rebel group known as the FARC.

It was a stunning setback for President Juan Manuel Santos, who has dedicated his six years in office to disarming the Marxist rebel group known as the FARC. Just one week ago, Santos signed the historic peace agreement in Cartagena before an adoring crowd of dignitaries – all clad in white for the occasion – that included U.N. Secretary General Ban Ki-Moon and U.S. Secretary of State John Kerry. With polls predicting a comfortable victory for the “yes” vote, government officials had insisted there was no Plan B should the plebiscite fail.

Now, the entire peace process is in disarray. Will a bilateral ceasefire that was put in place two months ago hold? Will the FARC push ahead with plans to disarm its 6,000 fighters? And what will become of the U.N. mission that’s already here in Colombia and has been tasked with verifying compliance with the peace accords?

“It’s really a leap into the unknown,” said Adam Isacson, a Colombia expert at the Washington Office on Latin America. For now both the Santos government and the FARC have pledged not to go back to war. In a somber statement Sunday night, Santos vowed to maintain the ceasefire and to salvage the peace agreement in some form – perhaps by renegotiating its most controversial points. He also pledged to meet today with his political opponents, led by former President Álvaro Uribe, who staged an upstart campaign to ambush the signature achievement of his presidency. “I will listen to those who said ‘no’ and to those who said ‘yes,’” Santos said. “Finding common ground and unity is more important now than ever.”

Uribe and other opponents of the peace deal claim that it amounts to impunity for war criminals. Under the agreement, FARC leaders accused of massacres and kidnappings could avoid prison by confessing to their crimes before a special tribunal that was to be set up under a so-called transitional justice system. Government negotiators insist that such concessions were the only way to convince the FARC, which could have kept fighting for years, to lay down its weapons. The justice provisions were endorsed by the U.N. and the International Criminal Court. But over the years the FARC has become so enmeshed in drug trafficking, kidnapping schemes, extortion and other crimes that many Colombians want to see rebel leaders behind bars.

Other provisions in the peace agreement rankled voters. Demobilized FARC foot soldiers were to have received cash stipends, and the organization was to have evolved into a political party guaranteed 10 seats in the Colombian Congress. “If we award delinquents and validate their violence as a way to advance in negotiations with the government we will only be sowing more violence,” said Iván Duque, an opposition senator who urged Colombians to vote “no.”

In Havana, Cuba, where the government and rebel negotiators spent four years hammering out the peace accord, FARC commanders pledged to stay the course. Most are in their 50s and 60s and were looking forward to hanging up their weapons. Rodrigo Londoño, the top FARC commander, blamed Sunday’s outcome on right-wing politicians whom he accused of sowing hatred. But he declared that the rebels had no immediate plans to head back into combat. “The FARC maintains its will for peace and reiterates its disposition to use only words” as opposed to weapons to promote its interests, said Londoño, widely known by his nom de guerre Timochenko.

Another factor in the triumph of the “no” may have been President Santos’s dismal job-approval ratings, which have hovered around 30 percent. He is widely viewed as having focused all his attention on the peace negotiations in Havana while overlooking problems at home, such as Colombia’s economic slowdown. As a result, Sunday’s vote was a kind of referendum on the president.

Finally, there was Hurricane Matthew. It produced downpours and flooding on Colombia’s Caribbean coast where support for the peace process is more robust. The storms severely depressed turnout in that region, according to electoral officials. Nationwide, fewer than 40 percent of eligible voters cast ballots.

Still, there is much within the accords that Colombians agree on. The FARC has pledged to get out of the cocaine smuggling business, help the army locate and destroy landmines, apologize to its victims and use some of the organization’s ill-gotten earnings to compensate them. The government plans to build roads, schools and clinics in the impoverished rural areas that gave rise to the FARC back in the 1960s.

“Everyone without exception wants peace,” Santos said in his speech Sunday. Ironically, Santos was not required to call the plebiscite in order to activate the peace agreement. He was wagering that the vote would give the peace accords broader legitimacy. But his bet failed. 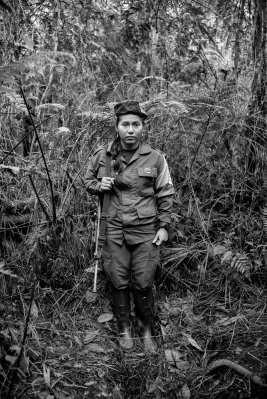 Photographing the Last Days of FARC
Next Up: Editor's Pick