Donald Trump: Hillary Clinton May Not Be 'Loyal to Bill'

Donald Trump’s nine-sentence statement about Hillary Clinton at a Saturday Pennsylvania rally ended up taking 25 minutes when the GOP presidential nominee careened from topic to topic.

His speech included doubts about Clinton’s marital fidelity, an impression of her being sick from pneumonia and opinions about the state of movies in America.

“Hillary Clinton’s only loyalty is to her financial contributors and to herself…I don’t even think she’s loyal to Bill, if you want to know the truth,” Trump said. “And really, folks, really, why should she be? Right? Why should she be?”

Trump did not offer any context, evidence or reasoning for accusing Clinton of disloyalty in her personal life.

He also did an impromptu impression of the candidate suffering from pneumonia at the 9/11 memorial ceremony, pointing to her difficulty walking at the time as a reason for why she cannot make good deals or handle Russian President Vladimir Putin.

As he accused news outlets like the Washington Post and New York Times of protecting Clinton, the Times reported on a partial tax return for Trump from 1995 that indicated he may not have paid federal income taxes for more than 10 years.

Trump also offered an opinion on the state of cinema: “Right now, you say to your wife: ‘Let’s go to a movie after Trump.’ But you won’t do that because you’ll be so high and so excited that no movie is going to satisfy you. Okay? No movie. You know why? Honestly? Because they don’t make movies like they used to — is that right?” 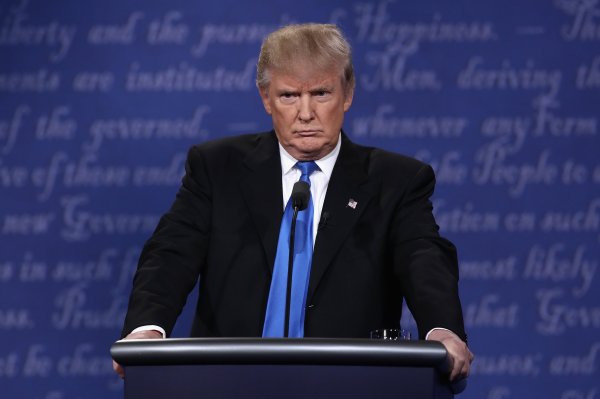 Here's What Trump Got Wrong About Mexico's Taxes
Next Up: Editor's Pick