The Commission on Presidential Debates said in a statement Friday that Republican nominee Donald Trump’s microphone was faulty during Monday night’s first presidential debate, affecting the audio in the hall—but not on the television broadcast.

After the debate Trump remarked about the apparent issue with the microphone as he made his way through the spin room at Hofstra University. As his performance was panned in subsequent days, Trump repeated that his microphone was faulty.

A TIME reporter was the designated pool reporter in the hall Monday night and observed that the audio volume as Trump spoke fluctuated, making him sound quieter on stage. Clinton’s microphone didn’t suffer the same issue. In a one-line statement, the commission said it was due to a microphone issue.

“Regarding the first debate, there were issues regarding Donald Trump’s audio that affected the sound level in the debate hall,” the statement said.

Many commenters remarked on an apparent “sniffling” sound from Trump on the television broadcast. That was inaudible in the debate hall, where the microphone was an issue.

But the issue didn’t impact how the vast majority of Americans watched the debate. Fewer than 2,000 people were in the hall—the tiniest fraction of the more than 81 million people who watched, on television and online and were unaffected by the apparent glitch. 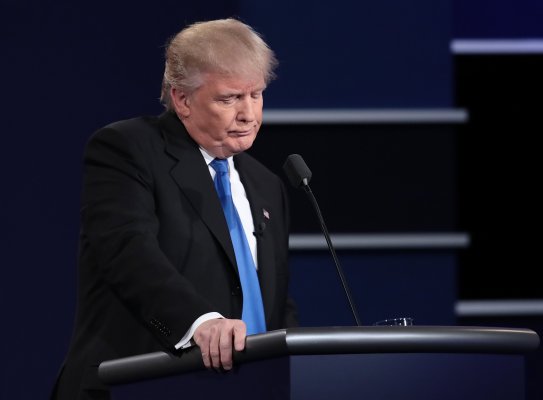 Trump Struggles to Deal With Debate Loss
Next Up: Editor's Pick