As a Latina, I can relate to former Miss Universe Alicia Machado, whose former boss, Donald Trump, said offensive things to her.

One time a male boss called me Maria. “My name is not Maria,” I told him.

A different former boss, also male, said about me, “That Teresa, we pulled her out of the barrio and this is the thanks she gives us.” I didn’t grow up in a barrio. I was born in Chicago and grew up in a suburb.

Miss Universe became a campaign issue after Hillary Clinton referenced Trump’s remarks to Machado during the first presidential debate. Machado said Trump called her “Miss Piggy,” an “eating machine” and “Miss Housekeeping.” “He was overwhelming. I was very scared of him,” Machado said in a video made by the Clinton campaign.

The day after the debate, Trump made no apologies for fat-shaming Machado. He told Fox News: “She was the winner, and she gained a massive amount of weight, and it was a real problem.” And then in a Twitter rant on Friday, he accused her of having a sex tape.

Regardless of whether or not Machado gained weight or has a sex tape, it’s important to remember that she is not running for president. Trump, however, is. And he’s one to talk about morality when he has been married three times and took the Fifth Amendment to avoid answering whether he had committed adultery.

When I was in school, I was told by classmates that I’m too pretty to be Mexican, or too smart to be Mexican.

Let’s look at the facts about Latinas in the U.S.

One in five women in the U.S. is Latina. By 2060 it is projected that a third of all women in the U.S. will be Latina, according to a report by the White House Initiative on Educational Excellence for Hispanics.

Around 25% of Latinas live below the poverty line. But at the same time, the report found Latina-owned businesses are growing and accounted for more than $71 billion in receipts in 2014.

In three states—Texas, New Mexico and California—Latinas comprise about 50% of the of the total female school-age population.

And more Latinas are going to college than ever before. Over the last 10 years, they have increased their representation in teaching, law, medicine and management professions between 30% and 40%.

Trump’s lack of understanding of race and ethnicity also showed when he said in the debate that African Americans and Hispanics in the U.S. “live in hell.”

Sorry, Donald. We don’t all live in hell.

In fact, more Latinos are moving to the suburbs. More than 59% of Latinos in large metro areas live in the suburbs, according to the Metropolitan Policy Program at Brookings.

What Trump can’t see about Latinos and other people of color is that we aren’t all poor and suffering. And even those who do struggle should be treated with dignity.

And we’re not all undocumented.

Around 65% of Latinos in the U.S. were born here, according to Pew Research.

Here is one fact that should really concern Trump and the Republican Party.

There are 57 million Latinos now in the U.S. Some 27.3 million are eligible to vote, according to Pew. That is four million more eligible Latino voters than in 2012.

Machado, who recently became a U.S. citizen, will join millions of other Latinas and Latinos voting in this presidential election. 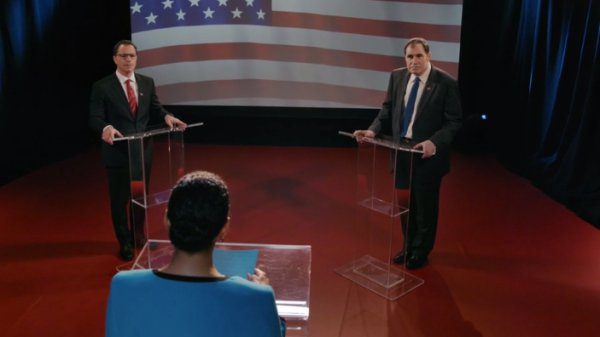 See the Tricks Candidates Use During Debates
Next Up: Editor's Pick