Sudan Has Been Accused of Using Chemical Weapons Against Civilians

Jebel Marra, a 3,000-square mile volcanic massif in the center of Darfur, Sudan, is the historical homeland of the Fur ethnic group, who still populate the area. Like many parts of Darfur, Jebel Marra has been besieged by violent conflict for more than 13 years.

The Sudanese government’s ongoing military campaign in the area, which began in January, is the most recent illustration of a catastrophic pattern of violence.

The military campaign in Jebel Marra was ostensibly launched to attack and gain control over positions held by the Sudan Liberation Army/Abdul Wahid faction, the armed opposition force that controls and contests territory in the area. Hundreds of civilians have been unlawfully killed during the attacks. The absence of a formal armed opposition presence inside the villages where most civilians were killed reveals a military strategy that appears to include targeting the entire population.

The U.N. estimates that as many as a quarter of a million people may have been forcibly displaced by the current violence. But the real number is elusive as many, if not most, of the conflict-affected population has been forced into areas outside of government control, where for years the authorities have denied access to peacekeepers, aid workers, journalists and human rights investigators. As a result, these displaced people in Jebel Marra remain vulnerable to ongoing attacks and without access to urgently needed humanitarian assistance. And their plight has gone largely unreported.

Of the tens of thousands of people who have fled outside of Jebel Marra, their only option for refuge was often immediately outside the U.N.-African Union Mission in Darfur (UNAMID) peacekeeping base at the northern tip of Jebel Marra. The safe haven and relief being delivered by peacekeepers and humanitarians to the people around this base provide a crystal clear example of the vital role that peacekeepers and humanitarian aid groups can and should continue to play in Darfur.

However, the support being provided at the UNAMID base also illustrates the inadequate nature of the protection and assistance.

Civilians have been killed within the base’s protective perimeter; camp residents have reported numerous incidents of sexual violence when they attempt to leave the base to gather firewood essential for cooking; UNAMID flights to its own base have regularly been cancelled by the government; and humanitarian convoys carrying urgently needed supplies, including water, have been prevented from reaching the base. These shortcomings often have fatal consequences.

There is also credible evidence strongly suggesting that the government of Sudan has used chemical weapons throughout its campaign in Jebel Marra.

Scores of survivors and caregivers have provided Amnesty International with substantial testimonial and photographic evidence that supports these allegations. They described a wide variety of ailments that victims experienced during the hours and days after exposure to the alleged chemical weapons agents, including very severe, often fatal, gastrointestinal and respiratory problems. Severe dermatological and ocular problems were also reported, their breath developed a putrid smell, and their urine often turned red.

Two chemical weapons experts independently reviewed the clinical signs and symptoms described by the testimonial and visual evidence. Both experts found there was credible evidence to strongly suggest that chemical weapons agents were used in Jebel Marra, concluding the clinical signs and symptoms were consistent with exposure to a class of chemical warfare agents called vesicants or blister agents, which include lewisite and sulfur mustard. They also asserted it was possible that survivors were exposed to a combination of chemicals in addition to blister agents.

An exact identification of the specific chemicals allegedly used in the attacks requires the collection of environmental and physiological samples as well as an analysis of weapons remnants—actions which are currently not possible due to the government’s restrictions on accessing the affected areas.

For government forces operating in Darfur, alleged chemical weapons use represents not only a new low in the catalogue of the serious abuses they have perpetrated, but also a new high in the level of hubris displayed towards the international community.

The repeated use of chemical weapons—the prohibition of which is considered to be among the most inviolable tenets of international humanitarian law—inside a region officially protected by one of the world’s largest peacekeeping missions betrays a regime and military structure that does not fear international retribution.

If the 192 states party to the Chemical Weapons Convention—Sudan among them—wish to take their treaty obligations seriously, they must take steps to ensure that the Organization for the Prohibition of Chemical Weapons carries out an on-site inspection.

For more than a decade the international community’s lackluster response to the violence in Darfur has been deplorable, with no effective measures taken to prevent gross human rights violations from recurring. The promise of justice remains illusory, as does the promise of disarmament. Thirteen years of peace talks and agreements have brought no security.

In the absence of just and sustainable peace or a major shift in Sudan’s political dynamics, the international community should approach Darfur under the assumption that its massive humanitarian and human rights crisis will continue for the foreseeable future. The challenge for the international community is to recognize this grim reality in Darfur and to devise a serious, realistic, and long-term plan to address it. The U.N. Security Council must lead this effort.

Darfur’s long-suffering people deserve this, at the very least. 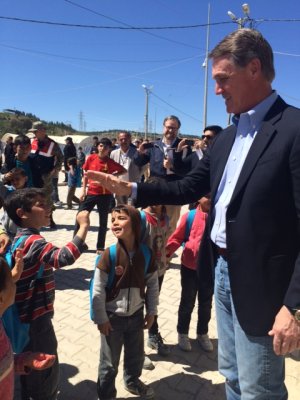 President Obama and Hillary Clinton Made the Syrian Crisis Worse
Next Up: Editor's Pick