What’s Google got up its sleeve? We’ll find out Tuesday, Oct. 4, when the company is holding an event in San Francisco.

Google is expected to use the event to show off new smartphones and other hardware, as well as offer more information about its Internet-connected speaker, a rival to Amazon’s popular Echo device.

While Google hasn’t said exactly what’s in store for the event, the rumor mill is flush with speculation. And the company often releases new hardware right about this time of year. Last year, Google unveiled its Nexus 6P and 5X smartphones on Sept. 29. And two years ago, it announced the Nexus 6 smartphone and Nexus 9 tablet on Oct. 15.

Here’s a closer look at what we’re expecting to see from Google on Oct. 4.

Google is widely expected to show off new smartphones during this event, as it has done in years past. But there’s one big difference: The new devices will reportedly fall under Google’s “Pixel” brand, according to reports from sites like Android Police and VentureBeat. Google smartphones have previously been given the “Nexus” label.

VentureBeat posted what it claims are leaked photos of the new phones, suggesting the upcoming devices won’t look much different than the company’s current Nexus lineup. According to the leak, Google will once again release a phone in two sizes, with the smaller iteration including a 5-inch 1080p screen, 32GB of storage space, a 12-megapixel camera, and an 8-megapixel front shooter. The larger version, said to be called the Pixel XL, will feature similar hardware but with a larger 5.5-inch QHD display and a beefier battery.

Why the name change? It’s probably a move on Google’s part to take more control of its flagship smartphone lineup.

Google works with smartphone makers like LG and HTC to produce Google-branded phones, and these partners largely influence how the phones are designed. Now, this could be changing. The Information reported earlier this year that Google intends to take more control over its branded smartphones. Google CEO Sundar Pichai said this summer that the company would become “more opinionated” about the design of its Nexus phones. Google’s tagline for the event, “Made by Google,” also hints at such a change.

All this doesn’t necessarily mean that Google is going to stop working with other manufacturers to make Google-branded hardware. Indeed, the new Pixel devices are rumored to be built by HTC. It just means Google might give outside firms like HTC more precise guidelines rather than leaving designs largely up to them. Google has been drumming up anticipation for a big change — Hiroshi Lockheimer, Google’s senior vice president of Android and Chrome, recently tweeting the following:

Google demonstrated its Home speaker during its Google I/O developer conference in May. But the company has yet to offer a firm release date for the device, saying only that it would be available later this year. Google could use Tuesday’s event as an opportunity to share more details about when Google Home will launch and what the device can do.

Home is the company’s first hardware product to include the Google Assistant, intelligent software that can answer users’ questions, keep track of their calendar, and so on. Google Home looks to be the company’s answer to the Amazon Echo, which has become a surprise hit with consumers since its late 2014 launch.

Google also used its I/O conference this year to unveil Daydream, a virtual reality platform. So far, Google has offered hardware companies a so-called “reference design” for Daydream-ready VR headsets and controllers, as well as a set of standards for smartphone makers to ensure their handsets are Daydream compatible.

But many unanswered questions remain about Daydream. Which phones will support it? Who’s Google working with to make VR headsets, if anybody? And when might those devices launch? Google could give us some answers during Tuesday’s event.

Google is also said to be developing a separate VR headset that will not require a phone or computer to power it. While a report from Recode suggested Google may have abandoned this project, Engadget followed up with a report that said Google is indeed still working on the device.

Google’s streaming dongle has proven to be one of its most successful hardware products. The company shipped 3.2 million Chromecast units during the first quarter of this year, according to a report from IHS.

Now, the company may be planning to improve the Chromecast by adding 4K streaming capabilities. This new device will reportedly be called the Chromecast Ultra, according to reports from VentureBeat and Android Police, and will sell for $69. Google is expected to offer the Ultra model alongside its non-4K $35 Chromecast. (What is 4K? Learn everything you need to know right here.)

Google is reportedly planning to introduce a new $129 Wi-Fi router during its Oct. 4 event, according to Android Police. Unlike Google’s previous router, the OnHub, this device is said to have multiple access points, allowing several units to be linked together to create one large network. 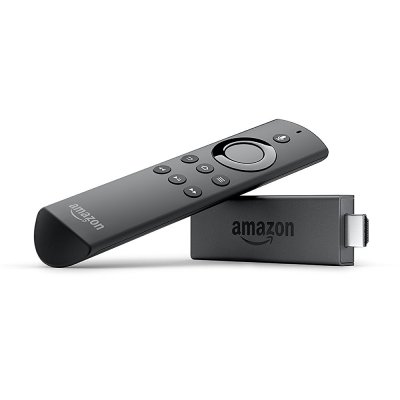 Amazon is Launching a Faster Fire TV Stick With Alexa Voice Controls
Next Up: Editor's Pick