Due to his acid tongue and backing of vigilante death squads, Philippine President Rodrigo Duterte is increasingly likened to a dictator. On Friday, he even made the comparison explicit himself, saying, “Hitler massacred 3 million Jews. Now, there are 3 million drug addicts … I’d be happy to slaughter them,” according to GMA News.

Duterte had just arrived in Davao City, where he served more than two decades as mayor, and first launched the extrajudicial “drugs war” that is now spiraling across the 100 million-strong Southeast Asian nation. Since his inauguration June 30, police and vigilantes have heaped more than 3,000 bloodied corpses onto the nation’s streets, many scrawled with grisly epitaphs like “pusher.”

The 71-year-old’s indiscriminate campaign has strained the Philippines’ already bursting prisons as well as its relationship with old ally Washington. On Wednesday, Senator Patrick Leahy suggested that the U.S. should consider withholding financial assistance to the Philippines in response to the drugs war. Duterte responded by vowing that the latest U.S.-Philippine joint military exercises would be the last.

But the bombastic former lawyer and prosecutor apparently has a new friend in China. Hours before Duterte’s Hitler comments, Chinese Foreign Ministry spokesman Geng Shuang told a news briefing in Beijing that “illicit drugs are the common enemy of mankind” and that “fighting against all drug-related crimes is a shared responsibility of all countries.” Geng added that China “would like to work out a joint action plan with its Asian neighbor in the campaign,” according to the state-backed China Daily newspaper.

Chinese support for Duterte’s draconian drugs war is perhaps unsurprising. China executes the world’s highest number of criminals — official figures are not published, though human-rights groups estimate 2,400 last year — including for serious drugs offenses. Moreover, China has the most to gain by wooing the new Philippine leader, given that Manila had previously been the loudest claimant nation to object to Beijing’s sweeping territorial claims in the South China Sea. Duterte is due to arrive in Beijing for an official visit Oct. 20.

“[Duterte’s] foreign policy will be more pragmatic and balanced, not just relying on the U.S., and not just focusing on security and territorial disputes with China,” says Professor Wang Yiwei, director of the Institute of International Affairs at Beijing’s Renmin University.

Nevertheless, China’s vocal backing for the drugs war is curious, as Duterte has repeatedly taken aim at Beijing for harboring drug dealers, and has also fingered alleged Filipino-Chinese narcotics kingpins by name. In July, while visiting a military camp, Duterte said, “Where is the big fish [in trafficking drugs]? If you want them, go to China. Look for them there,” reports Agence France-Presse.

Beijing has offered to build a huge drug-rehabilitation center on the main Philippine island of Luzon, according to Duterte, though it’s no secret that much of the crystal methamphetamine flooding the Philippines comes from southern China. In addition, the precursor drugs for locally produced meth are generally manufactured in Chinese labs. But it’s unlikely that Duterte will press either this issue or the South China Sea too hard in Beijing. “You won’t see Duterte badger them,” says Joseph Franco, an expert on the Philippines at Singapore’s Nanyang Technological University. “It’s going to be theater, they are going to make a spectacle out of it.”

One reason for a light touch is the economy. China is the Philippines’ largest trading partner, and the archipelago nation’s previously ruddy finances are increasingly unnerved by Duterte’s erraticism. Over the past month, financial markets have fallen as investors have “taken fright,” Gareth Leather, senior Asia expert for Capital Economics, said in a statement Friday. The Philippine peso has dropped nearly 4% since the start of September and is now at its lowest level against the U.S. dollar in seven years. “The President’s erratic and crass style is a concern,” adds Leather.

Invoking the Holocaust is, of course, evidence of precisely just that, even if Duterte isn’t the first Philippine leader to roll out a Nazi comparison. His predecessor, former President Benigno Aquino, warned last year that the South China Sea dispute was reminiscent of Europe on the cusp of World War II. Only in this analogy it was China that was portrayed as the tyrant. “If somebody said stop to Hitler at that point in time, or to Germany at that time, would we have avoided World War II,” Aquino said during a speech in Japan.

Duterte’s contrasting use of the metaphor is nothing but good news for Beijing. 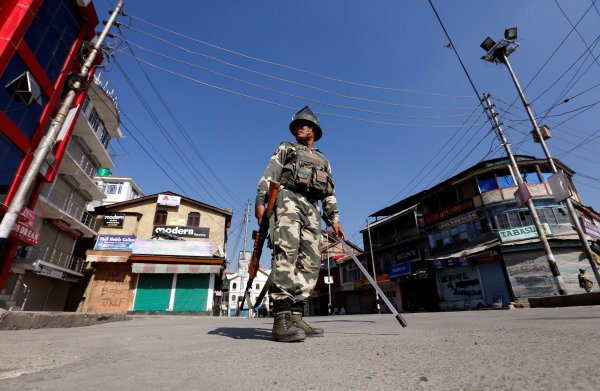