The Growing Case for Shared Parenting After Divorce

Jolie is filing for sole custody of her and Pitt’s six children (seen here in 2011, sans Shiloh)
Splash News
Ideas
By Belinda Luscombe
Luscombe is an editor-at-large at TIME and the author of Marriageology: The Art and Science of Staying Together.

There are many ways in which celebrities are not like us, from the clothes they wear to the jets they fly. And when Angelina Jolie, one of the world’s most famous women, filed for divorce from Brad Pitt, one of the world’s most famous men, she did something else few unfamous women do: she filed for full physical custody of their six kids. Essentially, she wants to bar Pitt from living with Maddox, Pax, Zahara, Shiloh, Vivienne and Knox for any stretch of time.

Jolie, through her lawyer, argued that sole physical custody was best for the “health” of her family. Whether or not she’s right–without knowing the details, it’s impossible to judge–the case is reigniting a debate over what’s best for kids after divorce.

For decades, there was a widely held belief they should have one home with the primary caretaker, often the mother. But that status quo is changing. Absent some mitigating factor, such as an abusive mom or a mentally ill dad, many experts now agree that kids are happier and healthier when they can “maintain and build on meaningful relationships with both of their parents,” says Michael Lamb, who teaches psychology at the University of Cambridge. More often than not, that requires living under the same roof as each parent for significant periods of time–which is possible only under joint, not sole, custody.

These claims are supported by reams of data, but the reasoning behind them is mostly commonsense: when it comes to parenting, two minds are better than one. “One might be better for a particular age or a particular kid or a certain type of problem,” explains Linda Nielsen, a psychology professor at Wake Forest University, who has studied custody arrangements. Dads, for example, are more likely to engage kids in physical play, which helps kids learn how to handle their bodies (no hitting!) and their emotions on and off the field. Moms, meanwhile, are more likely to reason with and socialize kids, which helps them understand how their actions affect others. And even if parents don’t occupy traditional gender roles–or are in a same-sex relationship–depriving a kid of one of them can have devastating long-term effects. A 2007 study found that kids who lived with each of their parents at least 35% of the time were less depressed and had fewer health problems and stress-related illnesses than those who lived with just one parent.

Of course, it’s possible for kids who live with one parent to spend time with the other. Jolie, for example, wants to give Pitt visitation rights to Maddox and Co. But experts say that kind of arrangement can cause “Disney parent” or “Uncle Dad” syndrome, wherein one parent is seen more as a relative to play with than as an authority figure; as a result, he or she is less able to parent in a way that has long-term developmental benefits.

So if psychologists have more or less ruled in favor of joint physical custody, why isn’t it more common? (The most recent figures from Pew Research found that only 22% of U.S. dads who don’t live with their kids see them more than once a week.) Some cite judicial bias, arguing that because mothers have historically been the primary caregiver, they have an advantage over fathers in custody hearings. Others suggest this is the way many dads want it. Parents also have to be able to communicate frequently and cordially for the arrangement to be beneficial, which not all divorcing couples can manage to do.

Nonetheless, shared parenting postdivorce is becoming increasingly common. Consider the rise of nesting, in which exes live in the same housing complex so their kids don’t have to move, and activist groups like Leading Women for Shared Parenting. In the past year alone, Missouri and Utah have both passed laws making joint physical custody the default ruling in family courts (similar bills have failed in Iowa, New Hampshire and Florida). California, where Jolie filed, favors equal custody only when both parents agree to it, and its family-court rulings tend to be “a bit more pro-female than other states,” says Jeffery Leving, an Illinois family lawyer who often represents fathers and has tried cases there.

No matter how that case works out, it’s worth exploring the larger questions it raises–especially considering whose welfare is at stake. 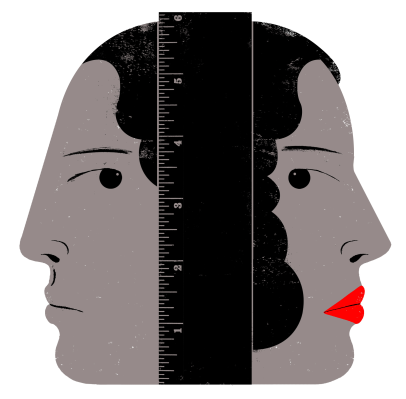 The Presidential Debate: Hillary Clinton, Donald Trump and the Politics of Weight
Next Up: Editor's Pick