The U.S. Has a Weak Hand In Syria—and Russia Knows It

Syrians surround a man as he cries over the body of his child after she was pulled out from the rubble of a building following government airstrikes on a rebel-held neighborhood of Aleppo on Sept. 27, 2016.
Karam al-Masri—AFP/Getty Images
By Ian Bremmer

How fast can a peace deal fall apart? On day one (Sept. 12), a U.S.-Russia-brokered cease-fire went into effect in Syria. By day four, Moscow and Washington were accusing each other of violations. On day five, a U.K.-based NGO was reporting that airstrikes were killing civilians. On day six, a U.S. airstrike killed Syrian soldiers. On day eight, a bomb attack on a U.N. aid convoy killed more than 20 relief workers and the U.N. was forced to suspend all relief efforts. Again, the U.S. and Russia traded charges of responsibility.

On day 12, Syrian fighter jets pounded the city of Aleppo, killing dozens and wounding hundreds. U.N. Secretary-General Ban Ki-moon, not known for plain speaking, denounced the use of bunker-busting bombs as an assault that “brings the violence to new depths of barbarity.” Hundreds of thousands of civilians are trapped inside the city, parts of which remain under rebel control.

We shouldn’t be surprised that a cease-fire couldn’t last. It isn’t even clear whether the Pentagon and State Department agreed on the wisdom of the deal, and whatever U.S. officials say about Syria’s strategic importance, that country will remain much more important for Russia and Iran than for the U.S. Syrian President Bashar Assad is Russia’s only true ally in the Middle East, if only because his survival depends on the Kremlin’s good will and Syria provides Russia with its primary Middle East relevance and its only Mediterranean naval base. The same goes for Shi’ite Iran–Syria is a longtime partner and client state in a Sunni Arab–dominated region.

The Obama Administration continues to insist that Assad must go. But it’s too late for that, even if the latest bombing in Aleppo stiffens U.S. spines. No one in Washington has yet made a credible case that a post-Assad Syria can hold together or that Assad and ISIS can both be defeated. If Donald Trump wins the election, he’ll probably cut a deal with Russia that recognizes Syria as a Russian problem. A Clinton White House would probably continue the Obama approach of criticism without much action, a recognition that the U.S. holds a losing hand.

Ultimately, U.S. plans may depend on how far Assad pushes. Will he settle for consolidating control of the western half of the country that’s already within his grasp? Or will he push to recapture the entire country, a move that would come only at an unimaginably high human cost? One thing is clear: Russian planes in Syria’s airspace and Iranian boots on Syrian ground give Moscow and Tehran a bigger say on Assad and a greater stake in Syria’s future than Washington will ever have. And that’s a reality that the next U.S. President would do well to accept. 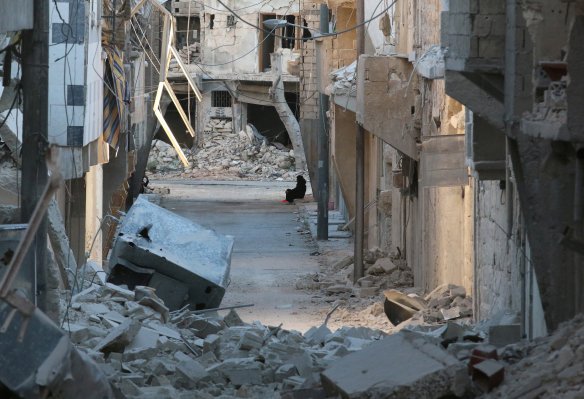