How Real Are the Risks of a Rigged Election?

When Donald Trump began telling crowds this summer that if he loses the race for the White House, it will be because Democrats “cheated,” he was doing more than hedging his bets. He was tapping into a powerful theme of this election cycle: that the voting system is rigged.

“She can’t beat what’s happening here,” Trump told a crowd in Altoona, Pa., in August, referring to Hillary Clinton. “The only way they can beat it, in my opinion, and I mean this 100%, is if in certain sections of the state they cheat, O.K.?” In Wilmington, N.C., he went on to suggest that some people might vote “15 times for Hillary” and pledged to his supporters, via email, to “do everything we are legally allowed to do to stop crooked Hillary from rigging this election.”

That kind of in-person voter fraud has little historical precedent, and there is no reason to expect such fraud in 2016. According to a 2014 study by Loyola Law School professor Justin Levitt in which he collected all alleged and prosecuted cases of in-person voter fraud over 14 years, there were only 31 credible incidents out of 1 billion ballots cast. Insofar as elections have been skewed by human involvement–as opposed to say, weather–it’s almost always because of incompetence or lack of resources, like confusing ballots or voting machines being delivered to the wrong location. But that doesn’t mean Trump’s argument doesn’t resonate: in September, 36% of voters said they were “not confident” their ballots would be accurately counted this year, according to a national poll. That’s up from about 28% in 2004.

Some of the insecurity Americans are feeling is no doubt fueled by the wave of cybersecurity attacks on a variety of Democratic political organizations, which investigators have linked to Russian intelligence agencies. The Clinton campaign has suggested that if she loses in November, it could be at least in part because of the meddling of foreign powers. And that perception–that the electoral system is somehow up for grabs–is the most dangerous of all, even if both candidates announced at the first presidential debate that they planned to accept the will of the voters in November. Voting, after all, is an act of civic faith. If we no longer believe in the veracity of the results, our democratic process falls apart.

To soothe nerves in the meantime, here is a look at six ways that outside forces could try to rig the election, none of which are likely to change the outcome of a national race.

To reprogram the average voting machine, all you need is some cheap equipment and 10 minutes alone with the thing. “They’re ridiculously easy to get into,” says Billy Rios, founder of the cybersecurity firm WhiteScope. One problem is their age. Forty-two states have voting machines in circulation that are more than a decade old and run on software no more sophisticated than that of an “old, stripped-down PC,” says Lawrence Norden, an election expert at the Brennan Center for Justice. Another problem is that most voting machines are equipped with virtually no cybersecurity protections whatsoever. “Your PlayStation console has better protections,” says Rios.

But none of that is a reason to panic, says Merle King, executive director of the Center for Election Systems at Kennesaw State University. The likelihood of someone hacking into enough voting machines to change the outcome of the national election is “very, very low,” he says. One reason is that voting machines are not connected to the Internet, so in order to hack a machine, someone would have to have physical contact with it. That’s not impossible to imagine in a specific district–what if a criminal broke into a warehouse where the machines are stored?–but if your goal is to rig the national election, it creates a significant logistical challenge. Even if a team of hackers were able to pull off that kind of attack, there are other safeguards in place. For example, many electronic voting machines print out a paper copy of each vote cast, so if a machine has been reprogrammed to count more votes for one candidate than another, those discrepancies can be identified and corrected by doing an audit of the paper receipts.

The bigger worry for election officials is the handful of states–including Louisiana, Georgia, South Carolina, Tennessee, Delaware, New Jersey and parts of Pennsylvania, Indiana, Mississippi and Texas–that still use old, defunct electronic machines that don’t produce paper receipts. But even then, the threat to the outcome of the national election is relatively small, says Connecticut secretary of state Denise Merrill. Only about 30% of voters, according to 2012 turnout numbers, will go to polling places that use electronic voting machines this November. The rest will use paper ballots, which are counted either by hand or with an optical scanning machine–methods that, while hardly flawless, are less susceptible to cyberhacks. Call it one of the great ironies of the modern age: the most foolproof defense against high-tech election shenanigans is an ancient technology–paper.

2. STEALING FROM CAMPAIGNS AND CANDIDATES

The hackers who breached several Democratic political organizations this year have already succeeded in affecting the 2016 electoral process. After leaked emails seemed to suggest that top Democratic Party officials favored Hillary Clinton over her erstwhile rival, Senator Bernie Sanders, his supporters cried foul, staged protests and pushed the ouster of the chairwoman of the DNC. Meanwhile, Clinton’s other rivals, including Trump and third-party candidates Jill Stein and Gary Johnson, used the emails to attack the Democratic front runner in campaign materials and stump speeches. While it’s hard to say whether this particular scandal will affect the outcome of the election in November, Democratic officials are bracing for the next round of leaks, courtesy of hackers that federal officials have linked to Russian intelligence.

When federal cybersecurity officials confirmed that in July a group of hackers linked to Russian intelligence had broken into voter-registration databases in Arizona and Illinois, the news shook federal election officials. “That’s definitely not something you want to hear,” says Brian Newby, executive director of the Election Assistance Commission (EAC) and a former election commissioner in Johnson County, Kansas. In the wake of the attacks, the EAC met with the Department of Homeland Security (DHS), the Justice Department, the FBI and other federal bodies to discuss next steps. DHS offered to do security sweeps of state and local networks to ward off future attacks. In the meantime, Newby made clear that even if hackers were to get access to voter rolls, states are prepared. In a worst-case scenario, wherein some cyber ne’er-do-well succeeded in destroying or changing the information in a state’s voter-registration database, the show would go on, he says. Current laws would allow all voters to cast provisional ballots, which would then be checked against a hard copy of the state’s voter rolls. If a voter was registered, his ballot would be counted as normal. Such an attack would significantly slow the process of reporting the results, Newby says, but it would not change the outcome of the election. “Election officials are all about contingency plans,” he says.

When election officials in Maricopa County, Arizona, decided to reduce the number of polling places from more than 200 to 60, they said it would save money by creating fewer but larger “vote centers.” The plan backfired: during the March 2016 primary, thousands of voters, in a county with a large Latino population, found themselves in lines up to five hours long. Many simply gave up without casting a ballot. Lawyers representing Democratic Party officials, and the campaigns of Clinton and Bernie Sanders, called foul, arguing that the county’s decision resulted in the disenfranchisement of mostly minority voters. In September, Maricopa County settled part of the case and agreed to have more polling places available in November. But the dustup underscores the ongoing battle over access to the physical infrastructure of voting on Election Day. For years, Democrats and Republicans have battled over where polling places should open and when access should be granted–decisions that can have a big effect on the groups of people who turn out to vote. In response to these challenges, some states, including New Jersey and Virginia, have passed laws designed to allocate resources per registered voter. In recent weeks, Democrats have been going county by county in Florida, Georgia, North Carolina and other states lobbying officials to add polling places and early voting days–moves that could have a big impact if the election is close.

Since 2010, 20 states have passed new voting requirements that restrict early voting, limit day-of registration and require voters to either prove citizenship or present certain forms of identification to vote. In 2016 alone, 14 states will have new voting requirements in place, according to the Brennan Center. Democratic and civil rights lawyers are in the process of challenging many of these laws on a state-by-state level, on the grounds that the new rules intentionally target poor and minority voters. Some judges have agreed. In July, a federal appeals court overturned a new North Carolina voter-ID law on the grounds that it specifically discriminated against African Americans. Lawyers are hoping to use that precedent to challenge related measures in Virginia, Texas, Alabama, South Carolina and Indiana, to name just a few.

In September, some Virginia voters received letters warning that they were not properly registered–even when they were–and in January, Iowa voters received official-looking citations suggesting they would commit a “voting violation” if they failed to show up to caucus. Both are variations of the darker arts that partisans have used for years to slant the vote. This year the FBI is keeping an eye out for more nefarious ways to keep certain populations from the polls–including everything from calling in a bomb threat to hacking into a news site and posting fake election results. In August, Trump appeared to encourage supporters to take it upon themselves to guard against voter fraud. 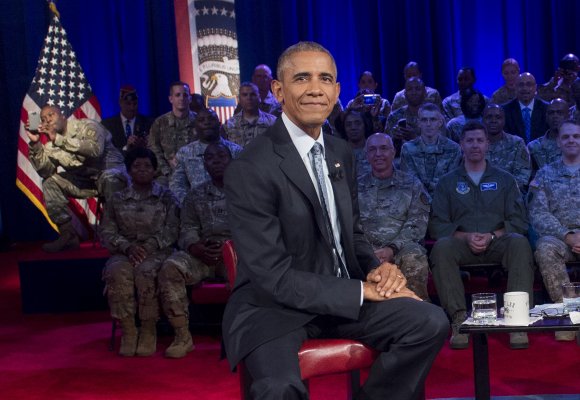