Pro Football Is Coming to China. But Will the Chinese Care?

It’s a few minutes before practice, and helmets and pads are heaped on an Astroturf field hard by Beijing’s smog-choked Fourth Ring Road. The sound of pre-training hip-hop from a nearby boombox merges with whirring angle grinders from the metalwork shop next door. Duane Brooks, wide receiver for the newly minted Guangzhou Power, is showing off his latest accessory: a plushy panda hat. “Some guy outside the hotel was selling them for 20 yuan [$3],” says the 29-year-old Texan with a grin. “I offered him 10. I’m probably the coolest guy in the CAFL now.”

That CAFL, or Chinese Arena Football League, kicks off in Beijing on Saturday as the nation’s first professional gridiron league. There are six teams representing Beijing, Shanghai, Qingdao, Dalian, Guangzhou and Shenzhen in a super series, whereby each team plays one game while all tour those same Chinese cities together. Each team has 20 players, half Chinese and half North American, all of whom are paid $900 to $2,000 per game. It’s a cultural exchange and commercial enterprise that aims to introduce America’s favorite spectator sport to the world’s most populous nation. “Arena football is high-scoring, high-action and the games are often 70-60,” says David Niu, president of Arena Football League Global. “There’s a lot excitement and the fans are sitting right on the walls of the venue.”

Read More: Teachers in Beijing Are Being Held Responsible for Overweight Pupils

But the arena league is just one part of the fast-growing race to bring American football to China. There are now 75 amateur teams in the country—up from less than a half dozen in 2013—boasting around 3,500 players altogether. The 14 teams of the American Football League of China (AFLC) play probably the nation’s highest quality 11-player football. Crowds start at 100-200 for regular season fixtures, ranging up to 3,500 for last year’s championship game. “Team sports are really lacking here in China, and American Football is a great team sport that makes kids tough and cool and independent and possess some leadership qualities,” says AFLC commissioner Chris McLaurin.

Today, both Arena Football and the NFL are clamoring to get a share of China’s 1.4 billion people and all the marketing opportunities that go with it. Both leagues are hoping to follow the example of the NBA, which now has legions of mainland Chinese fans, in no small part thanks to the popularity of former Houston Rockets star Yao Ming. The professional Chinese Basketball Association league is also popular with big games receiving upward of 60 million television viewers. “Financially and in terms of, for example, participation, one could say that China is more of a basketball nation than a soccer one,” says Simon Chadwick, professor of sports enterprise at Britain’s University of Salford.

In truth, sport as a whole is enjoying a revival in China, thanks largely to government patronage. In 2014, China’s State Council vowed to make the sports industry a key economic driver, projecting over 500% growth to reach $750 billion by 2025—some 1.3% of forecasted GDP, in line with the role sports plays is many developed economies. Regulations holding back the sports industry have been slashed, encouraging private investors to build facilities and boost related products and services. And it’s not just about raw economics—organized sports are also seen as a way for to nurture leadership and social skills among young Chinese. “The Chinese government told us that they see American Football as turning Chinese boys into men,” says CAFL CEO Gary Morris.

Read More: The Long History Behind Territory Disputes in the South China Sea

But American football still faces major obstacles in China. It’s difficult to find NFL games on TV in Beijing pubs—in part because they tend to air between 2 AM and 5 AM. Getting hold of proper equipment, coaches and referees is also tricky. Proper-sized football fields are much harder to find than, for example, basketball courts or soccer pitches. That shortage offers an advantage to the CAFL, which offers a slimmed-down version of the NFL and college game, with eight players competing on a smaller 50 by 35 yard indoor field. Going indoor also solves some distinctly Chinese problems. “The main benefit is regarding pollution,” says Darrick Branch, a former NFL wide receiver who now serves as CAFL’s head of operations. “American-level athletes won’t put their bodies through playing in some of the air you get here.”

Of course, while the NFL can’t promise clear skies, it can guarantee you’ll see some stars. During a recent afternoon at a sports complex in northeast Beijing, all-time great quarterback Peyton Manning gives some budding Chinese quarterbacks playing tips. “Don’t step too far when you throw,” he says, twisting his torso slowly with football glued in an advancing right hand. “You only want like a six-inch step. Don’t lose your balance.”

Manning is currently on a promotional tour of China on behalf of the NFL, tossing a football around the Great Wall and giving sporting clinics to kids. The growth of the AFLC is directly linked to such efforts by the NFL. A quarter of current AFLC players were introduced to the sport in tag football teams set up by the NFL at some 70 colleges across China. The NFL has plans to host a regular season game in China in 2018 after scheduling two games in London and one in Mexico City this season. It has also started re-streaming games with Chinese commentary during the Asia daylight hours. (According a January 2015 survey by market research firm Nielsen, 7.9% of Chinese respondents professed an interest in the NFL.)“I met a guy the other day in Shanghai who knew more of my statistics that I even do,” Manning tells TIME. “So there’s a great passion for football over here.”

Historically, soccer rules China, even if basketball has been growing fast among middle-class youth. But that doesn’t mean China is yet any good at either of those sports At the Rio Olympics, China’s men and women lost all their basketball games and finished dead last. China’s men’s soccer team currently sits in 78th place in world governing body FIFA’s rankings — one place below the tiny Caribbean nation of St. Kitts and Nevis, which has a population of just 60,000. China still suffers from its autocratic legacy, as the Chinese Communist Party historically forbad any independent social organizations outside its purview out of fear of any threat to its authority—including sports clubs. This effectively neutered the development of team sports. (Individual pursuits, such as gymnastics and athletics, were by contrast promoted by state sports ministries and enjoy mixed success.)

This dynamic is changing—thanks in no small part to the many billions of private Chinese dollars that have poured into soccer since President Xi Jinping turned his love of the game into official policy—though there remains no culture of grassroots sporting participation to build on. Parents who did not grow up with team sports feel reluctant to allow their children—usually their only children—to “neglect” studies in favor of sport. The onus remains for kids to succeed academically to support aging parents and grandparents, and succeeding at team sports isn’t part of that duty. Nor does it help that American football is seen by many as being inordinately dangerous.

It’s a concern for Beijing mom Catherine Xiong, whose 9-year-old son Hamilton is attending Manning’s quarterback clinic in full pads and helmet. She even read the book Concussion, which explores the link between the full-contact sport and brain damage, and became the basis for a hit Hollywood film starring Will Smith. Even so, Xiong thinks the benefits of football outweigh the risks. “The rules have changed and the equipment is getting better and better,” she says. “It’s a team sport and he can enjoy the team spirit. And I want him to toughen up a bit.”

Of course, China has long embraced martial arts, which carry their own physical risks. And the tactical aspect of football—the plays and packages—speaks to China’s love of strategic games such as chess and Go. Niu hopes that a nation whose youth spend so many hours engrossed in role-player computer games that detox clinics are found in major cities will turn that competitive streak toward the playbook. “Football has taught me a lot,” says Chengdu native Yan Siguang, 33, defensive end for the CAFL’s Dalian Dragon Kings. “You get beat down, you get your ass kicked. Get up, keep going, inch-by-inch. It’s like life.” —With reporting by Zhang Chi / Beijing 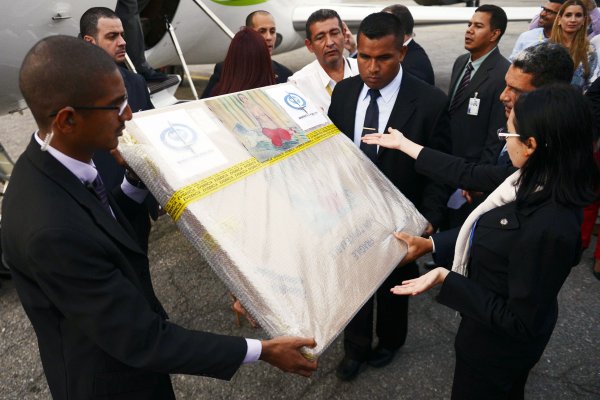 6 Other Stolen Works of Art That Made a Comeback
Next Up: Editor's Pick