In a report published on Thursday, the watchdog group detailed accounts of officers “deliberately shooting” opposition party members and supporters in their legs at close-range, causing the alleged victims permanent damage and in some case amputation of their limbs.

“They’re adopting tactics similar to those once used by the Irish Republican Army and engaging in ‘kneecappings’ of people they have arrested, apparently because they belong to or support an opposition party,” Human Rights Watch’s Asia director Brad Adams said.

In other instances, alleged victims said police would shoot them in custody but later claim it was in self-defense, during a violent protest, or that the victims were caught in “crossfire” — a phrase that has become shorthand for extrajudicial shootings.

The special security force of the Bangladesh police denied the findings of the report, according to the Thomson Reuters Foundation.

Human Rights Watch called on Bangladesh to conduct a rigorous and independent investigation into the so-called kneecappings and of the police officers and commanders involved in the shootings.

“Instead of issuing a knee-jerk denial of these claims, the government should ask the United Nations for expert assistance and ensure that perpetrators are prosecuted,” said Adams. “Sheikh Hasina needs to make it clear that Bangladesh security forces cannot get away with killing and maiming citizens simply because they support the wrong political party.” 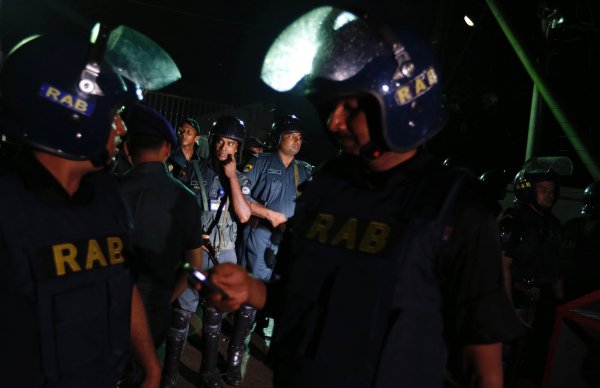