Ellen DeGeneres was unable to film her talk show on Wednesday, but the show must go on, and Miley Cyrus stepped in at the last minute to fill in.

DeGeneres wrote on Twitter, “The bad news is I’m sick & can’t tape my show today. The good news is @MileyCyrus dropped everything to host for me. Thanks, Miley!”

It’s rare that the host takes a sick day from The Ellen DeGeneres Show, though it did happen back in January 2014 when Unbreakable Kimmy Schmidt’s Ellie Kemper covered for DeGeneres, who had the flu.

Cyrus has made numerous appearances on the NBC talk show over the years, including last October when she performed “Hands of Love” with Linda Perry.

In a clip promoting the episode, Cyrus introduces herself to the studio audience as someone ready to fill DeGeneres’ shoes. “I know all of you came to see Ellen, so I’m gonna do my best to make you very happy. I’m dressed like her, I smell like her, just before I came out here I actually kissed a girl so, uh, thank you,” Cyrus jokes. “Thank you for staying. I’ll admit I’m a little bit nervous because I’ve never hosted a show with my clothes on before so this is so weird.”

Cyrus currently serves as a judge on The Voice on NBC has a starring role in Woody Allen’s upcoming Amazon series, Crisis in Six Scenes. 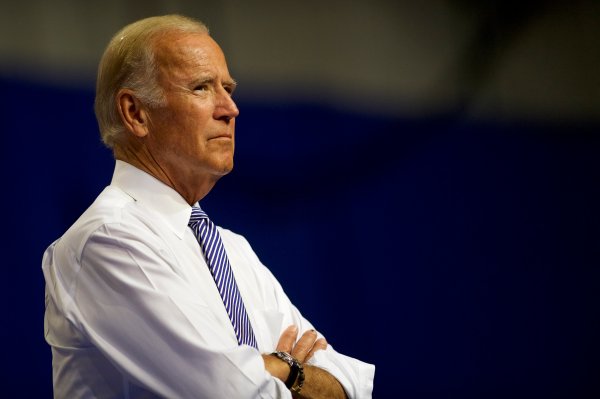 Joe Biden's Appearance on 'Law and Order: SVU' Is a Hit
Next Up: Editor's Pick