Wells Fargo’s Scandal Is a Harbinger of Doom

In the financial sector, scandal is the gift that keeps on giving. Publicly shamed by Senator Elizabeth Warren after his bank opened as many as 2 million unauthorized accounts to goose profits, Wells Fargo CEO John Stumpf, who had been reluctant to part with any of his own compensation following revelations of the scandal, has finally agreed to give up unvested equity worth about $41 million, and forgo his $2.8 million salary while the bank is being investigated. Warren called the act “a small step in the right direction, but nowhere near real accountability,” and said he should return every dime he’s made during the period where fraud was happening.

Wells itself is of course losing value, its market cap dropping by a tenth since the scandal began. And Fed chair Janet Yellen, who just a couple of days ago had been under pressure from Donald Trump about interest policy, had to withstand a Senate grilling over the safety of the U.S. financial system in the wake of the Wells news. “We will hold the largest organizations to exceptionally high standards,” Yellen testified before the House Financial Services committee when asked whether the Fed would break up Wells Fargo. She also told Congress that the Fed is considering raising capital requirements for big banks (even as the companies have already added quite a bit of capital in recent years) and said that regulators were considering an overhaul of the stress test system.

More capital is nothing but a good thing, though I’ve always been somewhat skeptical about the ability of stress tests to gauge the full range of financial disaster scenarios. In fact, as an interesting new paper from Brookings, co-written by (of all people) former Treasury Secretary and finance-friendly economist Larry Summers points out, the fall in market value of the banks themselves is becoming a risk, because even if they deleverage their own balance sheets, their decreasing value in the marketplace could make it harder for them to pony up enough equity in the event of a crisis. (This is yet another reason Yellen and the Fed are right to think about even higher capital requirements. Even a 5 or 6% cash cushion isn’t enough for a global financial institution with a falling market value to weather another financial storm.)

Of course, the irony is that the Wells case isn’t about anything as complicated as Tier 1 capital requirements. It’s about straight-up fraud — tellers were incentivized to make profits above all else. But why did the trouble come in the consumer division, as opposed to any of the more complicated areas of the business? That’s where the story becomes more interesting, illuminating a more fundamental problem in the business model of banking. Finance has moved away from its original model of supporting companies (and thus, economic growth), and now makes the majority of its money buying and selling existing assets, as well as issuing corporate and consumer debt.

As I wrote in my recent book, excerpted in this TIME cover story, the financial system — as envisioned by the father of modern capitalism, Adam Smith — was supposed to be a helpmeet to business. Until the 1980s, banks mainly took deposits and lent them out to new businesses, which then grew jobs and supported the economy. In the 1970s, for example, the majority of financial flows coming out of the largest U.S. financial institutions went into new business investment. Today, only 15% of it does. (Not incidentally, the number of new business startups per capita has fallen precipitously as a result over that time.) That shift was responsible for an enormous growth in profitability in the banking sector — over the last few years, finance has created around 4% of US jobs, but taken a quarter of all corporate profits.

However, since 2008, both Dodd-Frank and the macroeconomic climate have made it tougher for the largest financial institutions to make as much money trading. So, retail banking and consumer finance has become the new target profit center. (Witness even large investment banks like Goldman Sachs and Morgan Stanley trying to go into this area.) It’s no wonder that the latest banking scandal isn’t a London Whale-style trading debacle, but a consumer fraud. We can expect more of this, and probably in this very area of banking, in the future. It’s where companies are now desperately trying to make a profit. And it reflects how far banking has come from its original business model.

I’m certainly for clawbacks of cash from CEOs who weren’t watching the till, as well as higher capital requirements, and new ways of thinking about how banks hold risk. I think it would also help offset more financial scandal if some CEOs actually did jail time. But there’s an even deeper issue evident in the Wells scandal, along with the raft of other financial disasters we’ve seen over the last decade. Until we craft a financial system that is once again focused on its true economic function — funding new business, rather than issuing debt, creating asset bubbles, and focusing on boosting profit share at whatever cost — I fear that we can expect more of the bad behavior we’ve seen at Wells. 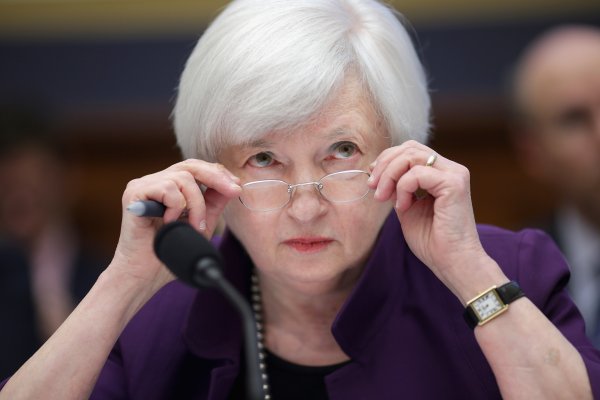 Janet Yellen Should Stand Up to Donald Trump
Next Up: Editor's Pick