Why We Should Close America's Overseas Military Bases

A Military guard patrols the deck of the USS Ponce where US Secretary of State Chuck Hagel was touring, on Dec. 6, 2013 in Manama, Bahrain.
Mark Wilson—Getty Images
Ideas
By John Glaser

Glaser is Associate Director of Foreign Policy Studies at the Cato Institute.

Despite our unorthodox presidential election, America’s overseas military bases are largely taken for granted in today’s foreign policy debates. The U.S. maintains a veritable empire of military bases throughout the world—about 800 of them in more than 70 countries. Many view our bases as a symbol of our status as the dominant world power. But America’s forward-deployed military posture incurs substantial costs and disadvantages, exposing the U.S. to vulnerabilities and unintended consequences.

Our overseas bases simply do not pay enough dividends when it comes to core national interests. Here are seven reasons why it’s time to close them.

1. They don’t protect the homeland from direct attack.

U.S. leaders often argue that bases are the centerpiece of a liberal, rules-based world order. They claim that bases in Europe protect European allies from Russia, bases in the Middle East ensure the free flow of oil and contain Iranian influence, and bases in Asia defend our Asian allies from a rising China and an unstable North Korea. But stationing 80,000 troops at 350 installations in Europe is not directly related to securing Americans’ physical safety. The same goes for the more than 154,000 active-duty personnel based throughout Asia. And the argument that maintaining a forward-deployed military posture in the Middle East protects the free flow of oil is supported by pitifully sparse empirical evidence.

If we brought our troops home, we wouldn’t be much more or less safe than we are now. That’s mostly because we are already the strongest nation economically and militarily by far and probably the most secure great power in history, isolated from other powerful states by two great oceans and protected with an arsenal of thousands of nuclear weapons. On top of that, the world is a safer place these days. Interstate conflict has declined dramatically in recent decades and may even be on a path to obsolescence for reasons that have little to do with all these military bases.

2. Their deterrence effect is overrated.

The deterrence value of bases is frequently exaggerated. Even during the Cold War, as Robert Johnson has argued, the Soviet threat was subject to “undue alarmism,” and “even without American forces deployed in Western Europe, a Soviet attack was extremely unlikely.” According to international relations scholar Robert Jervis, “The Soviet archives have yet to reveal any serious plans for unprovoked aggression against Western Europe, not to mention a first strike on the United States.”

Deterrence can also sometimes have the opposite of the intended effect. For example, many see the U.S. military presence in Europe as deterring Russian military aggression, but Russia’s interventions in places like Georgia and Ukraine derive more from Russian insecurities about the expansion of U.S.-led Western economic and military institutions than from signs of American weakness or insufficient military presence in Eastern Europe. Post-Cold War NATO expansion, in particular, is the source of profound anxiety and lingering resentment in Moscow that arguably makes things less stable, not more.

Another core argument is that the U.S.’s forward presence prevents arms races, particularly nuclear proliferation, by reassuring allies. The record on that score is mixed. While U.S. security guarantees to countries like Japan and South Korea have likely dissuaded them from developing nuclear weapons, those same guarantees can provoke nuclear proliferation in other regional actors, like North Korea. Prior to the recent nuclear deal, Iran built up its nuclear program in large part as a deterrent to threatening nearby U.S. bases. And allied countries, like Britain, France, and Israel, acquired nukes despite the protection of in-country or nearby U.S. bases.

4. They can encourage resentment.

Local resentment over the presence of foreign military bases can linger for generations, as was the case when in 1991 the Philippine Senate “assailed [the U.S. military presence] as a vestige of colonialism and an affront to Philippine sovereignty,” and President Corazon C. Aquino ordered full withdrawal. And this past June in Japan, 65,000 Okinawans protested in the streets against the U.S. presence there.

Sometimes such resentment can be extreme. According to Chicago University’s Robert Pape, “the principal cause of suicide terrorism is resistance to foreign occupation.” Indeed, the presence of U.S. military bases in Saudi Arabia was one of the most prominent grievances cited by al-Qaeda pre-9/11 in order to rally Muslims against America. And since the surge in U.S. military presence in the region post-9/11, terrorist attacks on troops and bases in the Middle East have dramatically increased.

5. They can cause the U.S. to support brutal dictatorships.

In Uzbekistan, the recently deceased dictator Islam Karimov was famous for massacres and widespread torture, yet nevertheless received U.S. backing in exchange for basing rights. During the Arab Spring in Bahrain, where the U.S. Navy’s Fifth Fleet is stationed, the regime cracked down on peaceful dissent with gross human rights violations. But Washington kept largely silent (and willing to continue sending money and arms to the regime) because the base is considered so geopolitically important.

6. They risk entangling us in unnecessary wars.

U.S. bases often cause officials to urge American intervention wherever conflict might break out. But this risks entangling us in foreign wars that are none of our business. If conflict breaks out over maritime or territorial disputes in the East and South China Sea, the U.S. may be obligated to intervene against China to fulfill its security guarantee to Taiwan, Japan, or the Philippines. Getting into a war with China over some uninhabited rocks of no strategic importance to us is not in our interests.

Before the nuclear deal with Iran, there was apparently a real risk Israel would preventively strike one of Iran’s nuclear facilities. Because of American promises to fight for Israel, U.S. bases in Bahrain would have been a priority target in Iranian retaliatory strikes.That would have brought us into another desperate quagmire in the Middle East, which is frankly the last thing we need.

7. Technology has largely made them obsolete.

Some argue that bases allow rapid military response. That’s certainly true to some extent. But modern military technology has significantly reduced the problems of travel times over long distances. According to a recent RAND Corporation report, “lighter ground forces can deploy by air from the United States almost as quickly as they can from within a region.” Long-range bombers can fly missions up to 9,000 miles, and after that they can be refueled in the air, reducing the need to have in-place forces abroad.

The bottom line is that troops can deploy to virtually any region fast enough to be based right here in America.

But even this misses the point. We shouldn’t be intervening militarily all over the world unless there is a clear and present danger to U.S. security. Despite the habitual threat inflation in our politics and punditry, the world is increasingly peaceful, and the U.S. is exceptionally insulated from foreign dangers. Our remarkable level of security simply doesn’t call for such an activist foreign policy. 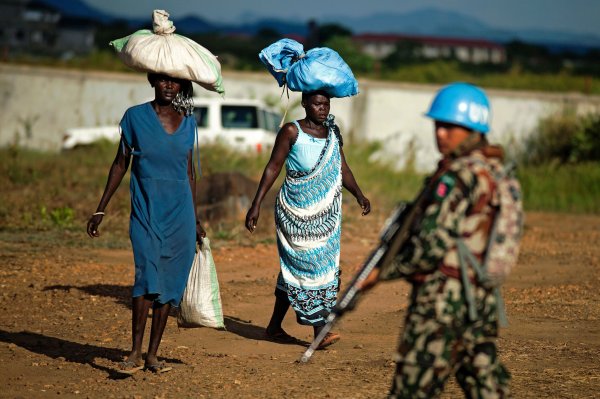 How to Ensure Lasting Peace in South Sudan
Next Up: Editor's Pick