A couple days after Donald Trump’s trip to Mexico City, his campaign posted a video on YouTube showing his arrival at Los Pinos, the official residence and office of Mexican President Enrique Peña Nieto.

The video shows Trump step from a gleaming white Mexican Air Force helicopter that transported him from the Mexico City airport on Aug. 31. “It was really good, thank you,” Trump can be heard saying on the video, when asked by a Mexican official about his trip.

The details of who paid for the helicopter trip, however, remain shrouded in mystery, raising concerns in the capitals of Mexico and the United States.

Campaign finance experts say U.S. election law likely prohibits the Mexican government from picking up the tab of Trump’s helicopter flight, under statutes that bar “any foreign national from contributing, donating or spending funds in connection with any federal, state, or local election in the United States, either directly or indirectly.” Mexican legislators, meanwhile, have fumed at the possibility that the Mexican people subsidized Trump’s August visit.

The Trump campaign’s August filing with the Federal Election Commission includes no listed reimbursement to the Mexican government for the use of the helicopter, nor any other associated costs of the trip. In response to questions from TIME, the office of Peña Nieto also declined any comment on the cost of the helicopter flight, and whether there was a reimbursement.

Trump’s campaign did not address a specific question about the helicopter expense but spokeswoman Hope Hicks said in a statement, “expenses for this trip weren’t due on this report and will appear on the next report.” If Trump was invoiced for the helicopter in September, he could wait to report it until next month.

“The trip to Mexico was clearly a campaign event,” said GOP election lawyer Charles Spies, “and it is impermissible for a foreign government to make contributions to a federal campaign, so the campaign would need to reimburse the Mexican government for the helicopter in able to avoid an impermissible in-kind contribution.”

Mexican opposition lawmakers, who were critical of the trip from the moment it was announced, condemned the government’s expenditure of funds on Trump. “Not a single Mexican liked Mr. Trump’s visit, and much less the idea that their taxes contributed to his visit in this campaign,” said Senator Gabriela Cuevas of the National Action Party. Senator Luis Humberto Fernandez, of the Party of the Democratic Revolution, told TIME that he requested that Peña Nieto’s government to detail the costs associated with the trip but has yet to hear back. “Ethically it is not correct or possible that the Mexican’s tax money goes to launch or relaunch [of] Mr. Trump’s campaign,” he said.

Paul Ryan, the deputy executive director of the Campaign Legal Center, a watchdog group, told TIME that any expense relating to a campaign event must be covered by the campaign. “Failure by the Trump campaign to reimburse Mexico for Mr. Trump’s Mexico trip would amount to the receipt of an illegal in-kind contribution from the state of Mexico,” he said.

Tony Herman, a former general counsel at the FEC, said there is a well-recognized exemption for Secret Service protection that campaigns don’t have to pay for. And while the helicopter may be claimed as a security requirement, taking it as in-kind would be “uncharted territory,” for the committee.

A Secret Service spokesperson referred questions to the campaign.

If Trump fails to reimburse the Mexican government for the trip, he could face an investigation by the FEC, which could level fines or even refer the case to the Department of Justice. But the six-member commission is notoriously deadlocked on partisan lines, making enforcement action unlikely. A campaign found to take illegal contributions is fined $5,000 under federal election law, while those knowingly accepting the payments can be fined the same amount and imprisoned for up to one year. 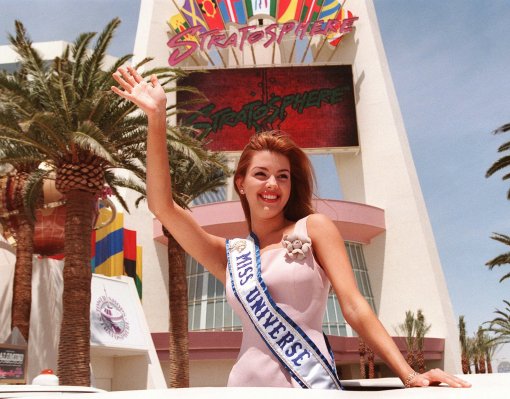 Who Is Alicia Machado? She Says Donald Trump Called Her 'Miss Piggy'
Next Up: Editor's Pick