Maybe you think virtual reality circa 2016 is a fad, a trumped up way of looking at otherwise ordinary games. Maybe you find it too visually crude and ergonomically strange—picture what someone playing pin the tail on the donkey would look like if their blindfold had a tether and weighed over a pound. Maybe feeling “present” in someone else’s imaginarium, with all its head-mounted headaches and bridal veil’s worth of cabling, isn’t enough to move your needle.

Sony’s PlayStation VR, due October 13, won’t change your mind if your opinion’s coalesced around the tech based on this spring’s dueling headsets from HTC and Oculus. You’re either dazzled or disinterested, inspired or unmoved. PlayStation VR brings no game-changing surprises to the table, makes no audiovisual zigs or interactive zags. It’s still the same low-fi, cable-spaghetti, eyes-in-a-box immersion we saw earlier this year, most likely to appeal to enthusiasts who already own a PlayStation 4 but haven’t yet sprung for a Rift or Vive.

But it’s also the product that hits closest to what feels like first-gen virtual reality’s sweet spot: affordability without meaningful compromise, ergonomic maturity and in a few instances riveting platform-exclusives. And at $399 (plus $59.99 if you don’t already have the requisite PlayStation 4 Camera), it’s yours for hundreds of dollars less than its fellow high-enders. Even if you don’t own a PlayStation, had for as little as $299, it’s still way cheaper than buying a Rift or Vive and cobbling together a sufficiently brawny PC, whose price tag taken with the headsets can easily spiral into four figures.

Pluck PlayStation VR from its oblong box and the first thing you’ll notice is that it feels solid in a way the floppier cranial moorings the Rift and Vive employ don’t. The PlayStation VR’s headpiece is effectively a crown of thick plastic inside which Sony’s laid a soft rubber-sheathed bumper of thick but pliable foam. By contrast with other headsets in the “just over a pound” range, it’s almost luxuriously comfortable, a welcome bit of indulgence for an experience that depends largely on how fast you can slip these headpieces on and get your visual field un-fuzzed.

Instead of the Rift or Vive’s cheap straps or velcro fasteners that can leave you blindly fumbling to adjust them, PlayStation VR distills adjustments to a pair of buttons—one up front and another at the rear. This lets you position your head in a second or two, while a dial along the back lets you ratchet the headset to a snugger fit. Even the slender connection cable’s been deftly managed, appearing along the headset’s side but reinforced to extend as if from the rear, so that it’s completely out of the way. It’s like “Formfitting for Dummies.”

That’s probably because Playstation VR is the lithely machined and beveled progeny of a multi-billion-dollar global firm’s decades of consumer electronics know-how. Design like this makes you understand why Steve Jobs said he wanted to turn Apple into the “Sony of the computer business” when he returned to the company he founded in 1998.

This is probably as good as first wave VR’s going to get as a fashion accessory, too. I’m only half-kidding. Contrasted with HTC and Oculus’s anodyne-black plastic, PlayStation VR looks like a proper pulp sci-fi visor, tiny parabolas of translucent plastic punctuating its space-shuttle-white frame, each glowing the PlayStation 4’s signature electric-cerulean blue. It looks properly futuristic, in other words.

That’s not mere stylistic license, either. Those luminous colors, the same as the light on the DualShock 4 controller or glowing ping pong orbs at the ends of Sony’s optional PlayStation Move wands, help the PlayStation Eye camera track your head’s twists and turns. The tracking’s not as infallible as HTC Vive’s benchmark infrared laser-sweeping lighthouse stations, occasionally betraying visual jitter when you’re using the wands as extensions of your hands in an experience, but it’s close.

Speaking of Move, if you don’t own the wands, they’ll set you back $49.99 a piece. Most games support the PlayStation 4’s de facto gamepad, but for any experience that offers two-fisted controls, the wands are so superior to gamepad interaction that they might as well be mandatory. Sony offered a limited-time $499.99 bundle for preorders that included the PlayStation Camera, two Move wands and a copy of its introductory experiential grab bag dubbed PlayStation VR Worlds, but it’s long since sold out.

Sony includes a pair of ear buds that connect to the inline remote that’s attached at roughly chest height to the headset cable, though in the end I opted for a personal pair of high-end, over-the-ear Sennheiser cans. The remote lets you power the headset on or off, fiddle the volume and mute a microphone that’s embedded in the visor (eliminating the jam you might otherwise experience trying to wriggle a separate headset with boom into the mix). There’s also a disc in the box that includes playable demos of 15 VR-specific games, so the try-before-you-buy angle’s well covered.

Hooking the headset to your PlayStation 4 involves connecting an intermediary HDMI cable management unit that supports 3D audio and lets the system output visuals to both the headset and TV. (Useful if, say, someone wants to see what you’re seeing, or play a multiplayer game with you.) And then you’ll want to give yourself about 6 feet wide by 10 feet long of space to play in, sitting 5 or 6 feet back from the camera. It’s similar to the Rift in this respect, focused more on sitting or standing experiences, and lacking the Vive’s larger, more ambulatory play area.

Power it up and you’re presented with a sprawling virtual version of the PlayStation 4’s default interface, which you then navigate using the gamepad just as you would on a television screen. We’ve seen this mode with the other headsets, of course, and here it’s analogous to sitting half a dozen feet from a selectable 117-inch to 226-inch ginormo-screen. Anything that outputs to the PlayStation 4 can be experienced in this mode, from Blu-ray or streaming video to non-VR PlayStation 4 games.

Of all the virtual reality headsets I’ve tried or reviewed to date, PlayStation VR’s visuals feel the clearest and most consistently focused. The 5.7-inch OLED screen inside the visor splits a 1920-by-1080 pixel image such that each eye sees 960-by-1080 pixels. That’s a bit less than the Rift or Vive, which gives each eye 1080-by-1200 pixels. But PlayStation VR has a higher sub-pixel resolution than Vive or Rift, which essentially means it’s rendering the reds, greens and blues more clearly.

In my tests, that translates as more consistently crisp (and if you’ll allow me to use the word just this once, immersive) visuals, though other first-gen virtual reality caveats still apply. Swivel your eyes to look at images along the visor’s edges, for instance, and the world goes fuzzy, forcing you to look straight-on at objects you want to study, say the words on a sign or piece of paper. Coupled with the fact that anything you’re observing more than a few feet out in a simulation loses focal fidelity, this stuff still distracts from the experience—a problem we’ll have to wait for eye-tracking and 2nd- or 3rd-generation virtual reality to sort out.

Another worry about this headset was that the PlayStation 4 wouldn’t be graphically powerful enough to banish motion sickness. Virtual reality requires brisk, consistent frame rates, and while I don’t have benchmarks, I can tell you that this is the first virtual reality headset I’ve been able to use for hours on end without my stomach doing flip-flops. That wasn’t the case with the Rift or Vive until I paired them with Nvidia’s 1080 GTX, a powerhouse card that’ll set you back as much as $800.

That leaves the experiences, of which Sony says around 30 should be available at launch (expanding to 50 by year’s end). I had access to a handful of these during the review period, but my favorites include Supermassive’s jolting Until Dawn: Rush of Blood, a wheeled glide over rickety rollercoaster trellises, through creepy caverns and ghoul-haunted houses. You’re glued to your seat, brandishing a pair of lordly firearms, taking shots at lunging enemies in macabre scenarios. So basically Duck Hunt meets Saw.

Another standout is Uber Entertainment’s Wayward Sky, a mixed perspective adventure-puzzler starring a pilot out to rescue her father from kidnappers in a sky fortress. You guide her through areas from fixed vantages, which is straightforward enough. But the game auto-switches to first-person views when you’re up against a puzzle, letting you directly manipulate its particulars, say a panel of misaligned pipes, with your virtual hands.

Best of all though, and I’m brazenly including everything I’ve yet tried in virtual reality here, is Drool’s Thumper, an ingenious rhythm game that’s Speed Racer meets Guitar Hero meets space beetles (not a game, but should be). You maneuver a glistening scarab down an undulating licorice-whip track as animations that wouldn’t be out of place in Pink Floyd’s The Wall play in the distance. You have to time your taps as squares of light whoosh pass, an insectile drummer skidding and grinding through turns or raising your beetle wings to graze rings. It’s playable without the headset and superlative even then, but trance-inducing with the headset blocking out all distraction.

Whether “first-gen virtual reality headset to beat” is a trigger-puller depends more than ever on circumstance. Some readers already have PlayStation 4s, others reasonably high-end PCs, either of which alter an equation that’s down to subjective math. The differences between these first-gen headsets are slight enough that your starting position probably matters more than my recommendation. But if you’re one of the 40 million-plus people already rocking a PlayStation 4 and are virtual-reality-curious, PlayStation VR makes the most sense.

In the decades ahead we’ll probably look back at these headsets and marvel at their crudeness (perhaps literally, from the vantage of luxurious ocular implants?). If you’re feeling persuaded, know that you’re still buying the tech equivalent of one of those briefcase-sized cellphones from the 1980s. That’s the nature of emerging technology though. The argument for PlayStation VR: it’s the friendliest, visually clearest, most affordable of the initial lot. 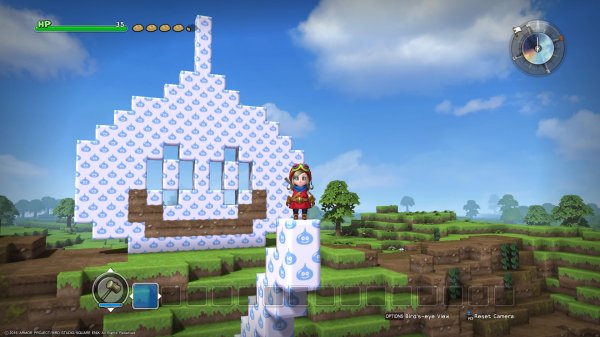 Review: 'Dragon Quest Builders' Is the Post-'Minecraft' Game You Have to Play
Next Up: Editor's Pick