A group of city council members in Barcelona wants to take down the famous statue of Christopher Columbus in the town center, arguing that it inappropriately celebrates the explorer’s colonial history.

The memorial of the Italian explorer, which stands 197 ft. tall, was built for the Barcelona Universal Exposition in 1888. It features a bronze statue of Columbus atop a column, with a base decorated with figures from Spanish history.

Three council members from the left-wing Popular Unity Candidacy party argue that the statue and the decorations at the base “glorify the conquest of America and its ‘museumification’ through historical interpretation,” The Guardian reports. They say a better alternative would be a memorial of “American resistance to imperialism, oppression and indigenous and African-American segregation,” and are submitting these proposals to the city council on Friday.

The same Barcelona council members are also calling for the city to stop celebrating a national Spanish holiday on Oct. 12 commemorating Columbus’s first arrival in the Americas. Columbus Day in the U.S. is celebrated on the second Monday in October, although some cities observe the national holiday as Indigenous Peoples Day instead. 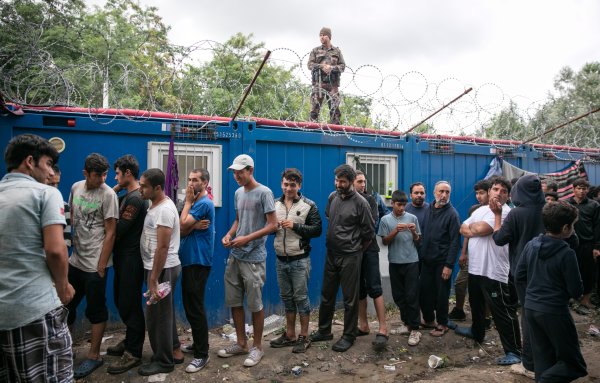 Hungary Has Created a Cruel System to Deter Migrants, Says Amnesty
Next Up: Editor's Pick