Please Understand Just How Harmful Donald Trump’s Wall Would Be

A U.S. flag put up by activists who oppose illegal immigration flies near the US-Mexico border fence near Campo, California, on Oct. 8, 2006.
David McNew—Getty Images
Ideas
By Teresa Puente
Puente teaches journalism at Cal State Long Beach and is a senior facilitator with The OpEd Project

As we near the final stretch of the election, it’s worth looking back at Donald Trump’s original, trademark policy proposal: “the wall.” Trump’s plan to build an “impenetrable, physical, tall, powerful, beautiful” wall could have the reverse impact of forcing people who live along the border to migrate to the U.S.

Rather than simplifying immigration policy to securing the border and deporting the undocumented, we should look at how building a wall could break the interdependency of the U.S. and Mexican economies.

The trade of U.S. goods and services with Mexico totaled an estimated $583.6 billion in 2015, according to the Office of the U.S. Trade Representative. Sealing off the border would affect the flow of Mexican shoppers who spend billions of dollars shopping in U.S. border states every year. And it would hurt Mexican towns that rely on U.S. tourism.

This summer my husband and I drove the length of the 2,000-mile U.S.-Mexico border. We started east of Brownsville, Texas, on Boca Chica Highway and followed the road to the beach where the Gulf of Mexico meets the Rio Grande. We took small roads and highways through Texas, New Mexico, Arizona and California, crossing into Mexico at a half dozen small border towns.

Along the way, I spoke with more than two dozen people on both sides of the border, and not one of them said we need to build a wall.

One can look at the border town of Boquillas del Carmen to see what happens when we cut the U.S. off from Mexico. The town, which you can reach by row boat from Big Bend National Park, was devastated economically when the border crossing was closed there after Sept. 11, 2001.

The town relied on tourism from park goers. Carmen Falcon, whose family owns a restaurant there, said they had to close down.

“The town was abandoned. It was very sad,” she said. “So many people left because they had to work.”

Where did they go?

The United States. Some of Falcon’s family members moved to Kansas to work in the meat packing industry. Others moved to Texas.

The border crossing opened again in 2013, and Falcon has reopened the family restaurant. People have returned to the dusty town of 185 residents. Residents told me they don’t want to live in the U.S. They want to earn a living in Mexico.

In Columbus-Palomas, where Pancho Villa fought in the last armed conflict between the U.S. and Mexico, there is today a 15-foot fence and extends as far as the eye can see. Driving 160 miles along Highway 9 in New Mexico you see Border Patrol agents literally every few miles.

There are about 700 miles of border wall or fence along the U.S.-Mexico border. Much of the rest of the border sits against land barriers including canyon walls 1,500 feet tall like those of the Santa Elena Canyon across from Big Bend National Park.

In Terlingua, Texas, Pam Ware, spoke of how her Irish relatives migrated to Texas in the 1700s with a land grant from the King of Spain. Some of her family members later intermarried with the Comanche. She said that building a bigger wall would ruin the natural beauty of the area and also destroy tourism.

“(Trump) talks from pure ignorance,” Ware said. “He’s never lived on the border. It’s a sound bite for him. We don’t need a fence. We’ve got a desert. We have cliffs and very formidable terrain.”

She added that there are only three paved roads in and out of her area, and they are also covered by Border Patrol.

In the desert near Tucson, Ariz., a group of artists who are part of the Good Samaritans volunteer group go out once a week to plant crosses in the desert for migrants who have died. In 115-degree weather, using a GPS system and data from the local coroner, they pinpoint the exact point where the death occurred.

Artist Alvaro Enciso, makes the crosses from wood and found objects in the desert. He is originally an immigrant from Colombia, came to the U.S. in the 1960s and served in the U.S. Army in Vietnam.

With the help of fellow artists, he has planted more than 350 crosses in the desert over the last three years.

“This is where the American Dream died for someone,” he said standing next to a newly planted cross.

In the Arizona desert, temperatures soar to 110 and 120 degrees. The Samaritans leave water for the migrants who take this dangerous journey. Migrants do make it through. But they also have to walk miles to evade border checkpoints on every road coming out of the border.

Trump describes Mexicans as flooding across the border. But a Pew Research Center study found more Mexicans are leaving the U.S. than coming into the U.S.

During our trip, we had to show identification at multiple checkpoints in every state, often as far 50 miles from the border. On one occasion, our car was searched by Border Patrol near Marfa, Texas.

While driving down an off-road trail outside Calexico we got stuck in the desert. Border Patrol agents helped pull us out. They said they normally rescue migrants from the sweltering heat. The number of deaths went from 70 to a few a year because the U.S. has increased the number of Border Patrols agents, they told us.

Trump’s “wall” ignores the geography of the border and the reality of how Mexico and the U.S. are connected economically and how building more barriers will create cultural divisions. Trump also ignores the fact that the Obama Administration has deported around 2.5 million undocumented immigrants, a record for any president.

We don’t need a bigger, better wall as Trump advocates. We need policies that strengthen both our economies and that don’t demonize our neighbors. 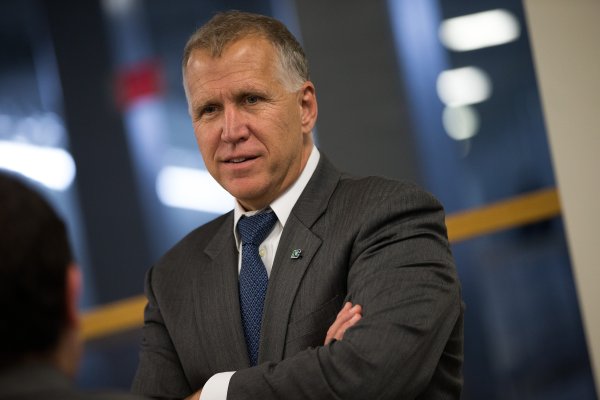 We Must Compensate Victims of Government-Run Eugenics Programs
Next Up: Editor's Pick