Don't Break Up With That Donald Trump Supporter

My friend liked her. They met on a dating app. They had gone on a couple dates and laughed a lot, especially when she made fun of him. They stayed in touch in health and in sickness (nothing remotely serious) over the course of a few weeks. They were messaging to plan a third date when she revealed: She might vote for Donald.

He, a Hillary backer even while Bernie rallied, told me he’d stop seeing her. That was it.

Read more: Break Up With That Donald Trump Supporter

In this time of Trump, who polls poorly with millennials (a recent Pew survey put the cohort’s support of Republicans at 29%), and Tinder, which is popular among them, my bet is these kinds of surprises have happened more often than usual. Millennials can, to an extent, expect their stranger-dates to broadly agree with them politically, at least enough to support Clinton. So when their dates don’t, they’re often baffled. They might freak out on someone whose company they enjoy. They might, as one campaign had boasted, act on the belief: Vote Trump, get dumped. They might even brag to their friends about it, with the subtext being, I’m a noble person.

And yet they’re in at least one way worse Americans than Trump supporters who would continue to date.

This will probably sound like the gross kind of earnestness marinated in righteousness. But the reason should be obvious to anyone who considers themselves a firm believer in American principles, especially for progressives—who pride themselves on their tolerance, who believe in a plurality of beliefs harmoniously coexisting in one land, who feel that Americans know each other less than they should and who gripe about modern governmental gridlock, an unwillingness of a (Republican-led) Congress to talk to each other and find common ground.

You changed the way you treated someone—who you liked—simply because they disagree with you. You personified intolerance. You committed dialogic infanticide. You decided there’s nothing more to learn about people at least ostensibly on the other side—aside from their selection in a blunt binary (even though researchers have found all types of partisans tend to exaggerate their differences). You spurned the power of a conversation, something proven to change even entrenched people’s minds. You failed your own beliefs by being unwilling to develop them. As well as unwilling to give your logic the chance to, for once, convince someone not already nodding in agreement. You reinforced the common conviction—no matter the side—that the opposition is stubborn.

My friend’s response to all that? “I’m so down to be a bigot.”

Another friend who joined the conversation said that my argument essentially makes “everyone a bigot.” Even those who “don’t like white supremacists.”

But that’s not true. First, disliking someone’s beliefs (or disagreeing with them) isn’t itself bigotry—changing how you treat them is. If you want to defend disagreement, don’t break up with your Trump Tinder-date—or boyfriend or girlfriend, or spouse you’ve loved for two decades.

Also, saying everyone does it is never a defense. It actually proves the wide scope of the problem. (Nobody sees a bunch of people on fire, shrugs and decides, “Everybody’s on fire—the definition of fire is too broad.”) The fact that this is a common reaction shows that bigotry—with all its connotations—is far more widespread than we allow ourselves to see. And a lot more people are more bigoted than they believe. In a Reddit post from a year ago, before Donald Trump said many of the quotes that progressives point to while arguing against him, a question was posed on the Reddit forum Ask Women: “Is being a Trump supporter a dealbreaker?” The most popular response by far was simply, “Yes.” The third-most popular response read, in effect, Yes. End of conversation. In a Plenty of Fish survey this year, two out of three women said they would never date a Trump voter. While nobody followed up any of those responses with the question “Do you consider that bigotry?”, I’d suspect almost nobody who replied would, even though a high rate would likely say bigotry was the reason to dump a Trump supporter.

Even if you believe that being a Trump backer proves that the person holding your hand is a “soft misogynist,” that wouldn’t absolve you from the need to keep investigating, from trying to understand, from remaining open. Ending things is lazy and defeatist. (There will be few better chances to explain to someone who you wish they change how they should change. That repeatedly talking over a woman—especially when it’s her turn to speak—is in fact misogyny, and a habit your date should become aware of in themselves. The first debate was a perfect example. There will be few better indicators of if they’re worthy of future dates than whether they’re willing to contemplate that.) Perhaps they have an interesting argument about a new path to social betterment for all genders that goes through Trump; just because you haven’t heard it doesn’t mean it doesn’t exist; just because you do (or don’t) hear it doesn’t mean that the person saying it believes their logic is infallible. Give them the opportunity to explain and to learn.

Besides, there are not implausible arguments for Hillary Clinton being a soft nationalist. For one, she has promoted a Saudi coalition that has killed thousands of Yemeni civilians and that recently attacked a Doctors Without Borders hospital. That progressives may be unaware of their less sharply rendered adverse beliefs seems like it would be compelling dinner conversation. Or maybe a Trump voter’s concerns come from the fact that Clinton recently named a wide swath of America “irredeemable”—which, in its lack of faith in her neighbors’ abilities to change, reveals the very prejudged hate her supporters say they’re fighting against. Though even if a Clinton supporter acknowledges those points, just as with anyone, there are many reasons to vote.

If they are unwilling to talk after being presented with facts and an actual effort to persuade them, then, sure, break it off. Nobody is more insufferable than who thinks their beliefs are flawless—except maybe for someone who feels that about their muscle tone. End it and call them a bigot and detail for them why—and then, all else equal, ask them how they are the next time you see them, talk with them, give you both a chance to grow.

My friend, a Hillary supporter, enjoyed the company of a Trump supporter—even if he didn’t know it at the time. You should’ve seen him after the first date. It’s possible. Don’t tolerate bigotry—especially not in yourself. Don’t break my heart. 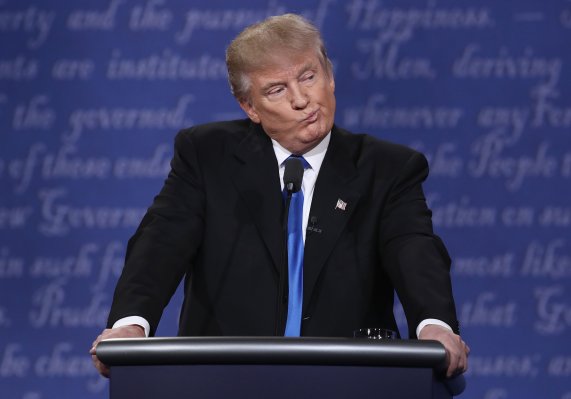