Donald Trump walked off the stage of the first presidential debate looking battered, but alive. He did much better than the average amateur might do, thrown into the glare of the world’s spotlight. Trump put his best case forward at the start of the night. Why give any career politician another chance — given the state of things?

After a dizzy whirl through 90 minutes, he staggered back to that potentially winning theme at the end. But was he limping, and was there blood dripping from a mortal wound?

Trump did an amazing thing: He didn’t protest when Hillary Clinton theorized that he paid no federal income tax. In fact, he seemed to agree with her. “That makes me smart,” he interjected.

Smart as a businessman, maybe. As a politician?

Trump was given a second chance soon afterward to brag about his titanic tax bill — but again, he seemed to agree that he paid zero. If he had paid taxes, they “would’ve been squandered,” he said. Which sounds like he didn’t pay any.

It’s safe to say that no one has run for President before on a platform of earning a huge income and dodging the tax bill. After the debate, reporters tried to pin Trump down on the tax issue. Once again, he faced a golden opportunity to talk about the millions he paid to keep up his fair share.

Instead, Trump spoke vaguely of having paid “taxes,” without ever defining the type or the amount — when everyone knows there are sales taxes, property taxes, Social Security and Medicare taxes — indeed, all sorts of taxes that don’t answer the question of whether you’ve paid federal income taxes.

When a man won’t say that he paid federal income tax, there is a real possibility that he didn’t pay any. And this could put Trump in a very tricky spot. The federal tax code is full of credits and loopholes, which overwhelmingly benefit people with very low and very high incomes.

On the low side, more than 40% of households earn too little to pay federal income tax. Mitt Romney had these folks in mind when he referred to the “47%” in his failed 2012 presidential campaign.

At the other end of the spectrum are very wealthy people who are able to exploit loopholes to avoid paying taxes. Some of these folks might agree with Trump that it is “smart” to hang onto money that would be “squandered” on stuff like the Army, clean water, air-traffic control, the border patrol, National Parks and the war on cancer.

In between the low and high ends, there are millions of people who pay a significant share of their earnings in income taxes. Voters with $60,000 in income, or $80,000, or $120,000. They may have a hard time understanding why they should pay more federal income tax than a man who brags about earning more than $650 million. Their votes are likely to decide the election.

Several things could happen next. Trump could try to patch his bleeding wound by claiming to have paid significant federal income tax. But this will be increasingly difficult as long as he keeps his tax returns under wraps. Who is going to believe him? Only his true believers — not the swing voters.

Or Trump could be forced into making his tax returns public. Maybe there is nothing damaging in them. But he certainly isn’t acting that way. Or Trump could gut it out along the line he struck on Monday. Keep telling hard-working, taxpaying Americans that he deserves their vote because he is smarter than they are. 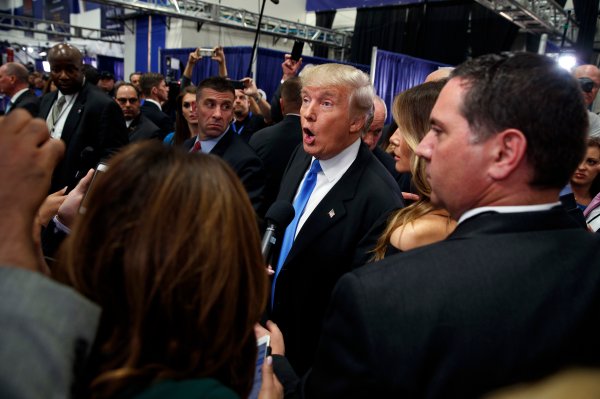 Presidential Debate Spin Room: Where The Real Fun Begins
Next Up: Editor's Pick