This Group of Undecided Voters Watched the Debate. They Think Hillary Clinton Won.

The group of undecided voters gathered in Philadelphia’s National Constitution Center really wanted Donald Trump to convince them tonight, to win them over and prove he can offer detailed solutions to the problems he points out. But he didn’t.

“I was really hoping to see a different Donald Trump tonight,” a blonde woman assembled as part of pollster Frank Luntz’s focus group of undecided voters lamented after the conclusion of the first presidential debate.

“I wanted him to come out in this, but she beat him,” said another.

The group had gathered hours earlier to discuss their views on the state of the race and why today, just 42 days out from the election, they still don’t know who they plan on voting for.

Luntz began the evening by asking the 27 voters to yell out which candidate they’re leaning towards supporting. Sitting on raised platforms surrounded by paintings of Ronald Reagan and John F. Kennedy and images of James Madison and Alexander Hamilton, the loudest shout came from the front row: “I hate them all!”

Luntz then asked the group if they feel like they’re getting the candidates they deserve. After a resounding “No,” Luntz protested they voted for Trump and Clinton; they won the primaries. “I didn’t!” multiple people yelled back.

These undecided voters were angry. Every single one raised their hands to say they’re disappointed in this election. “I have voted in every election since I was 18 years old. This is the first one I’m going to sit out,” said a Republican in the front row. He was one of ten in the group who initially said if nothing major changed their mind, they would not vote for president in November. (That number dropped to six after the debate.)

During the debate between two candidates that one voter framed as the choice between “a heart attack and a stroke,” the voters largely agreed that they were hoping to see substance from both candidates, especially from Trump, who they felt had more to prove.

“Him just not saying something outrageous isn’t policy,” one man said. “I want to know if he knows what he’s talking about,” echoed an African American woman.

But once the debate started, Trump did not deliver.

Each voter had a dial in their hand that they could turn to register favorable or unfavorable opinions in real time. They were grouped into three trend lines: those that lean towards Trump, truly undecided, and those who lean towards Clinton. This data showed all three categories ranking Trump extremely low when he got caught on the defensive. When moderator Lester Holt asked Trump why he hasn’t released his tax returns, even the voters leaning towards Trump rated Trump’s response in the 30s (50 is neutral). That same group went up to 70 during Clinton’s response, when she said, “There must be something that he’s hiding.”

When Trump was caught struggling to defend his previous positions on the Iraq War, claiming that he never supported it, Trump leaners and undecided dipped into the 30s, and Clinton leaners went into the 20s.

And Trump went even lower when he defended his temperament, saying it is his “strongest asset” and better than Clinton’s. At that point, Trump leaners sank to the high 20s, undecided to low 20s, and Clinton leaners to the high teens.

By comparison, when Clinton was on her back foot talking about her email scandal, undecided voters dropped to the mid-30s and Trump leaners to the 40s.

“She at least went ahead and takes responsibility for doing something wrong, while he just continues to deny any wrongdoing,” one viewer said after the debate of why he felt Clinton’s response to the email scandal was less bad than Trump’s tax return exchange.

Clinton struggled at points too; the voters judged her harshly when she attempted to attack Trump. When she quipped that Trump “just joined the debate by saying more crazy things,” the undecided line fell to 30. Whereas when Trump tried a similar personal attack against Clinton later in the debate, saying, “When you try to act holier than thou, it really doesn’t work,” the undecided line was up in the 60s.

Clinton’s best moments came discussing criminal justice reform. When Trump called for “law and order,” the voters remained about neutral. But when Clinton responded and said, “We can’t just say law and order, we have to come up with a plan,” numbers soared as she outlined her specific policy proposals. Undecided went up into the 70s, Trump leaners went up to the 60s, and Clinton leaners were all the way up in the 90s at her highest score of the night.

On the other hand, the voters responded positively when Trump called attention to problems in the nation and the issues with entrenched career politicians. When he said that President Obama and Clinton’s policies led to the rise of ISIS, undecided voters shot up to the 70s. When he talked about bringing his business sense to running the country, the lines also went up.

What never worked? When the candidates talked over each other or over the moderator. Voters almost always reacted negatively to interruptions and personal barbs between Trump and Clinton or in the instances when Trump talked over Holt.

These results show both sides of what the undecided voters want. They liked to see Trump exposing problems in the system, but they appreciated Clinton’s focus on detailed solutions. And they eschew extreme partisanship and bickering.

“I like competency and a track record of success,” one voter said after the debate. “And you didn’t get it?” Luntz asked. The voter sighed in exasperation: “Not in one person.”

After the debate, 16 viewers voted that Clinton had won, including the man who had the beginning of the night had identified himself as the most pro-Trump in the room. (“He definitely didn’t help himself,” he said of Trump afterwards.) Only six people said Trump had won.

“If he was a student in my middle school classroom, I would have told him to finish answering the question you were being asked, and then shut your mouth,” a woman said.

In the end, the voters felt it was Trump’s failure more than Clinton’s success that swayed them tonight. But they still aren’t satisfied: “The problem is Hillary Clinton was much better prepared … But I didn’t necessarily like the answers that she gave,” one man said.

Almost all of them said they would be watching the next two debates. 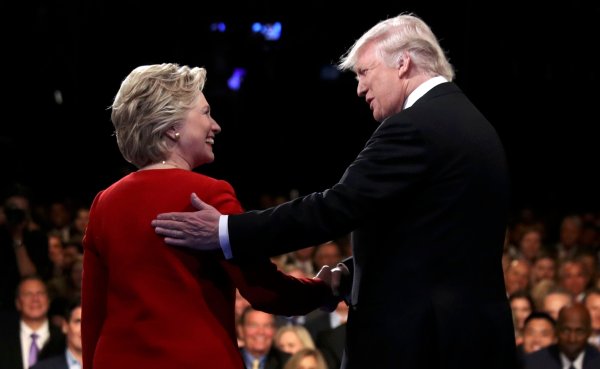 The Presidential Debate Was a Battle of the Sexes
Next Up: Editor's Pick