The First Presidential Debate That Needed a Second Screen

It’s odd, in retrospect, that there were so many vital-seeming questions about the role of the moderator in the run-up to Monday night’s Presidential debate.

It’s strange not merely because NBC’s Lester Holt did such a robust job of pushing back against Donald Trump in particular—in a way that few expected he might, given the general mood of “objectivity” as an enemy to “fact-checking.”

But it also became apparent over the course of the debate that Hillary Clinton had no expectation that issues of fact would be resolved during the debate—and had prepared for it rhetorically by baking signals to fact-checkers online and calls to visit her website right into her message. It was, perhaps, the first presidential debate in which a participant planned for the second-screen experience.

Trump’s particular relationship with objective facts has been a news topic of late, particularly in the aftermath of a town hall meeting, hosted by Holt’s fellow NBC anchor Matt Lauer, in which his claims that he had been opposed to the Iraq War before it began in 2003. Asking about the Iraq War again, Holt took the time to do what Lauer didn’t, noting in response to Trump’s claim of longtime opposition that “the record shows otherwise.”

Holt seemed, in moments during which he was challenged on the premises of his questions, like the quintessential moderator, armed with enough facts to bulletproof what he asked. In other noteworthy moments, he pushed back on Trump’s claim to have stopped pushing the issue of Barack Obama’s birth after 2011, and attempted to do so on Trump’s claim he did not actually say Hillary Clinton had a presidential “look.” (In the latter case, Trump cut him off, asking, “Did you ask me a question?”)

But for all his engagement in moments when questions were being asked, Holt also absented himself for long periods, allowing Trump and Clinton to battle things out. And Clinton, who might very easily have lost yet more time arguing over basic premises, used “fact-checkers” as a sort of signal to viewers that she was going to move forward, as when she dispatched them to look into Trump’s claim about the Iraq War (“I hope the fact-checkers are turning up the volume and really working hard”). Elsewhere, she urged Trump sarcastically to “join the debate by saying more crazy things” and urged viewers to visit her website to get real-time fact-checks. “I kind of assumed there would be a lot of these charges and claims,” she said, before urging people to log on. “Facts!” Trump cut in.

What is a fact is, more than ever in this presidential election cycle, up for debate, and Holt, once his questions were asked, tended to leave the candidates to each other. (Toward the question of how a moderator should be: Holt seemed to strike an exemplary balance, checking his own facts but allowing free-form discussion to go down its own odd avenues.) Clinton’s tactic, urging the media to generate supplemental materials and urging the viewers to seek them out, was, perhaps, a signal of quite how fractured our electorate is—after all, what voter who isn’t predisposed to Clinton would seek out such “fact-checking”? And yet it seemed like a way to cut through a volume of on-air chatter that was at times almost overwhelming. Clinton was effectively able to defer a debate about the meaning of facts towards the media and the internet, for having to do so on stage might have taken up all of her time.

Trump’s own way of dealing with the clutter tended towards shouting over Clinton and even over Holt. He presented himself as a meaningful challenge to the moderator not merely in substance—that he was prepared to call into question the sort of agreed-upon facts that generally form the beginnings of journalistic inquiry—but also in style.

Holt’s greatest credit may be that he made it to the end of the debate as stolidly unmoving as he was in its first minute, willing to be both a timekeeper and an interlocutor who was surprisingly hard to shake. But what happens on the second screen is surely as important for Trump as it is for Clinton. “Everyone in mainstream’s going to say that’s not true,” said Trump of his claim that Clinton had pushed the “birther” claim. “It’s true.” CNN had former Clinton campaign manager Patti Solis Doyle on deck after the debate to push back, but that’s mainstream; only the days and weeks ahead will tell us how Trump supporters interpret the facts as their candidate sees them. 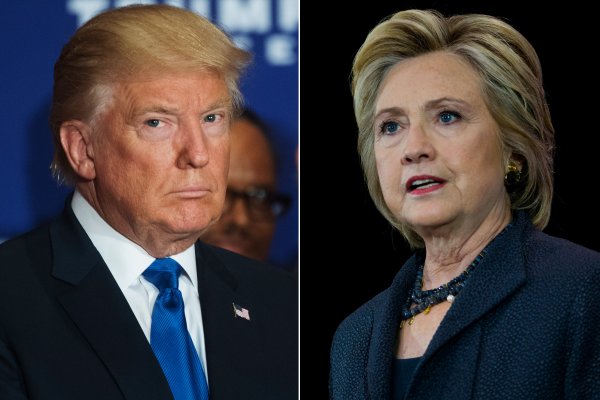 Vote Now: Who Won the First Clinton-Trump Debate?
Next Up: Editor's Pick