Here's Why the Audience at the Presidential Debate Clapped

The audience at the first presidential debate between Hillary Clinton and Donald Trump broke with protocol and tradition, repeatedly applauding and cheering both nominees.

While primary debates organized by cable networks are often raucous affairs, the general election debates are supposed to be more staid affairs.

Frank Fahrenkopf Jr. even took to the stage shortly before 9 p.m. to remind the crowd to stay quiet and collected during the 90-minute debate.

Here’s when they clapped.

During an exchange over his unreleased tax returns, Trump issued a retort to Clinton about her State Department emails to the first applause of the night.

“I will release my tax returns, against my lawyers wishes, when she releases her 33,000 emails that have been deleted,” he said.

But they also clapped moments later when Clinton responded: “And maybe because you haven’t paid any federal income tax for a lot of years.”

The audience also reacted favorably to Clinton’s response to a Trump quip about her short sick-leave from the campaign earlier in the month.

“I think Donald just criticized me for this debate,” she said. “And yes, I did. And you know what else I prepared for? I prepared to be president.”

And they applauded when Clinton responded to a Trump dig at her stamina.

“Well, as soon as he travels to 112 countries and negotiates a peace deal, a cease-fire, a release of dissidents, an opening of new opportunities in nations around the world, or even spends 11 hours testifying in front of a congressional committee, he can talk to me about stamina,” she said.

The candidates traded applause lines in the final minutes of the debate, including one moment where Trump launched into Clinton over her temperament .

“I don’t know who you were talking to, Secretary Clinton, but you were totally out of control,” Trump said. “There’s a person with a temperament who’s got a problem.”

Even Holt got some applause for this line: “We are at the final question.” 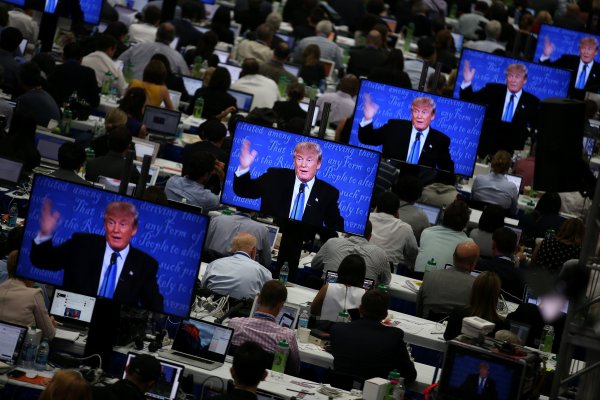 The First Presidential Debate That Needed a Second Screen
Next Up: Editor's Pick