Hillary Clinton and Donald Trump Face Off at First Debate

They got the same question, but the presidential candidates’ responses during Monday’s opening moments of the first debate showed the choices facing Americans for their new leader.

Hillary Clinton began with a clearly honed message to voters of all stripes: grandmothers, rank-and-file workers who think the system is stacked against them and middle-income families. It was a message of inclusion, a riff on her campaign pitch that Americans are all in this together.

Trump began his by blaming Mexico, China and immigrants. “We have to stop our jobs from being stolen from us,” he said.

The first clash offered a preview of a pair of candidates who seemed not just to disagree, but to be talking past each other with different realities. The pique between the two seemed likely to break into open conflict before long.

Clinton derided Trump’s economic ideas. “It would be the biggest tax cuts for the top percents of people in this country that we’ve ever had,” Clinton responded, trying out one of her rehearsed one-liners. “I call it trumped-up trickle-down.”

Trump, when pressed on how he would keep jobs in the United States, promised a massive tax on importing goods. “We have to stop them from leaving,” the New York businessman said.

Her dogged preparation paid off. The former Secretary of State, known for her precision, even timed her rehearsals to mirror her body clock.

There were plenty of expectations to meet heading into Monday night’s debate in Hempstead, N.Y., the first time the two major parties’ nominees were set to debate. Clinton is a known figure, while Trump is so unpredictable that he even skipped one debate during his Republican primary. Clinton aides prepared for multiple versions of Trump: the canny media manipulator, the billionaire business executive, the staid leader who could pull it together when he had to do so, or the braggart who can’t help himself.

Despite the candidates’ record unpopularity, the goal was never to make them more likable. Instead, they were looking to disqualify the other during a 90-minute face-off that was expected to draw a Super Bowl-size audience, and perhaps convince voters on the bubble that they aren’t as bad as they are seen.

Clinton arrived at the debate site prepared and ready to pounce. So eager, in fact, she left her house in Westchester, N.Y., around 1 p.m. to make the drive out to Long Island. A master of facts — if not always framing — Clinton is a tested debater who more often than not has bested her rivals. During her 2008 primary against Barack Obama, she outmaneuvered him through their series of clashes and only seldom did she stumble. It was much the same in negotiations as Secretary of State, and her debates against 2016 primary rival Bernie Sanders were often seen as Clinton picking apart policy with nuance and substance while Sanders reverted to his familiar diatribes against the ultra-rich and elitists.

And there is, perhaps, the most valuable lesson Clinton can draw from her primary this time. Like Sanders, Trump has a few familiar themes he likes to hammer and often skates past the substance of the question. He is most comfortable repeating a slogan he prints on for-sale campaign caps: “Make America Great Again.” (Clinton’s team had its own swag. Aides were wearing “Hillary for America War Room” T-shirts as they prepared to fact-check Trump in real time across social-media platforms and in reporters’ inboxes.)

Read More: Why the Timing Is Perfect for This Year’s First Presidential Debate

Trump arrived at this moment having blustered and bullied his way through a crowded field of rivals. He summarily dismissed questions rooted in policy and assured his supporters — more than 13 million people voted for him during the primaries — that he alone held the answers they demanded. He offered to swooning crowds that he would build a wall along the U.S.-Mexican border and that the Mexicans would pay for it. He promised a trade war with China, which most economists predict would be a disaster. And, without evidence or plans, he assured struggling workers that their factories would soon be firing up production again. He’s been narrowing the race with Clinton in key states, although she still has an advertising and on-the-ground advantage.

Trump allies bragged that he didn’t do a practice debate. “He’s been through — what? — 14 seasons of season finales,” RNC Chairman Reince Priebus told CNN before he headed out to Hofstra University, a familiar stop for this every-four-years debate tour. “He will be prepared.” Trump didn’t have someone standing in to play the role of Clinton during mock sessions, many aides said, and he wasn’t all that interested in the pacing of a one-on-one debate unlike anything he’s seen before. Worth remembering: it is one thing to host an hour of reality TV and it’s quite another to convince the country that he’s ready to lead it.

Also, Trump is a master of misdirection; insisting he didn’t prepare might be just a head fake. Trump is a showman of the first order. The question is whether that will be enough to sustain this 90-minute marathon against someone who was once celebrated as one of the best lawyers in America, has proved her mettle in these settings and is ready for whichever version of Trump decides to show himself to a nation looking for its next leader. 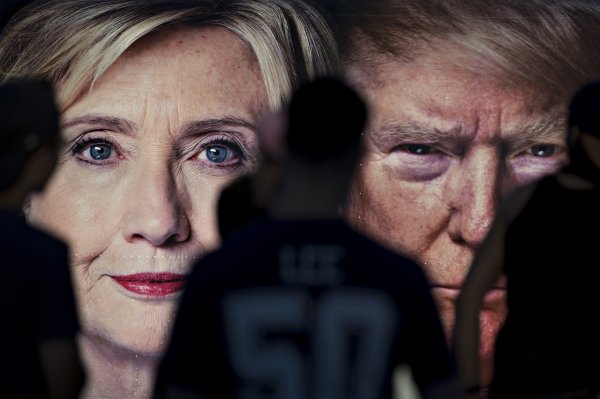 Watch Live: The Presidential Debate Between Hillary Clinton and Donald Trump
Next Up: Editor's Pick