The world of streaming services is a very hospitable place for creators with something they want to say and an urgent need to say it in their own way. From Netflix’s Orange is the New Black and BoJack Horseman to Amazon’s One Mississippi and Transparent to Hulu’s Casual, the sophistication with which artists transmit their raw ideas, unburdened by ideas of what is or is not conventional TV, has given us some of this year’s most exhilarating moments.

Sometimes, though, you wish a network executive were there to give detailed notes—including, perhaps, the note that not every artist is meant to work in TV. Woody Allen’s Crisis in Six Scenes, debuting Friday on Amazon, reveals America’s most prolific filmmaker has little idea or interest in what makes TV special. That itself is hardly news: Allen himself has said he’s “regretted every second since I said OK” to Amazon. But the ways in which Crisis in Six Scenes fails are instructive. TV may be on its way to supplanting cinema as America’s dominant art form—and may indeed have done so already—but it’s not the same. And importing a movie director at premium price isn’t enough to make a show.

Crisis in Six Scenes focuses on Allen’s Sidney Muntzinger and his wife Kay (Elaine May, in her first credited acting appearance since Allen’s 2000 film Small Time Crooks). The pair, respectively a novelist and a marriage counselor, are puttering through the 1960s just fine when their lives are upended by the uninvited arrival of hippie Lenny (Miley Cyrus). She makes as much of an impression as a timeworn assemblage of clichés really can, which is to say: Not much. Lenny—whose presence could, as in novels like Rabbit Redux or American Pastoral, substantially shake their lives up—is contented merely with spouting buzzwords. Cyrus is good, but lacks the warmth and humanity that usually come naturally to her as an actress: I’m not sure which young performer could sell the line “Somebody learned their Frantz Fanon very well,” but it’s not her. As for her confession that she joined the struggle by having sex with “a Jew and a black,” the less said the better.

Her presence sparks several of the sketches that form the show’s disjointed, rambling structure. To wit: Lenny recommends Mao’s “Little Red Book” to Kay’s book group, setting off an endless conversation that compares foot-binding to when you buy too-tight shoes at Bergdorf. By the time one unenlightened book-club member reveals she thinks Sitting Bull was an actual bull who sat down on George Custer, one wonders not merely how we got here—which is inexplicable enough—but who, exactly, Allen thinks he’s lampooning. Sid and Kay are ineffectual limousine-liberals toward whom Allen (and, in her performance, May) show no affection in particular. And for all its signifiers of American upheaval in the 1960s—the Muntzingers watch Vietnam War coverage on the news, Cyrus quotes all the radical-chic philosophers—the show has no philosophy, no ideas. As a statement about the disruptive politics of the 1960s, it’s a shrug, one that harkens back to better days even in the far more distant past. The most telling moment comes when Kay quotes “Chairman Mao”: “Death certain, life unpredictable.” Responds Sid: “She got that from Charlie Chan.” Why engage when you can deflect, and in so doing pointedly reveal your lack of interest in the subject matter?

Even at his cinematic worst (I’d place 2014’s period romance Magic in the Moonlight at or close to Allen’s nadir), Allen isn’t quite so unfocused. His points may be muddled or uninteresting, but they’re still points. This too-long drama ends and begins with a domestic bliss that’s both bucolic and deeply uninteresting—with Allen feeling, if anything, emboldened as a writer who could be “the next Salinger”—and why not? The status quo is powerful, and so too is Allen’s evident confidence. Both far outweigh the impact of a doltish idealist, purposefully written to seem not just naive but programmed with radical propaganda.

It’s as worthwhile as ever to mention the debate over whether or not to support the artist at all, given the troubling, ongoing allegations of minor sexual assault against him. Anecdotally, this debate seems to grow far more noisy when there’s an Allen property out there that people want to see—most recently during the Oscar campaign for Blue Jasmine in early 2014, or amidst the warm reception to Allen’s Cannes feature Café Society.

If only Amazon—for many reasons, among them the work itself—had been quite so discerning. The number of artists with meaningful things to say had gotten a fraction of the money Allen presumably had to work with. Instead, a name certain to get curious clicks was given free rein. And Allen, trading off that name, tossed off a poorly-paced, dated statement that the world is fine and would be finer if he could be left in peace. Perhaps, given the quality of the work, it’s time to let him live out that dream. 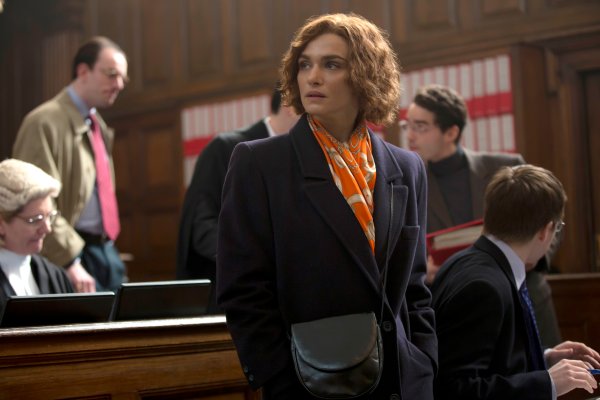 Review: Denial Takes on the Bullying Bluster of Liars
Next Up: Editor's Pick