People Are Drilling Headphone Jacks Into Their iPhone 7

This might seem obvious, but it’s a really, really bad idea to drill a headphone jack into the new iPhone 7. But that hasn’t stopped some people from trying it.

A new video published to YouTube depicts YouTube user “TechRax” placing the iPhone 7 into a vice and getting out his 3.5mm drill bit. He then takes the bit to the iPhone 7 and drills a hole into the device. Best of all, the headphones fit into the hole he drilled.

Since being published last week, the video has gone viral with nearly 10 million views.

While the TechRax video demonstrates that the headphone hole he drilled does not actually work, it hasn’t stopped several users from actually trying it out. In fact, the YouTube video is filled with comments from people who claim to have tried the technique—only to discover that drilling a hole into the smartphone leaves it unusable.

“Help,” one person wrote on the YouTube page on Sunday. “Now my old headphones fit in but the phone doesn’t work anymore!” Several other comments evoke a similar tone, with one user complaining that the iPhone 7 is “dead” and wondering if it would require a long charge to come back on.

Apple made the controversial decision to offer an iPhone 7 without the headphone jack, making it the first Apple smartphone not to offer a place for users to plug in their wired headphones. Instead, Apple shipped iPhone 7 units with an adapter that lets users plug in tethered headphones through the Lightning port. Apple is also releasing wireless earbuds next month, called AirPods, that will wirelessly connect to the iPhone 7.

While iPhone 7 demand appears strong despite the omission, some owners have criticized Apple’s decision. Some of those people are apparently so concerned with the move that they would believe a joke video showing a person drilling a hole into the bottom of the iPhone 7.

While TechRax’s video posting doesn’t suggest it’s a joke—the description says the video is “for those who don’t want to get $159 wireless AirPods or have to insert your headphones into an adapter every time you listen to music”—his profile and set of videos suggest he has a long history of jokingly fiddling with technology. His profile, for instance, says he’s been “smashing technology since 2011.”

Now, though, the joke has been taken seriously by iPhone 7 owners who are left with a very expensive brick that won’t be covered under warranty. And it’s all because they think they need a 3.5mm hole in their iPhone 7 to listen to music.

In truth, the iPhone 7’s adapter works just fine with wired headphones and drilling a hole in the smartphone won’t do any good; it’ll kill the iPhone 7 and void its warranty.

So, whatever you do, don’t drill a hole in your iPhone 7. 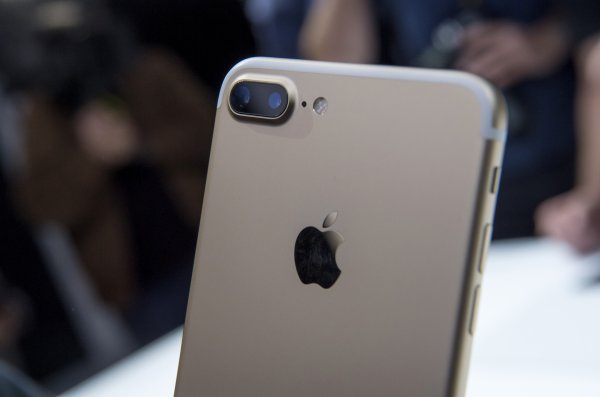 An Early Look at the iPhone 7 Plus' New 'Portrait' Camera Mode
Next Up: Editor's Pick