Tributes Pour in For Arnold Palmer, The Man Who Brought Golf to The Masses

In this April 12, 1964 file photo, Arnold Palmer, slips into his green jacket with help from Jack Nicklaus after winning the Masters golf championship, in Augusta, Ga.
AP
By Dominique Rowe

Arnold Palmer, who died on Sunday aged 87, was one of the first true superstars of sport. With his charisma, sporting prowess and animated performances on the greens, he picked up legions of loyal fans who become known collectively as Arnie’s Army.

Tributes poured in Monday with tweets and messages of condolence from politicians including President Obama, sporting stars Pele, Magic Johnson and Billie Jean King and a host of golfing greats.

“We just lost one of the incredible people in the game of golf and in all of sports,” Palmer’s old golfing rival and friend Jack Nicklaus said, according to the Associated Press. “He was one of my best friends, closest friends, and he was for a long, long time. I will miss him greatly.”

Tiger Wood’s messages were especially poignant; his most recent tweet before learning of Palmer’s death was a birthday message he sent to Palmer two weeks ago. 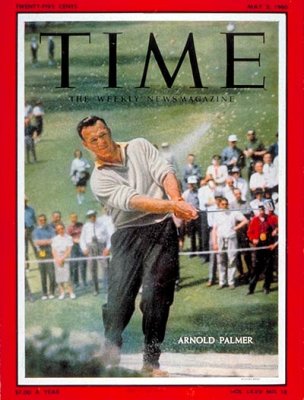 How Arnold Palmer Gave His Name to His Signature Drink
Next Up: Editor's Pick