The swing: fearless. The face: a camera’s dream. Arnold Palmer, who died on Sunday at 87, won his first Masters in 1958, during America’s great postwar expansion. This ascendant era spawned the leisure class, which took to golf, Eisenhower’s favorite game, and to the couch, to watch new TV sets in their living rooms. Into this fold stepped Palmer, a champ so strapping that he didn’t just sell golf to the masses watching the final round on Sundays. He sold clothes, rental cars, the cigarettes he smoked on the tee. Jack Nicklaus may have won more major championships than Palmer: 18 to Arnie’s 7. Michael Jordan may have moved more product. But the growth of golf, the growth of all sports as a marketing force boosting the bottom line of multibillion-dollar corporations, owes a debt to “the King.”

Between 1960 and 1963, Palmer won 29 tour events: the Associated Press later named him “athlete of the decade.” Near the start of that dominant stretch, Palmer signed on with agent Mark McCormack, the godfather of modern-day sports marketing, who founded sports-entertainment conglomerate IMG in 1960. By 1967, Palmer became the first golfer to earn $1 million in tour prize money; during his first two years with McCormack, Palmer’s endorsement earnings spiked from $6,000 to $500,000. He signed on as pitchman for sunglasses brand Ray-Ban, Pennzoil motor oil, Hertz, Rolex, United Airlines and many other companies. Later in his life, he even lent his name to his own namesake drink, sold by the Arizona Beverage Company: half iced-tea, half lemonade. When a writer from the Newark Star-Ledger asked an Augusta National Golf Club waitress how Palmer ordered his own drink, she responded, “He leaned over and said, ‘I’ll have a Mr. Palmer.’ And then he winked.”

Arnold Palmer was born in 1929 in Youngstown, Pa., to Deacon and Doris Palmer. His family moved into a small frame house adjacent to the sixth hole at the Latrobe (Pa.) Country Club, where his father was both the head pro and greenskeeper. Palmer learned the game from his dad: by age 5, young Arnie would station himself by the sixth tee and offer to drive shots over a drainage ditch that lay 120 yards down the fairway, for a nickel.

Even as a kid, Palmer put the work in. “He’d be yelling, ‘Watch me! Watch me! Watch me, Pap!'” Deacon Palmer told TIME in 1960. “You’d get so sick of him you’d feel like hitting him a lick.” The practice paid off; Palmer earned a golf scholarship to Wake Forest University, where just for laughs he’d sometimes shoot par while standing on one foot. During his senior year, however, Palmer’s best friend was killed in a car accident. Shaken, he quit school and spent three years in the Coast Guard. After being discharged in 1954, Palmer won the U.S. Amateur championship.

From here, Palmer’s celebrity took off. “He is a splendidly built athlete (5 ft. 11 in., 177 Ibs.),” TIME wrote in a 1960 cover story on Palmer, “with strength in all the right places: massive shoulders and arms, a waist hardly big enough to hold his trousers up, thick wrists, and leather-hard, outsized hands that can crumple a beer can as though it were tissue paper.” A CBS producer once remarked that as soon as he saw Palmer on camera, he knew golf could score on TV. On the course his stampede of fans, dubbed Arnie’s Army, rallied around their working-class hero, who hailed from a small steel town near Pittsburgh. While Nicklaus, his great rival, was a shotmaking machine, Palmer was the impish daredevil, charming fans with unpredictable swings. Palmer took seven major titles between 1958 and 1964.

Even though Nicklaus surpassed him as the game’s best player, and Palmer had last won a major more than a half-century ago, his popularity never waned. Palmer went on to build a sprawling business empire: at one time his name was attached to a golf-course design outfit, auto dealerships, a golf-equipment company, two golf clubs, an aviation company and a clothing contract with Sears. Palmer was a living, breathing fount of good feeling. No one played the role of Arnold Palmer better than Arnold Palmer. No one loved being Arnold Palmer more than Arnold Palmer. RIP, Arnie. The army salutes you. 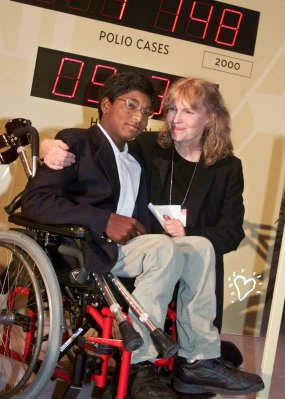 Mia Farrow's Son Thaddeus Has Died at 27
Next Up: Editor's Pick