By Maya Rhodan and Katie Reilly

President Barack Obama praised the coexistence of “protest and love of country” on Saturday during the opening of the Smithsonian National Museum of African American History and Culture, an occasion marked by reflections on the current racial tensions across the country.

“This is the place to understand how protest and love of country don’t merely coexist but inform each other, how men can proudly win the gold for their country but still insist on raising a black-gloved fist, how we can wear an ‘I can’t breathe’ T-shirt and still grieve for fallen police officers,” Obama said, addressing thousands of visitors who had gathered on the National Mall for the ribbon cutting ceremony, the culmination of a century of work aimed at commemorating the contributions of African Americans.

Obama wiped a tear from his cheek as he spoke about someday bringing a grandchild to tour the National Mall, viewing the Lincoln Memorial as well as the new museum.

“It is in this embrace of truth, as best as we can know it, in the celebration of the entire American experience, where real patriotism lies,” Obama said, referencing part of President George W. Bush’s speech. “It is an act of patriotism to understand where we’ve been, and this museum tells the story of so many patriots.”

Obama referenced recent events in Charlotte, N.C., where protests broke out this week after a black man was shot and killed by police officers. That incident followed the fatal police shooting of another black man, who was unarmed, in Tulsa, Okla.

“This museum provides context for the debates of our times. It illuminates them and gives us some sense of how they evolved and perhaps keeps them in proportion,” Obama said on Saturday. “Perhaps they can help a white visitor understand the pain and anger of demonstrators in places like Ferguson and Charlotte, but it can also help black visitors appreciate the fact that not only is this younger generation carrying on traditions of the past, but within the white communities across the nation, we see the sincerity of law enforcement officers and officials who, in fits and starts, are struggling to understand and are trying to do the right thing.”

Obama and his family have already perused the museum’s 12 inaugural exhibits, where thousands of donated and collected artifacts are on display. The President and First Lady Michelle Obama were interviewed at the museum on Good Morning America on Friday. During the discussion, the President suggested that Republican presidential nominee Donald Trump—who said this week that black communities are “absolutely in the worst shape that they’ve ever been in before”—should tour the museum to get a more accurate idea of what life was like for black Americans during slavery and Jim Crow.

These issues were on the minds of those in the crowd on Saturday, as some raised their fists in the air or knelt during a performance of the National Anthem.

“People fight what they don’t know. Maybe with knowledge people will learn who we really are. America doesn’t know our history. No body talks about ours. It’s almost like they want to push it under the bus,” Andra Richardson, who traveled to the opening from West Bloomfield, Michigan, told TIME. “I think that’s why it’s so many killings. With ignorance breeds contempt hatred and racism.” 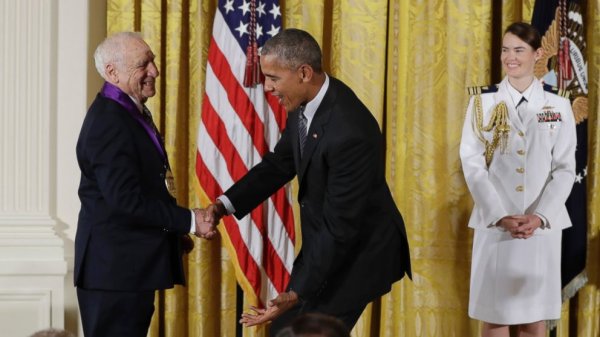 Mel Brooks Might Have Just Tried to Pull Down President Obama’s Pants
Next Up: Editor's Pick