By Sean Gregory and TIME Video

Who are the greatest athletes of all time? This question has driven millions of debates, with participants who may or may not be inebriated, in pubs and offices and living rooms across the world. Usain Bolt, the fastest human in history and winner of nine Olympic gold medals, visited TIME’s New York City offices on Sept. 22. We asked him to wade in: Who do you think are the four greatest athletes of all-time? Who’s on your Mount Rushmore?

“Oh my God,” Bolt says, before tilting his head down to think up a list. Muhammad Ali, he mentions first. Then Michael Jordan. Followed by Pele. Bolts look up. “And me,” Bolt says.

What’s his case? “I’ve accomplished something that no one has ever done before,” says Bolt. Besides his nine Olympic golds—over nine straight races in Beijing, London and Rio—Bolt also holds the world records in the 100-m and 200-m. “I’m comfortable to say I’m a legend, because I’ve done great things.” 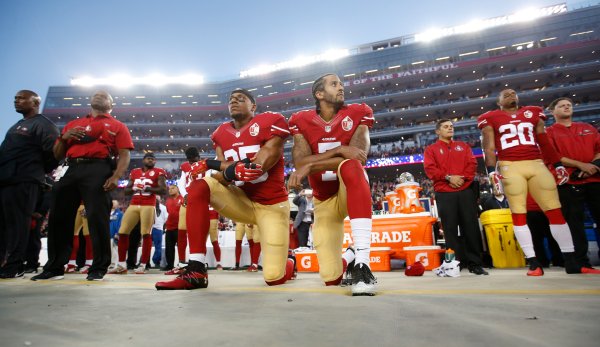 See Athletes Around the Country Protest During the National Anthem
Next Up: Editor's Pick