Here's Another Way Gary Johnson and Jill Stein Could Win

Neither Gary Johnson nor Jill Stein cleared the 15% polling mark they needed to make it into the first debate. But there’s another magic number they can still reach that could provide a huge boon to their parties: 5%.

That’s because if a political party draws 5% of the popular vote in a presidential election, it qualifies for public funding under Federal Election Commission guidelines. So if Johnson or Stein meet the mark in November, in 2020 the Libertarian Party or the Green Party could get access to tens of millions of dollars. (The exact figure would be determined by the ratio of each of their votes to the average of Donald Trump’s and Hillary Clinton’s.)

The two major-party candidates often reject public funds, because they come with strings attached that ban private contributions, and a Democratic or Republican presidential candidate stands to rake in much more money fundraising on his or her own. But with the 2016 public funding pot for a major party candidate set at $96 million, even a portion of that would be significant for minor parties whose candidates are fundraising below $10 million each so far in 2016.

(According to Center for Responsive Politics, Johnson has raised about $8 million and Stein about $2 million. By comparison, Trump’s campaign has raised more than $165 million and Clinton’s more than $370 million, not including spending by outside groups.)

Johnson’s team has been putting the 5% goal on the back-burner as it pushes instead to reach the more ambitious 15% polling average needed to make it on the next debate stage.

“There are more polls and more debates, and we plan to be on the debate stage in October,” Johnson said after he was barred from the first debate. “We are obviously setting our sights far higher than the 5% that would secure major party status. It isn’t part of our strategy,” Johnson spokesman Joe Hunter told TIME in a statement. “Rather, it is a benefit, albeit a historic one, of what we fully expect to accomplish in this election.”

But the 5% is playing a larger role in the strategy of Stein’s campaign. While neither candidate is using the lure of funding as an explicit pitch to voters, David Cobb, Stein’s campaign manager, says their campaign is using the promise of future change to try to inspire skeptical voters.

“Our message is not waste your vote on the failed policies of the two-party system. Invest your vote in a party committed to the real change we so desperately need,” he told TIME.

The key is in the word “invest” — Cobb hopes voters, particularly millennials, those who supported Vermont Sen. Bernie Sanders and those who are cynical about the whole electoral process, will understand that supporting Stein now could pay off for the Green Party in future elections.

According to a Real Clear Politics poll average, Johnson is currently at about 9% and Stein at about 3%. 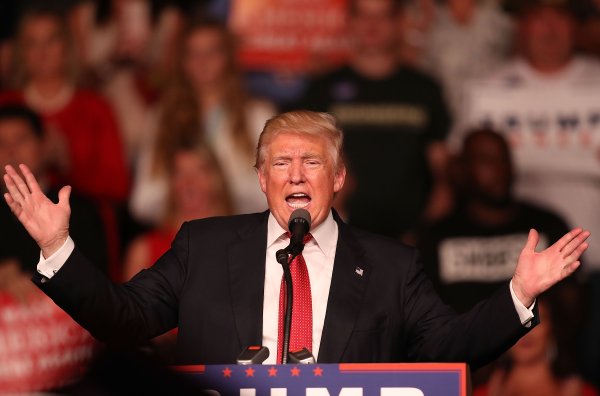