Why Getting Back in Shape is So Hard

Taking a month or two off of regular exercise may not be so benign. A new small study shows that when muscles take a break, they maintain very little muscle memory from the prior exercise.

The goal of the new study, published Thursday in the journal PLOS Genetics, was to gain a better understanding of how exercise influences the body on a genetic level. As TIME recently reported, exercise carries a whole host of benefits for the body, from aging to brain health to a stronger ability to fight infections. But how that exercise translates to changes in genetic activity is more unknown.

In the report, 23 people trained one of their legs for three months by kicking and pulling a bike-like contraption 60 times a minute for 45 minutes (see below). They did this training four times a week for three months. After that, the people in the study took nine months off. The study authors took skeletal muscle biopsies from both legs before and after and found that the cells in the muscles expressed over 3,000 genes in different ways after a person exercised. However, after the fitness hiatuses, the scientists couldn’t detect any exercised-related genetic changes between the people’s trained and un-trained legs.

This is an example of what the leg training exercises looked like.
Karolinska Institutet

“We couldn’t see any differences at the gene activity level,” says study author Maléne Lindholm of the Karolinska Institutet in Sweden. “Most effects are lost by a month or two of no training.”

After that, 12 of the people in the study started training both of their legs. When the researchers compared biopsies of the two trained legs, they once again saw changes in genetic activity, but the leg that had undergone training nine months early looked virtually the same as the newly trained leg. “We did see some differences in the response but not substantial enough to claim some type of memory,” says Lindholm.

Lindholm says the study could be interpreted in a couple ways. It underlines fact that exercise can spur healthy biological changes, and that keeping up the practice is important to ensure those healthy changes are sustained. On the other hand, she says that the results can be encouraging to people who are sedentary. It suggests they can achieve the same benefits from exercise as anyone else. “The study could be used as positive encouragement,” says Lindholm. “It’s never too late to start training from a muscle perspective.” 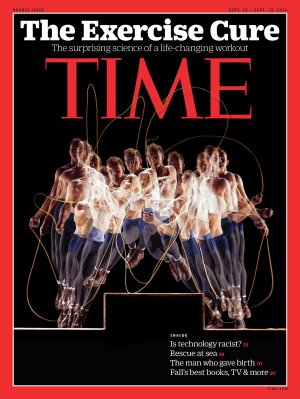