Donald Trump on Thursday clarified his support for expanding the controversial policy of stop-and-frisk and said he was referring specifically to its use in Chicago.

Trump spoke about stop-and-frisk during a Fox News town hall on Wednesday, when asked what he would do to prevent violence in black communities as president. “I would do stop-and-frisk. I think you have to,” Trump said. “We did it in New York. It worked incredibly well, and you have to be proactive and, you know, you really help people sort of change their mind automatically.”

New York City’s stop-and-frisk program, which allowed police officers to stop a person on the street based on suspicion of criminal activity, was ruled unconstitutional and racially discriminatory by a federal judge in 2013.

In an interview on Fox and Friends on Thursday, Trump said he was “really referring to Chicago” when he voiced support for the policy.

“Now, Chicago is out of control. I was really referring to Chicago with stop-and-frisk. They asked me about Chicago, and I was talking about stop-and-frisk for Chicago, where you had 3,000 shootings so far this year,” Trump said, likening the city to a war-torn country.

In August, the Chicago Tribune reported that 2,800 people in the city had been shot so far in 2016—more than in New York City and Los Angeles, combined.

“I think Chicago needs stop-and-frisk,” Trump said. “Now, people can criticize me for that or people can say whatever they want, but they asked me about Chicago, and I think stop-and-frisk, with good, strong, you know, good, strong law and order. But you have to do something. It can’t continue the way it’s going.” 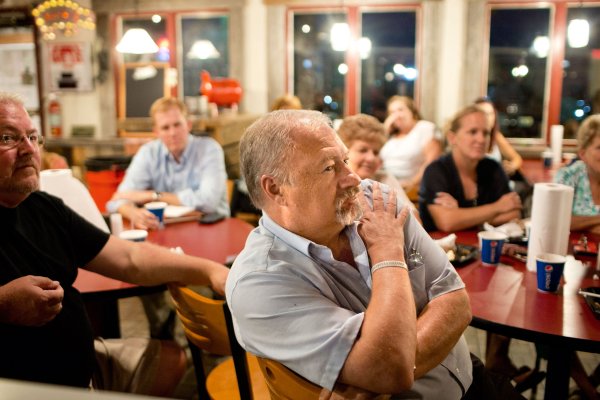 Heroin, Obamacare and Pride: Why Trump Is Finding an Audience In Southern Ohio
Next Up: Editor's Pick