Authorities in Charlotte say they have no plans to release the video of Keith Lamont Scott, the black man killed by police there this week, to the general public, Charlotte-Mecklenburg Police Chief Kerr Putney said in a news conference Thursday.

Scott’s family has requested to see the video of his shooting, Putney said, and he hopes to fulfill that request, but he said it would be inappropriate to “display a victims worst day for public consumption.”

Putney also said the video does not provide “definitive visual evidence” that Scott pointed a gun at police officers, as they have said, but he added that other evidence and witness reports support the police story.

After Scott, 43, was killed on Tuesday, local police said they warned him to drop his gun, but Scott’s family has said he was not armed, and that he was only holding a book. The death sparked two nights of protests this week that resulted in a number of injuries and property damage.

Wednesday’s protests were interrupted by a shooting that left one man critically injured. Police are still reviewing evidence in that shooting and looking into allegations that an officer was involved, Putney said Thursday.

Attorney General Loretta Lynch on Thursday called for people to protest peacefully, urging those “bringing violence” to stop. She also thanked police officers during a news conference, and addressed those who have been protesting peacefully, saying: “We hear your voices and we feel your pain.” 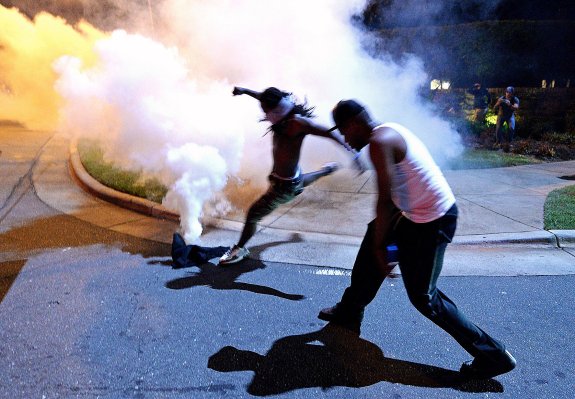 A Night of Chaos: Photos From Charlotte Protests
Next Up: Editor's Pick