Why More Jobs in Ethiopia Could Mean Fewer Refugees in Europe

According to the International Organization for Migration, Eritreans and Somalis make up some of the largest numbers of African refugees who have attempted to reach Europe by rubber boat and overloaded dinghy over the past two years. But most of them are not coming straight from their despotic and war-torn countries. They usually start their journeys in the vast refugee camps of Ethiopia, where conditions are wretched and opportunities scarce. The refugees might be safe from conflict and persecution, but few see the camps as a viable alternative to living in war, famine or under an oppressive dictatorship like Eritrea’s. So they leave in desperate search of something better in Europe.

Read More: The Only Way to Stop African Migrants Is to Improve Conditions at Home

Which is why the recently announced plan by Britain, the European Union and the World Bank to build a industrial parks and create 100,000 jobs in Ethiopia is one of the first promising moves in a long litany of half-hearted attempts to deal with Europe’s migration crisis. The plan, which was initially proposed by the Ethiopian government, calls for two industrial parks to be built at a cost of $500 million. In exchange, Ethiopia, which currently hosts 700,000 refugees mostly from Eritrea, Somalia and South Sudan, is required to grant employment rights to 30,000 asylum seekers. Many of the jobs at the new industrial parks will be reserved for citizens of Ethiopia, which is facing its own unemployment crisis, and has also seen many of its own nationals attempt the same dangerous routes to Europe.

In making the announcement at the U.N. summit on refugees in New York City on Sept. 21, U.K. Prime Minister Theresa May said the project would be a model of support for other poor countries hosting large refugee populations. Jordan, Lebanon and Turkey, who are home to 4.5 million Syrian refugees, and Kenya, which hosts more than 500,000 refugees from Somalia and South Sudan could greatly benefit from similar deals.

Read More: The Army of Volunteers Helping Migrants in the Calais Jungle

Giving people opportunities at home, whether they are refugees or citizens, is an important first step towards stemming the illegal, and dangerous, trafficking of migrants into Europe. But it isn’t the only one. No matter how many jobs are created, there will always be people who want to migrate, whether to start a new life, see something new, or rejoin family. And Europe, which is facing a demographic crisis as its own population numbers decline, will need those migrants to flourish. So while creating jobs in Ethiopia, and elsewhere, is essential for decreasing the outward flow of job seekers, destination countries will still have to create legal, and safe, channels for those they need, and those who are going to come anyway. 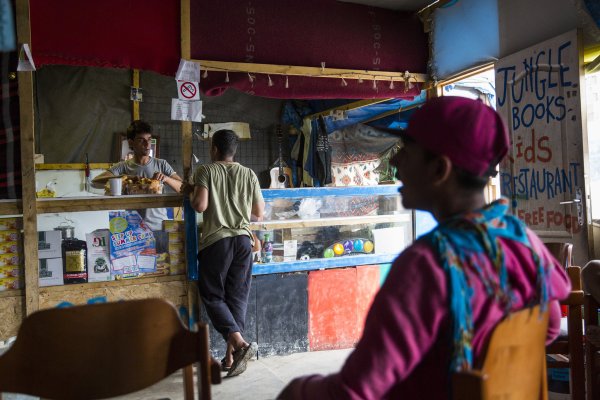 The Army of Volunteers Helping Migrants in the Calais Jungle
Next Up: Editor's Pick