Fifth-graders flow through yoga-inspired poses in a mindfulness class at a public school in Louisville, Ky.
Luke Sharrett for TIME
By Mandy Oaklander

Christina Johnson’s classroom must be the most peaceful place at Cane Run Elementary School in Louisville, Ky. Instead of desks, six rows of black yoga mats line the floor. All the lights are off except for one gently glowing lamp. Underwater sounds gurgle from a pair of speakers.

Today nearly two dozen fifth-graders are sitting on the mats with their shoes off and eyes closed, following Johnson as she guides them through a relaxation exercise. “Take a nice, nice deep breath in, and keep your hands on your anchors, please,” Johnson says. The kids place one hand on their chest, the other on their belly. Johnson taps a chime and the kids know what to do: listen intently, and when the long reverberation stops, their hands shoot up. “Good job,” Johnson says. “We’re ready.”

For the next 45 minutes, Johnson leads the class through exercises that are designed to increase mindfulness–a catchall term for practices that help you focus on the present moment. They learn how to savor the taste of a mint until it dissolves on their tongue; they move their little bodies into poses lifted straight from a yoga studio.

Cane Run, which requires that students attend the class twice weekly from kindergarten on up, is at the frontier of a growing movement. Mindfulness has come to the classroom. At Cane Run, it’s still an experiment: researchers want to know if a program like this can improve students’ focus, behavior, academic performance–even their empathy. A seven-year study, called the Compassionate Schools Project, is under way in 26 Louisville schools. If all goes as well as researchers expect–and if officials can secure the funding–mandatory mindfulness classes will wind up at every public school in the city.

That mindfulness is taking its place alongside math in elementary school says something about the stressed-out state of kids’ brains these days. Educators increasingly believe that mindfulness can be an antidote to three of the biggest mental-health challenges that kids face: anxiety, trouble paying attention and bullying.

It makes sense. In adults, the benefits of activities such as yoga, meditation and deep-breathing exercises are well established. A robust body of research shows that these exercises lower stress, ease anxiety, improve sleep, ward off sickness, reduce depression and even blunt pain. If mindfulness can work even some of the same wonders in children, the implications would be huge. Up to 20% of kids in the U.S. have anxiety–and anxiety is the No. 1 predictor of depression in adolescence. Diagnoses for attention-deficit/hyperactivity disorder (ADHD) in kids show no signs of slowing, creeping up from 7% in 2003 to 11% in 2011.

Classes in mindfulness, its advocates hope, can make a dent in those worrying numbers, while also teaching kids softer skills, like how to communicate feelings, how to get along with classmates and how to modulate reactions–all skills that researchers believe the practice helps develop. If kids start early, the skills may prove useful down the road at countering the stresses and distractions of adult life. “These are not niceties. These are critical capabilities,” says Patrick Tolan, a professor at the University of Virginia Curry School of Education who is leading the analysis. “If children today don’t learn how to take care of themselves, it’s going to have enormous impact on our health care costs and on the health of our nation.”

Although research on mindfulness in children is still preliminary, studies show that it can help kids who have anxiety and trouble paying attention with their schoolwork, behavior and stress regulation. First-through third-graders who were taught mindfulness and breathing techniques had fewer ADHD symptoms and less test anxiety, one study found. Even for kids without these issues, mindfulness has been shown to increase kindness, sleep quality and even math scores.

This training appears to work in kids as young as 4. Preschoolers who received 12 weeks of a kindness and mindfulness class earned better grades and were more likely to share than counterparts in a control group, according to research by Lisa Flook, a scientist at the University of Wisconsin who is studying a mindfulness program in several schools in Madison. “A body of work shows there are these innate prosocial and altruistic qualities present from a very early age in children,” Flook says. “This is a way of nurturing the seeds of kindness in children.”

In another ongoing study, researchers from the University of North Carolina Wilmington teach preschoolers yoga poses and relaxation exercises. After just two weeks, these kids exhibit better attention, awareness, gratitude and happiness compared with kids who did not have the classes. “What’s amazing is that this brief exposure appears to be so powerful,” says lead researcher Simone Nguyen, a developmental-psychology professor at the university. “A few minutes of breathing, a few minutes of paying attention to the moment are appearing to make a difference.”

A movement is also under way to train teachers in mindfulness. “Our theory is that if we actually produce educators that are more aware and empathic and attuned to children, that in its own right is going to have an effect on kids’ nervous systems,” says Chris McKenna, program director of Mindful Schools, a group in Emeryville, Calif., that trains teachers in mindfulness.

“There’s an almost immediate calming effect of mindfulness practice,” says Randye Semple, an anxiety-disorder expert and assistant professor at the University of Southern California’s Keck School of Medicine. Calm breathing triggers the parasympathetic nervous system–the opposite of the fight-or-flight response–which slows heart rate and makes blood pressure go down, she says. Mindfulness training also encourages kids to focus attention on whatever is happening in the moment. “Essentially, mindfulness is attention training,” she says. “We’re showing them that attention can be increased, that it can be ramped up and it can be trained.”

Another study this summer found that students had higher levels of the stress hormone cortisol if their teachers reported being burned out. But if stress is contagious, so is its opposite. In a study of hundreds of teachers across 36 public elementary schools in New York City, half of the teachers received mindfulness and stress-reduction training while the other half did not. Those who were trained in mindfulness became better at handling their own stress–and as it turns out, the benefits appeared to spread to the kids too. According to Tish Jennings, associate professor of education at the Curry School of Education at the University of Virginia, the teachers who got the training were more sensitive to their students’ needs and better at fostering a productive environment for learning.

Encouraged by results such as these, a growing group of researchers, advocates and parents are pushing for mindfulness to be taught in all public schools. In some places, like Louisville, it could replace an enrichment or health course, while other districts will pick and choose parts of the practice to incorporate into existing classes. Other schools may try to create a more mindful culture by training teachers instead of adding a dedicated class. Private and charter schools across the country have been on to this for some time. “Self-regulation and attention can benefit kids on both ends and throughout the [socioeconomic] spectrum,” says Flook.

Not everyone thinks mindfulness belongs in schools. Classroom time is more prized than ever–and resources are scant. “If you can’t get art and music in a curriculum, you’re not going to be able to get this,” says McKenna. Nor do all parents find the material acceptable. One school district in Ohio piloted a mindfulness program in 2011 and found the results so impressive that it soon expanded to other schools. But parents complained that they felt the practice was teaching religion–Buddhism–and had no place in the classroom. In 2013, the district, in Canton, shuttered the program.

It’s a criticism researchers have heard before. “I don’t think any of us deny that most of these general practices and concepts come from Buddhism,” says Semple. “But we’re not teaching Buddhism. We’re teaching kids how to pay attention.”

Jennings too is careful to identify her program as “100% secular.” “We don’t teach anything related to other parts of yoga that might be considered spiritual or religious.” That’s part of the reason researchers are studying it closely. If the results show what they expect–a nearly universal benefit for kids–researchers hope it will lead to even broader adoption nationwide.

In Louisville, Christina Johnson knows it’s already working on her fifth-graders. She talks them through their final movements–raising both arms to the sky in a pose she calls “sunrise,” then releasing “all that negative stuff” as they flop over their toes–and then tells them to close their eyes and check in with their feelings. Moments later, a boy’s soft sniffle breaks the stillness. Johnson hugs and holds him as he whispers to her about problems at home. No one snickers. No one even opens their eyes.

“When the brain gets still and everything gets calm, the feelings come out,” Johnson says later. “That’s why this needs to be in schools.” 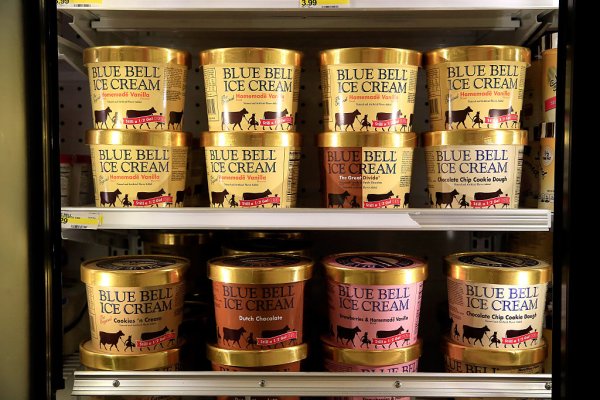