There's No Such Thing As a Selective Patriot

Colin Kaepernick #7 and Eric Reid #35 of the San Francisco 49ers kneel in protest during the national anthem prior to playing the Los Angeles Rams in their NFL game at Levi's Stadium in Santa Clara, Calif., on Sept. 12, 2016.
Thearon W. Henderson—Getty Images
Ideas

Tulsa, Okla., police killed Terence Crutcher in cold blood. The video is hard to watch. You see a black man with his hands up, walking toward his stalled vehicle and posing little threat to the officer, who has her weapon drawn. He was unarmed. Within 30 seconds of the arrival of police backup, Crutcher was tased and shot. The aerial footage showed his body falling helplessly to the ground. Blood poured into the street under him. And the police offered little assistance to save the man one officer described as “a bad dude.”

On Sept. 14, just two days earlier, Tyre King was killed by police officers in Columbus, Ohio. He was only 13 years old. Officers responded to a report of teenagers engaged in an armed robbery of $10. When they arrived on the scene, the police confronted three black males who matched the description. King, the police reported, ran, then reached for what turned out to be a BB gun in his waistband and was shot “multiple times.”

His parents hired an independent forensic pathologist. “Based on the location and the direction of the wound paths it is more likely than not Tyre King was in the process of running away from the shooter or shooters when he suffered all three gunshot wounds,” Dr. Francisco Diaz, the medical examiner in Wayne County, Michigan, reported. King was only 5 ft. tall and weighed less than 100 lb.—visibly a child.

Colin Kaepernick of the San Francisco 49ers has refused to stand for the national anthem in protest of monstrous acts like these. He and other athletes who have followed his lead have been viciously criticized. Accused of being unpatriotic and of betraying the sacrifice of our men and women in uniform. These are the same people who recently booed President Obama’s 9/11 tribute video in football stadiums across the country; the same people who would describe Cliven Bundy, the Nevada cattle rancher who launched an armed standoff with law enforcement, as a patriot; the same people who defend the Confederate flag. They are selective patriots. We should not take them seriously.

Instead, we must continue to fight for our dead. Protect our children. And defend an idea of democracy where lives of the likes of Terence Crutcher and Tyre King are valued as much as those of any white person in this country. Until then, continue to take a knee, Colin Kaepernick. And the selective patriots can go to hell. 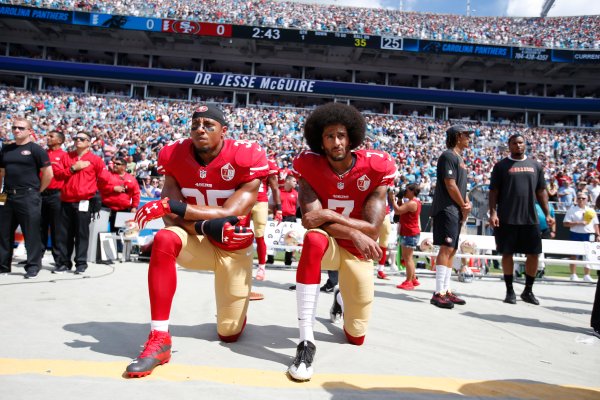 Colin Kaepernick Had No Choice but to Kneel
Next Up: Editor's Pick