A Museum Embraces the Triumph and Struggle of Black America

Exterior of the National Museum of African American History and Culture.
Andrew Moore for TIME
By Richard Lacayo

Any history museum is a storytelling machine. But the newest one in Washington, D.C., starts telling its story before you even enter. The very silhouette of the National Museum of African American History and Culture has embedded meanings. Above a glass-enclosed lobby, the building rises in three inverted trapezoids. That multitiered exterior is borrowed from a crown motif of the Yoruba, the West African people who established one of the most important civilizations in sub-Saharan Africa and who also made up a sizable part of the U.S. slave population. So in its outlines, the building remembers the continent that was the homeland of most American slaves. But it also refers to the American side of the African-American experience, because that saw-toothed frame is covered by a perforated lattice of bronze-coated aluminum meant to recall the ornamental ironwork produced by slaves and freedmen in New Orleans. It says that Africa may have been the place most black Americans came from, but America was the place they built.

Lonnie Bunch III, the museum’s founding director, was once head of the Chicago Historical Society, and before that an associate director of the Smithsonian’s National Museum of American History, so he’s given a lot of thought to this storytelling business. He says he wants people to understand that his new institution is “a museum of American history, but one that uses African-American culture and history as a lens to understand it. When you walk into this museum you will absolutely see ‘insider stories’ about black life. But the goal is to bring those back to broader questions, a broader story about America.”

That’s an idea carried out by the building’s design, which is chiefly the work of British architect David Adjaye, who was born in Tanzania to Ghanaian parents. (He teamed up for this project with several U.S. firms, including the Freelon Group, the SmithGroup and Davis Brody Bond.) Adjaye–whose other American works include Denver’s Museum of Contemporary Art; Sugar Hill, a mixed-use affordable-housing development in Manhattan; and an ingenious neighborhood library in Washington–says symbolic gestures like the museum’s exterior are deliberate. “The whole project that Lonnie was trying to do drove me to be much more explicit about creating a narrative construction, making signifiers that help the museum to explain itself,” he says.

Another way he did that was by cutting large apertures in the latticework at crucial points. The five-acre parcel occupied by the museum was the last buildable site on the National Mall and one of the best located, directly across from the Washington Monument, with views overlooking the Lincoln Memorial, the National Archives Building and the White House. By opening sight lines to those resonant places, Adjaye ties the African-American saga into the wide-screen narratives of U.S. history. Yet at the same time his museum looks very different from most of official Washington. His metal exterior is distinctly modern, and on a Mall dominated by neo-Classical piles of pale marble and limestone, decidedly, deliberately dark. Adjaye is well known for his darker palette. One of his first residential projects in London was a black-walled cube called the Dirty House. His Sugar Hill building is graphite gray. “Lonnie and I agreed,” he says, “that having a dark presence on the Mall would be a beautiful thing.”

That presence was a century in the making. The idea originated in 1915 with black Civil War veterans who had gathered in Washington to mark the 50th anniversary of the war’s end. They formed a committee to promote a monument on the Mall to the achievements of African Americans. By 1929 Herbert Hoover had even established a commission to devise a plan for a museum, but nothing came of it until Georgia Representative John Lewis, a leader of the Student Nonviolent Coordinating Committee in the 1960s, arrived in Congress in 1987 and began introducing legislation every year to make the project a reality. Despite the dogged opposition of North Carolina Senator Jesse Helms, by 2003 there was enough bipartisan support for a bill to gain passage and be signed by George W. Bush, a major supporter.

Two years later Bunch was hired as director. All he needed to do was create a museum from the ground up. Because Congress was going to provide only half of what ended up being the $540 million initial cost of the project, Bunch spent a lot of time raising funds from private donors, including some very famous ones. Michael Jordan gave $5 million. Oprah Winfrey’s foundation provided $21 million, which is why the museum’s theater is named for her.

To build a collection, Bunch launched a series of Antiques Roadshow–style events in cities across the U.S. People were encouraged to bring in African-American family heirlooms to be evaluated by museum experts and maybe to be donated. Through that kind of outreach the museum acquired nearly four-fifths of the roughly 34,000 items in its collection, including one of the most precious, a Bible once owned by the slave-revolt leader Nat Turner.

An institution that traces the narrative of African-American life for what may be as many as 4 million visitors a year has to satisfy no end of tricky agendas. It has to sift the past to rescue people from anonymity, as it does in a room that lists the names of almost all the 612 slaves Thomas Jefferson owned in his life. It has to represent not only the brutality and sheer perversity of slavery but also the resourcefulness of those who suffered it. It has to acknowledge the election of an African-American President but also the plain fact, in the era of Black Lives Matter, that America remains a work in progress.

But if it has to tell stories of pain and sacrifice, those cannot be the only ones. It can’t forget about Chuck Berry’s hilarious red Cadillac or Muhammad Ali’s headgear or the outfit Marian Anderson wore to sing in triumph from the steps of the Lincoln Memorial after being barred from performing elsewhere because she was black. It can very well contain a concrete guard tower from the notorious Louisiana State Penitentiary at Angola, but also something much more literally uplifting, a plane used to train some of World War II’s Tuskegee Airmen, the first black American military pilots. It has to both pass through hell and point to the wild blue yonder.

Bunch knows this. “One of my goals was to help the public embrace the ambiguity of the past,” he says. “That’s where the greatest learning is. We want you to come to this museum, and we expect you to work a little bit.”

Almost two-thirds of the museum’s 400,000 sq. ft. is below ground, where galleries lay out the complicated journey from slavery and the fight against it, through the daily humiliations and worse of the Jim Crow era to the escalating struggles for civil rights, until the story climaxes in the complicated present. In those galleries visitors will find things like an ominous pair of iron shackles, a bill of sale for a 16-year-old girl named Polly–price: $600–and, at the outer edges of the grotesque, an 1859 advertisement for a “Great Negro Mart” in Memphis, promising a “general assortment of Negroes at private sale and auction.” They’ll see a cramped slave cabin and an entire Southern Railway car, a 77-ton relic from the era of segregated travel and the legal fiction called “separate but equal.”

Of the museum’s five aboveground floors, one is devoted to African-American involvement in social pursuits and institutions like schools, churches, business, sports and the military. Another courses through high points of black cultural achievement in areas like music, literature, television and the visual arts. The museum can show only about 10% of its collection, so over time some displays will change. After all, African-American history–and American history–will keep on happening. The long effort to create this museum may be a tale that’s completed, but the story it was built to tell has much more to come. 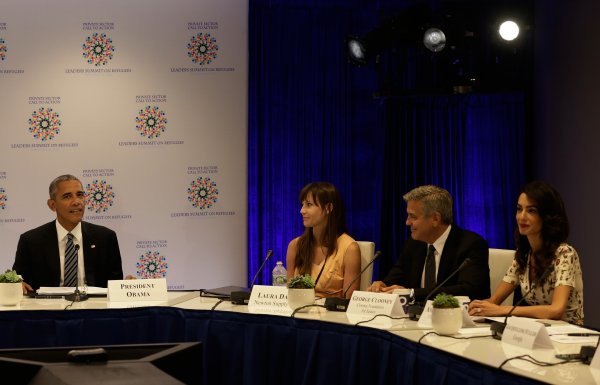 Obama Shares Letter from Child Offering Home to Syrian Boy in the Ambulance
Next Up: Editor's Pick