Rami Malek as Elliot Alderson in the season finale of Season 2 of Mr. Robot.
Michael Parmelee/USA Network
By Daniel D'Addario

Last week, I wrote that Mr. Robot had a great deal of narrative work to do in the final hour of its second season to keep viewers invested—the show can’t be all-mystery, all-the-time, without at least some viewers growing alienated. With the season finale having now aired, it’s apparent that this advice was followed… sort of? As with all things Mr. Robot, it’s complicated. The show gave enough information to keep things interesting, while leaving a great deal of what’s going on obscured—over and above typical cliffhangers.

And yet I think the finale was the best possible way the show could have exited a second season that made meaningful missteps. To explain everything would make the show something other than what it is. With the small amount of clarity the final episode provided, we can look forward to a season 3 in which the show’s storytelling catches up to its style and flair.

The finale’s revelations included that Scott Knowles (Brian Stokes Mitchell) has been sending gifts to Joanna (Stephanie Corneliussen) as a way to torment her with false hope over her missing husband, Tyrell (Martin Wallström); that the FBI has a great deal more information on the fsociety hack than Darlene (Carly Chaikin) realized, and that she may find herself cooperating; and that Tyrell has been in communication with Angela (Portia Doubleday). All of these revelations represent more than just new information: They’re a culmination of a season in which characters, whether in prison, in exile, or just in their own storylines spun their wheels alone. And while nothing was definitive—we don’t know whether Joanna meant to get Scott to beat her as part of a long-game ploy, whether Darlene will cooperate, or what Angela’s plan is—it was enough. It felt refreshing to see people actually, finally, colliding with one another—like a justification for the methodical bricklaying the show’s done on each individual character’s storyline this season.

Mr. Robot is chilly and aesthetic; excessive This is Us-style sentiment is not part of the deal it makes with audiences. And yet it has the ability to be more human than much of season 2 was. The problem with the second season, really, was that when you focus on plot over character, it’s a bit confounding when the plot denies satisfaction. What are we watching for? The show’s confidence—the daring lengthy fake-eighties sitcom sequence, Rami Malek’s virtuoso performance, an overreliance on music cues—doesn’t just paper over the show’s shortcomings, it enables them. Because Malek can do anything, he was given more to do than the show’s story demanded, off in a prison plotline that gave us relatively little in the long run. Because any individual moment can seem startling and profound through show creator Sam Esmail’s eyes, there’s little immediate imperative to knit it all together into a larger, coherent artwork.

I wasn’t sure, given all that, that Mr. Robot would pull off a finale that gave us the show at its best—with insights into individual characters who fit into a larger, comprehensible story. The narrative satisfactions of the finale weren’t limited to the fact that we know, now, more about how the larger picture—the fitting-together promises more and better interactions between a large and talented ensemble cast in season 3. Perhaps someday, when Mr. Robot has ended, I’ll look back at the prison plotline or Darlene or Angela’s segregation from the rest of the cast and see how it was key to the whole show’s success. From this vantage point, though, I can say that the show seemed to undergo a bit of a sophomore slump as it figured out the story it wants to tell, and that for the first time this season, I’m excited, not just impatient, to see what’s next. 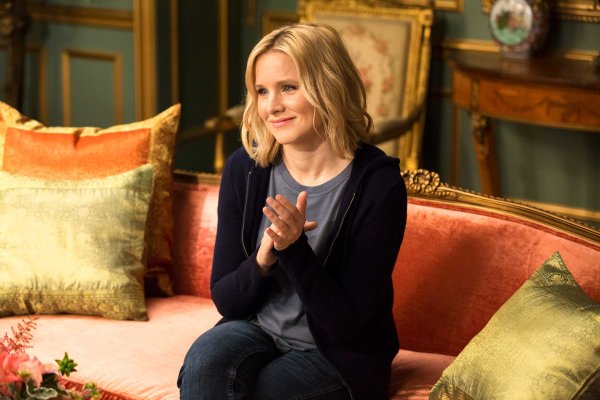 Infinite Jests from the Good Place
Next Up: Editor's Pick