President Obama sought to open hearts and minds on the Syrian refugee crisis during an appearance at the United Nations this week by sharing the words of a child who wrote to the president and offered to host the boy in the ambulance.

Six-year-old Alex wrote to Obama last month after seeing the now-famous image of Omran Daqneesh sitting calmly in the back of ambulance covered in dust and blood. “Remember the boy who was picked up by the ambulance in Syria? Can you please go get him and bring him to [my home]?” Alex wrote. “We will give him a family and he will be our brother.”

Obama suggested that such an attitude could be an antidote to wariness of refugees in today’s political environment. “The humanity that a young child can display, who hasn’t learned to be cynical, or suspicious, or fearful of other people because of where they’re from, or how they look, or how they pray, and who just understands the notion of treating somebody that is like him with compassion, with kindness,” Obama said at the Leaders Summit on Refugees. “We can all learn from Alex.”

The message came as controversy on social media continued over a tweet from Donald Trump Jr. likening refugees to Skittles. “If I had a bowl of skittles and I told you just three would kill you. Would you take a handful?” the post asked. 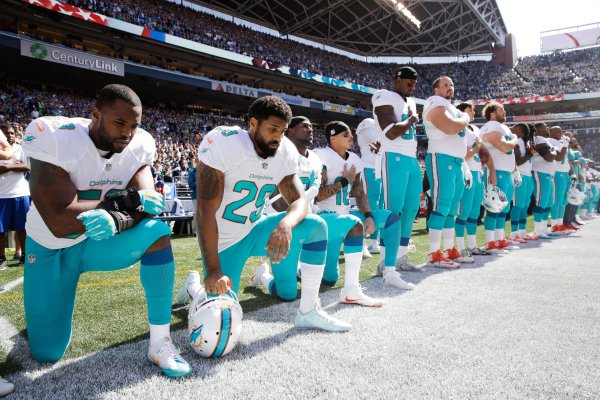 All Across the Country, Athletes Are Fueling a Debate About How America Defines Patriotism
Next Up: Editor's Pick