India and Pakistan's Verbal Battle Over the Kashmir Attack Goes to the U.N.

Pakistani Prime Minister Nawaz Sharif dedicated the bulk of his speech at the U.N. General Assembly in New York City on Wednesday to addressing an increasingly hostile dispute with India over Kashmir, furthering the war of words between the two countries following a militant attack on one of the region’s Indian army bases.

“Peace and normalization between Pakistan and India cannot be achieved without a resolution of the Kashmir dispute,” Sharif said, adding that peace talks are “no favor to Pakistan” and are “in the interest of both countries.”

He also urged “an independent inquiry into the extrajudicial killings, and a U.N. fact-finding mission” to investigate what he called “brutalities” against the Kashmiri people by Indian armed forces in the region.

India responded to Sharif’s statements by condemning Pakistan, yet again, as a “terrorist state,” with Indian U.N. representative Eenam Gambhir labeling it the “Ivy League of terrorism.”

“The worst violation of human rights is terrorism,” Gambhir said. “When practiced as an instrument of state policy, it is a war crime.”

Indian government officials also pointed out that Sharif did not mention Sunday’s attack near Uri, in the Indian-controlled part of Kashmir, which left 18 soldiers dead. Pakistan previously denounced what it says are “baseless and irresponsible” accusations of its involvement, and asked India for “actionable intelligence.”

Kashmir has been a thorn in the two neighbors’ relationship for almost seven decades, with three of their four wars since gaining independence in 1947 fought over the mountainous territory that both countries claim. The simmering dispute has escalated in recent weeks, with the death of a young Kashmiri separatist leader sparking internal protests that have left dozens dead from Indian police gunfire.

The Uri attack is seen as the last straw, with India’s Prime Minister Narendra Modi under public pressure to respond in kind. However, after being warned against reckless military retaliation by government and military officials (both India and Pakistan possess nuclear weapons), he appears to have opted for diplomatic censure instead.

The region, however, remains fraught with emotion, with Indian broadcaster NDTV reporting that hundreds of young men signed up in an army recruitment drive in Kashmir three days after the attack. 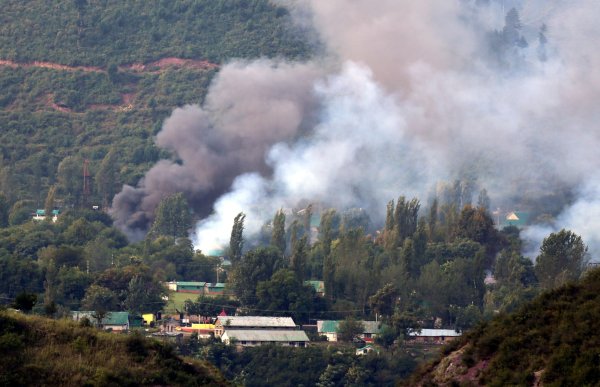 Terror Attack in Kashmir as India-Pakistan Conflict Flares Again
Next Up: Editor's Pick