Donald Trump's Plans Would Add $5.3 Trillion to the National Debt

If you add up all of Republican presidential candidate Donald Trump’s preliminary policy proposals—from increasing defense spending to creating a new childcare program—then subtract the amount of money he plans to raise with his tax plan, the result is some serious red ink.

According to an analysis by the Committee for a Responsible Federal Budget, Trump’s plans would contribute $5.3 trillion dollars to the national debt. Democratic presidential candidate Hillary Clinton’s plans, by comparison, would only increase the debt by $200 billion.

The Committee for a Responsible Federal Budget’s analysis is an update to its previous report Promises and Price Tags: A Fiscal Guide the 2016 Election, published in June, which analyzed the cost of every Trump and Clinton proposal on record at the time. The most recent update reflects both candidates’ amended plans as reported as of September 21, 2016. It also excludes any calculation of economic impact.

Read next: What the Clinton and Trump Tax Plans Would Mean For You

The report finds that Trump’s plan would result in an overall reduction in non-interest federal spending (that is, all government outlays not spent servicing U.S. debts) by about $1.2 trillion over the next decade. He would do that by cutting Obamacare, Medicaid and other non-defense spending. But he would also slash about $5.8 trillion in revenue through his tax proposal, according the report.

While Trump has simultaneously advocated for two different tax plans, his most recent proposal would result in a roughly $4.5 trillion reduction in revenue from cuts to individual and business taxes, and another $1.2 trillion from repealing taxes that pay for Obamacare, the report found.

Clinton’s plan, in contrast, would increase federal spending by about $1.65 trillion over the next decade. That includes a $500 billion outlay on her new college education program and $300 billion each on paid family leave and infrastructure. But Clinton’s plan would also boost revenue—to the tune of about $1.5 trillion—by significantly increasing taxes on very high income earners and businesses.

Under Clinton, the national debt would rise to above 86% of GDP, the report said, while under Trump, it would top 105%. 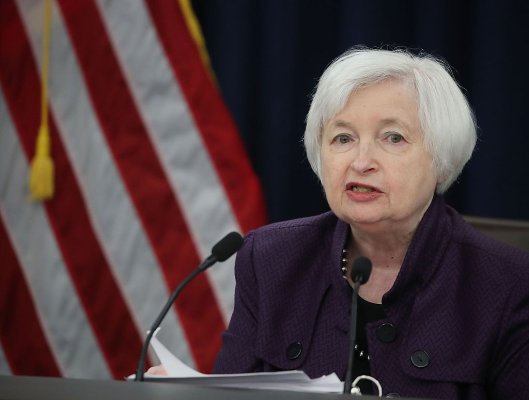 Federal Reserve Chair Janet Yellen Fires Back at Donald Trump: 'We Do Not Take Politics Into Account'
Next Up: Editor's Pick