Google Allo vs. Apple iMessage vs. Facebook Messenger: How They Compare

The messaging apps you likely use each day, like Apple’s iMessage and Facebook Messenger, have changed dramatically over the past few months.

These apps, primarily designed for simple conversation, are gradually evolving into platforms for more complex messaging and outside services. The shift can be compared to the move from mobile webpages to apps that took place once smartphones like the iPhone rose in popularity nearly a decade ago.

Google’s new messaging app Allo, for example, integrates the company’s search prowess directly into text conversations. Apple recently launched an entire store just for apps meant to be used within its messaging app, iMessage. And Facebook earlier this year invited companies to design their own chat bots for its Messenger app, which help you shop or book travel plans.

Apple, Google, and Facebook’s messaging apps serve similar purposes, but in different ways. Here’s a closer look at how they differ.

Allo’s biggest asset is its integration with Google Assistant, the company’s conversational new virtual aid that can answer questions and make suggestions.

Allo offers two ways to interact with Google Assistant. In a messaging thread, typing the trigger phrase “@google” will tell the assistant to pay attention to the next string of text you type so that it can answer your query. When making plans with a friend, you might type something like, “@google Show me movie times near me?” to display upcoming showings. You can also chat with Google Assistant one-on-one to ask it questions, set alarms, tell jokes, find news, and remember information like hotel room numbers, among other things.

At this point, Google Assistant adds some convenience to texting by making it easier to retrieve information without having to juggle multiple apps. But for now, it’s only helpful for basic tasks. For finding more complicated answers — like public transportation schedules — you’re still better off using a dedicated search app or web browser.

A crucial difference between Allo and the messaging apps offered by Apple and Facebook is that it doesn’t yet offer third-party apps, although Google is considering doing so in the future. With Allo, you can hunt for nearby restaurants and browse movie times without leaving a text conversation, but you can’t book a table or buy tickets for now.

While many texting apps and keyboards can suggest words as you type, Allo goes a step farther by offering up full replies based on the message you’ve just received. If a sibling sends you a photo of the family dog, Allo might suggest that you say something like “Aww!” or “How cute!” in response. This artificial intelligence-powered feature is part of what makes Allo different than iMessage or Facebook Messenger. These suggestions are on point and natural-sounding for the most part, but I found that in most instances I preferred to type out my own responses unless I was in a rush.

Stickers and expression are also an important part of the Allo experience. There are currently around 25 sticker packs available to download in Allo, which is an especially slim selection compared to the 6,000 sticker collections Facebook Messenger offers. Apple hasn’t said how many stickers are currently available for iMessage, but there are dozens upon dozens in the App Store already. These range from recognizable brand-name characters like Mickey Mouse and Mario to cute animals. The stickers in Allo, comparatively, are made by independent artists and studios.

Allo also has an Incognito Mode, which, as the name implies, is meant to offer more privacy for sensitive conversations. With Incognito Mode enabled, all chats are encrypted end-to-end. You can also choose to make your messages disappear after a certain amount of time has passed. This is similar to the Secret Conversations feature available in Facebook Messenger’s mobile app.

However, many reviewers have criticized Google for not activating this functionality by default, as Apple does with iMessage. Google also stores your Allo conversation history, even though it said it wouldn’t look at your messages when it initially unveiled the app, as The Verge noted. (Google says it does this in order to improve its service, but the company’s advertising-based business model is built around knowing as much about its users as possible.)

Unlike Messenger and iMessage, Allo is only available on mobile, for both iOS and Android. This means you can’t continue your chats on your computer while at work or get notifications on your desktop or laptop like you can with Apple and Facebook’s respective apps.

When Apple unveiled the new Apple TV last year, the company did so with the tagline “The future of TV is apps.” Now it seems the company is taking the same approach to messaging.

The new version of iMessage, which recently launched with iOS 10, includes an App Store filled with apps just for Apple’s messaging app. You could, for example, download The Weather Channel’s app for iMessage to look up the forecast and share it with a friend without switching between apps. Or you might have a few friends vote on which restaurant the group should choose for dinner that night through OpenTable.

Apple’s approach to messaging differs from those of Google and Facebook in that it doesn’t focus on the “conversational interface.” This idea has been front and center in both Facebook and Google’s respective apps. Part of the appeal behind Allo, for example, is that you can ask Google to answer questions or retrieve information for you in the same way you would type a message to a friend. Similarly, thousands of businesses have launched chatbots for Facebook Messenger with the goal of making it easier to use their services through casual communication. But using apps in iMessage largely feels the same as interacting with other apps on your phone, rather than chatting with a virtual assistant or automated bot. You can choose to open an app within the text field of your message or expand it to run in full screen mode.

iMessage has changed in other ways, too. In addition to the new stickers, Apple has added visual effects that Facebook and Google’s apps lack. Some examples include: The ability to send handwritten notes by holding the phone in landscape mode, tapping a word or phrase to replace it with an emoji, and sending a virtual heartbeat to recipient.

Another feature unique to iMessage is the ability to send full screen animations with a text, like a barrage of fireworks in the backdrop of a message that says “Congratulations.” iMessage also allows users to send blurred text or photos that unscramble when the recipient swipes over the message. With the new iMessage, it’s possible to make text bubbles larger or smaller, (Allo offers a similar effect), and tap on a specific in a message within a thread to ‘react’ to it, like you would a Facebook status. Plus, iMessage users can now search for animated GIFs and images with the iPhone’s keyboard by default.

Facebook began integrating third-party services into its chat app before Apple and Google, first introducing Messenger as a Platform in 2015. Facebook took this a step further in April, inviting app makers to create chatbots for its messaging app. There are currently more than 30,000 bots on Facebook Messenger, allowing users to shop, get weather forecasts, and read the news within the app.

When done well, using bots in Messenger almost feels like having personal assistants for specific tasks. The Whole Foods bot, for example, serves up recipe ideas. Shopping app Spring’s bot, meanwhile, will ask you what you’re shopping for and pull up relevant items. The experience is different with each bot. Some will proactively ask you what need help with, while others field questions or send news updates. What each bot does is largely in the hands of their developers rather than Facebook, which is why some bots are more responsive and engaging than others. By contrast, the Google Assistant experience is consistent since Google is in full control.

In addition to chatbots, Facebook also lets third-party apps plug into Messenger. These are different than chatbots in that they’re not conversational, instead working more like iMessage apps. You can, for instance, request an Uber or Lyft when chatting with a friend or send money through Facebook’s payment service without leaving your conversation. Some of these options appear in your in the tool bar above the text field in Messenger, while a larger selection is accessible in the More section. Many of the app integrations currently available for Messenger include different types of keyboards, games, quizzes, and photo apps.

Other than its massive sticker library and selection of third party keyboards, Facebook doesn’t offer many different tools for expression. You can’t, for example, add full-screen animations to a message or tap a word to replace it with an emoji the way you can with iMessage. It did, however, recently gain the ability to start a live video in a conversation and embed polls in group chats.

Facebook Messenger is available for iOS and Android and can also be used on the desktop.

Ultimately, most people will probably opt for the messaging platform that’s most convenient for them. Most often, that’s the app that most of their friends and family members are currently using. This is where Apple and Facebook have a major advantage over Allo. iMessage is baked into every iPhone by default, while Facebook’s Messenger app is among the largest messaging services in the world, boasting 1 billion users. With Allo, Google will have to convince users to download a new app they likely haven’t heard of.

Still, there are reasons to like (or dislike) each app. The ability to search for GIFs and stickers alone is a major step forward for iMessage, which has lagged behind apps like Facebook Messenger in this respect until now. The overall app experience in iMessage, from discovering new apps to actually using them, feels very much like installing regular apps on your iPhone, which Apple fans will likely appreciate.

Messenger, on the other hand, appears to be focused on building the conversational user interface by pushing developers to create chatbots for its platform. It’s still early days for these bots, and the vast majority of them still have yet to prove their worth. Regardless, it’s clear Facebook is focused on messaging, as the app has seen several significant changes over the past year alone. For now, the app’s ease of use and vast selection of stickers remain its biggest strengths.

Allo has potential, but for now it feels more like a testbed for Google Assistant more than anything else. The idea of having a virtual assistant present in chats to help you make plans with friends is helpful and appealing, but it does present some privacy concerns. For now, the lack of third party app integration and desktop compatibility puts Allo behind Messenger and iMessage, although it will be interesting to see how Google Assistant improves over time. 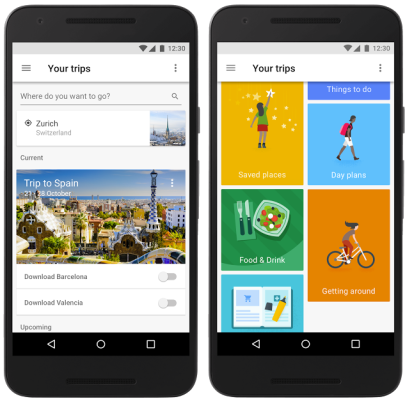 Google's New App Wants to be Your Personal Travel Guide
Next Up: Editor's Pick