First Lady Michelle Obama appeared on The Late Show With Stephen Colbert on Tuesday to discuss her Let Girls Learn initiative, which helps bring resources to 62 million young women who do not have access to education.

Stephen Colbert (as you may have noticed) is not a young girl, but he does enjoy childish things—like blanket forts. Obama stopped his show for a mini-sleepover and the first question Colbert asked her was a slumber party classic: “If you got stuck on a desert island with one famous person, who’d you pick?”

While Colbert picked President Obama, the First Lady had someone else in mind entirely: “Beyoncé!” she said, because she is a very smart woman. “Wait, can I change to Beyoncé?” Colbert joked. Too late, Colbert, she’s taken. Colbert and Obama also shared some healthy snacks, although Colbert had some concerns about eating too many vegetables. “Do you know that if you eat too many carrots, you turn orange? And if you turn really orange, you have to start saying crazy things and run for president,” said Colbert in an apparent dig at Republican presidential nominee Donald Trump.

They also discussed secret wishes, where babies come from, and what they wanted to be when they grow up and Obama confessed that she wanted to be Joe Biden. 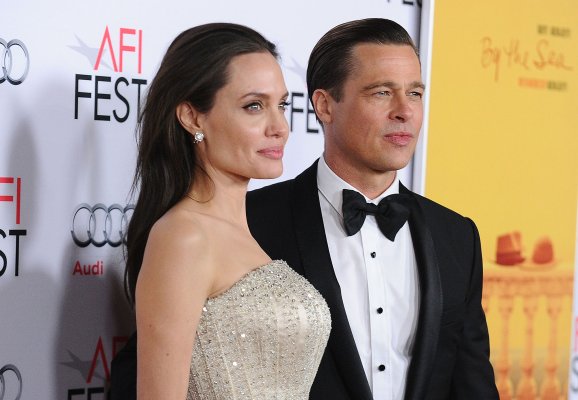 Angelina Jolie and Brad Pitt's Wax Figures Have Officially Split Up
Next Up: Editor's Pick