Excerpted from LIFE Gene Wilder 1933-2016: The Man Who Was Willy Wonka and So Much More. Available at retailers and on Amazon.

It did not take long for a certain writer-director to figure out what made Gene Wilder so interesting on-screen. “When I first met Mel Brooks, he told me that, in his eyes, I was like a sheep surrounded by wolves,” Wilder recalled. That persona would go on to embody three unforgettable characters in Brooks films—the nebbishy accountant Leo Bloom in The Producers; the laid-back, drunken cowboy Waco Kid in Blazing Saddles; and the eponymous scientist in Young Frankenstein. All three characters were surrounded by the comic forces of Brooks’s manic imagination. Wilder remained a calm eye of the storm. That combination delivered a rare brilliance.

They met in a Broadway dressing room, when Wilder was in a play featuring Brooks’s soon-to-be wife, Anne Bancroft. “One day Mel said, ‘Would you like to come to Fire Island with Annie and me? I’ll read you the first 30 pages of a movie I’m writing,’” Wilder told CNN’s Larry King in 2002. “And I went to Fire Island, we went fishing in the surf, came back, had dinner, and then Annie and I sat down and he read 30 pages of Springtime for Hitler. That’s what it was called then. And then he said, ‘Would you like to play that part in the movie?’ I said, ‘Absolutely.’ ”

Springtime for Hitler became The Producers. It took three years for Brooks to raise the money to film it, but Wilder was ready when he came calling. Brooks had what Wilder was looking for in a film. “I love acting, especially if it’s a fantasy of some kind, not naturalism,” Wilder told King. “It’s not that I want to be someone different from me, but I sup- pose it partly is that. I love creating a character in a fantastical situation, like Dr. Frankenstein, like Leo Bloom, a little caterpillar who blossoms into a butterfly. I love that.” The feeling was mutual, and carried them through three iconic movies. “He was a flat-out genius,” Brooks said after Wilder’s death. “He blessed my life with his friendship.”

Springtime for Hitler, the musical? Two Broadway scalawags give it a go

Is it any wonder Gene Wilder was skeptical of Mel Brooks’s ability to get The Producers made? As Brooks remembers, Wilder told him: “You’re doing a play about two Jews who are producing a flop instead of a hit, knowing they can make more money with a flop, and the big number in it is ‘Springtime for Hitler’! Yeah, you’re going to get the money.”

The sarcasm may have been justified, but Brooks eventually did get the money. There was one hitch: Wilder needed to be approved by the film’s star, Zero Mostel, before filming could begin. So they arranged an audition in the offices of producer Sidney Glazier. “The door opens. There’s Mel,” Wilder recalled. “He says, ‘Come on in. Z?’ He calls Zero ‘Z.’ ‘This is Gene. Gene, this is Z.’ And I put out my hand tentatively. And Zero grabbed my hand, pulls me to him, and kissed me on the lips. And all my nervousness went away. And then we did the reading and I got the part, and everything was fine.”

The pairing of Mostel as producer Max Bialystock and Wilder as accountant Leo Bloom proved inspired. Mostel’s manic energy— think of him as a plumper, older Brooks—and Wilder’s subdued nuttiness complemented each other.

Bialystock: What’s the matter with you?

The Producers soared when Wilder’s mousy character let loose. After the two discussed whether Bloom should join Bialystock’s plan to bilk investors in the horrible musical Springtime for Hitler, Bloom tells his future partner in crime “I want . . . I want . . . I want everything I’ve ever seen in the movies!” Replies Bialystock: “Leo, say you’ll join me.” A euphoric Bloom agrees—“I’ll do it! By God, I’ll do it!”—and dances around the erupting waters of the fountain at New York’s Lincoln Center. It’s pure movie magic.

Time said, “The movie is disjointed and inconsistent.” Pauline Kael, in The New Yorker, called it “amateurishly crude.” New York Times critic Renata Adler set a kinder tone, noting that “some of it is shoddy and gross and cruel” but adding that “the rest is funny in an entirely unexpected way.” One point was undisputed. “Gene Wilder,” Adler wrote, “is wonderful.

Gene Wilder wanted to play the lovable, drunken fastest gun in the West the moment he heard about the Waco Kid character in Blazing Saddles. Mel Brooks had other ideas.

“No, I need an older guy—someone who could look like an over-the-hill alcoholic,” Brooks told him. He was thinking of Hollywood vet Dan Dailey, who was said to be as talented at riding a horse as he was at singing and dancing. Dailey begged off. Brooks then asked John Wayne—yes, John Wayne—as well as Tonight Show host Johnny Carson. Both also declined. So then Brooks turned to Gig Young, an Oscar winner, an older man, and, as Hollywood gossip had it, an actor with a serious drinking problem. Brooks thought he fit the role perfectly, and Young agreed to play the part.

The first morning on the set proved disastrous. Young was ill, suffering from what Brooks said was withdrawal from alcohol. An ambulance took Young away, and Brooks—in tears—made a call to Wilder. Brooks told Rolling Stone what happened next. “I heard [Gene] sigh over the phone: ‘I know, Mel, I’m the Waco Kid. You need me, I’II be there.’ This was a Saturday; he flew out on Sunday, tried on the costume, tried on the gun belt, tried on the horse …[laughs] it all fit. By Monday, he was shooting the scene where he’s hanging upside down next to Cleavon [Little]. It all worked.”

Did it ever. “I wanted an old alky. I got a young jew from New York-and he was magnificent,” Brooks said in another interview.

Blazing Saddles, as Time noted in its 1974 review, was about “a hip black sheriff who must overcome racial prejudice and the machinations of a corrupt frontier political machine. “It was also very, very funny. The sheriff­ Cleavon Little-deputized Wilder’s Waco Kid to heIp him tame the Wild West after finding him in a jaiI cell. The two struck an immediate bond.

“One of my favorite lines in the whole movie is when Cleavon asks him, ‘What do you do for fun?'” Brooks told Rolling Stone. “Gene goes, ‘Screw, and play chess.’ And Cleavon says, ‘Let’s play chess.’ It’s all in Gene’s delivery. That’s why it’s so funny.”

Reviews were mixed. The New York Times chided Brooks for not trying harder and said the film had “no dominant personality.” But The Hollywood Reporter said the movie was “brilliantly funny,” adding that “Wilder presents a perfect parody of the gunslinger, with heavily lidded and steely blue eyes and a lethargic self-assurance.” The public liked it, and unlike The Producers, Blazing Saddles was a hit at the box office, with a lifetime gross of$119 million.

Young Frankenstein was born in the sunny climes of New York’s Westhampton Beach. Gene Wilder recalled sitting in his bedroom one day during a spring vacation, a yellow legal pad and a blue felt-tip pen in his hands, writing “two pages of what might happen to me if I were the great- grandson of Beaufort von Frankenstein and was called to Transylvania because I had just inherited the Frankenstein estate.” What happened became one of Wilder’s most successful films, both with critics and at the box office.

That evening he called Mel Brooks and read him the outline. “Cute,” Brooks said. “That’s cute.” And he left it at that.

Months passed, and Wilder got a call from his agent asking if he had any ideas for a film for himself, Peter Boyle, and Marty Feldman. Why that particular combo? Because the agent happened to represent all three.

“Well, that’s a wonderful, artistic reason to make a movie,” Wilder said with a smile, and then told the agent he might have something. He sent him the scene of Frankenstein’s grandson meeting a servant named Igor at Transylvania Station; the agent liked it and said Mel Brooks would be the perfect director. Wilder said Brooks might not go for it; the agent contacted him anyway.

So Brooks called Wilder. “What are you getting me into?” Wilder recalls him saying. “I don’t know, I don’t know—I’m telling you, I don’t know.”

The next day Brooks knew; he agreed to direct. Wilder speculated that money may have had something to do with it. Brooks was looking for a hit; he had made only $50,000 each on two of his previous films, The Producers and The Twelve Chairs. The agent was happy too—Boyle was signed to play the monster, and Feldman would play Igor next to Wilder’s young Dr. Frankenstein. Along with Cloris Leachman as the housekeeper, Frau Blücher; Madeline Kahn as Frankenstein’s young socialite fiancée; and Teri Garr as Inga, a personal assistant, they would create one of Hollywood’s great comic ensembles.

Wilder, who co-wrote the film with Brooks, was particularly proud of a scene that Brooks, at first, said would never work: a song and dance routine to “Puttin’ On the Ritz” with Dr. Frankenstein and the monster. “Are you crazy?” was Brooks’s initial reaction. But after Wilder argued for almost half an hour in favor of the bit, Brooks left it in—figuring if Wilder was so passionate about it, it must be right. 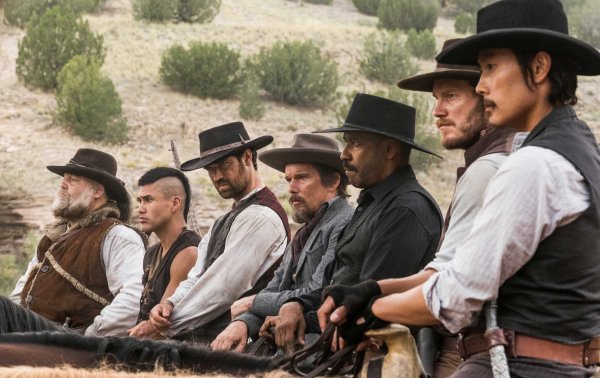 Once Cool Magnificent Seven Now a Middling Septet
Next Up: Editor's Pick